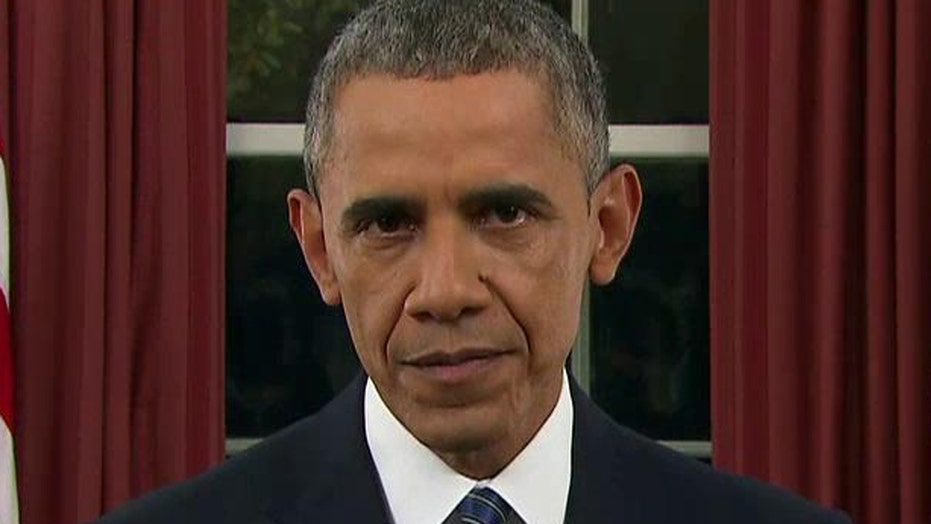 Obama addresses the nation from the Oval Office

Ben Franklin said that death and taxes were the two certainties of life. A third certainty in our country used to be strong leadership from the individual in the Oval Office. Abraham Lincoln, F.D.R, John F. Kennedy, Ronald Reagan and many others have used their position as our commander in chief to exude America’s strength on the world stage and promote our nation’s unique exceptionalism.

However, on several recent big issues, President Obama has not taken the challenging, but necessary step up to the plate to demonstrate why America needs to lead in the world. His actions instead seem to suggest that we can lead from behind, which goes against everything that our country has stood for in the past.

The best example of this is President Obama’s utter failure to address the danger that ISIS presents to the United States. Their sickening attacks in Paris are still fresh in our mind, but it is important to note that just hours before the terrorists attacked the city, President Obama said that ISIS was “contained” and “on the run.”

Following the attacks, instead of stepping forward and adopting an aggressive strategy to take the fight to ISIS, the president deferred and continued to give off the impression that our current strategy to combat radical Islamic terrorism is working. His response showed that he is either delusional to the real threat ISIS presents our nation or he is simply incapable of providing authentic leadership for the sake of the country and the globe.

For generations, when the world faced a dangerous force or an intimidating challenge, the United States of America has been the nation to step forward and provide leadership. If we want to continue being a unique and exceptional nation, that is a principle that we cannot abandon, especially right now with the seriousness of the threats facing our country and the world.

Then last week, following the devastating tragedy in San Bernardino, President Obama immediately leapt to blame gun laws and Republicans, when in fact the attacks appear to have been perpetrated by ISIS sympathizers. The fact that the President would try to score political points instead of committing to once-and-for-all going after America’s greatest threat is emblematic of his entire presidency, putting politics and party before country and leadership.

While it seems President Obama has already checked out on his White House responsibilities and is looking forward to writing his memoirs and building his library, the absence of American leadership has now become a defining issue of the 2016 presidential election.

On one side, there are Republican candidates who all know and understand that America must operate from a position of strength, and adhere to the ideas espoused by Ronald Reagan about leadership and action. They will all say what needs to be said, do what needs to be done, and lead when the world needs to be led.

On the other side, there is Hillary Clinton, President Obama’s former Secretary of State and the architect of his disastrous foreign policy agenda who also jumped at the chance last week to put political points on the board, instead of promoting a strong strategy to defeat ISIS. Secretary Clinton’s lack of understanding about ISIS was crystal clear at the most recent Democratic debate, when she said that the fight against ISIS “cannot be an American fight.”

Secretary Clinton, it must be an American fight. For generations, when the world faced a dangerous force or an intimidating challenge, the United States of America has been the nation to step forward and provide leadership. If we want to continue being a unique and exceptional nation, that is a principle that we cannot abandon, especially right now with the seriousness of the threats facing our country and the world.

For the past seven years, we have seen what it looks like when America doesn’t take charge, but instead sits in the backseat as a global observer. As a result, our country is less safe, less secure, and people have a rational fear of another heinous act of terrorism coming to our shores.

Instead of electing someone such as Hillary Clinton, who outlined President Obama’s global agenda and agrees with his worldview, we need to elect a president that understands the importance of American leadership, and will reassert our nation as the leading force for good in the world.

Republican Scott Brown represented Massachusetts in the United States Senate from 2010-2013 and served as the United States Ambassador to New Zealand and Samoa from 2017-2020. He is currently the Dean, President and CEO of New England Law | Boston