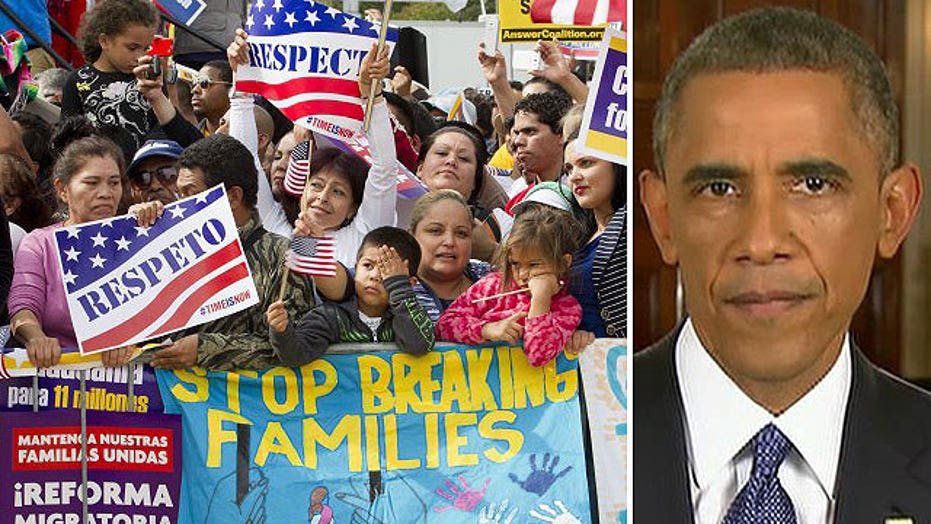 What's so amazing about this stunning news, coming less than three weeks after a historic Republican landslide and repudiation of Obama's policies, is the tragic effect this decision will have on his most loyal group of supporters: African Americans.

On November 4, Election Day, only a little over two weeks ago, Obama got 89% support from black voters. Yet amnesty for illegals is a direct assault on his core supporters. I couldn’t think of a more dangerous or damaging plan towards African Americans than the one being carried out by Obama.

Let me be blunt. As a successful businessman, Obama’s plan to give amnesty to millions of illegal aliens will not greatly affect my life. However, it will it crush the lives of millions of poor and lower income black Americans, especially those striving and working hard to escape poverty and achieve the American dream.

After six years of Obama’s presidency, African-American unemployment is more than double that of whites.

It's obvious that Obama’s policies haven’t provided jobs for black voters. But he has provided record levels of welfare, food stamps, disability and other handouts from government.

Is this a man out to help you? With friends like this, who needs enemies? But I digress.

It’s about to get worse, far worse. Obama’s imminent amnesty plan will allow millions of illegal immigrants to compete for jobs at the lowest rung of the economic scale, a disproportionate number of whom are black Americans.

With total disregard for their welfare, hopes, or dreams, Obama will snub his nose at all struggling lower-middle income Americans by allowing millions of uneducated, hard working, desperate-to-support-their-families illegal immigrants to legally fight them for low wage jobs.

After Obama finishes his dirty illegal amnesty deed, many poor black Americans will either have a hard time ever finding another job…or the wage pressure created by all these new job seekers means any black American with a low-wage job will never again see a raise. And, forget about the prospects for young people without college degrees ever finding employment at any wage (another group that strongly supported Obama in both his presidential races).

Well guess who agrees with me? Barack Obama himself. Obama wrote in his book, “The Audacity of Hope” that illegal immigration harms the wages of blue collar workers -- especially black Americans; depresses wages; and strains the overburdened safety net. That’s what Senator Obama said in his own book in 2006.

Why would President Obama want to harm blue-collar workers and depress wages?

Is Obama a racist out to keep black Americans hopeless, helpless and dependent on crappy government checks for the rest of all time?

I can’t tell you what’s in his heart. But I can tell you -- Obama is no friend of black Americans.

The next time black Americans walk into a voting booth, they should remember it’s Obama and the entire liberal Democratic political establishment who stays in power by keeping their voters poor and dependent.

By the way, if a white Republican conservative supported policies that hurt black Americans; that resulted in more than double black to white unemployment; that allowed in millions of competitors for the jobs of black Americans; what would black leaders like Al Sharpton or Jesse Jackson say? You can bet dollars to donuts they'd be marching on Washington DC right now, calling that white Republican president a "racist."

Folks, if someone hits and hurts you once, you can argue it's a mistake, or coincidence. But when he keeps hurting you for six long years while claiming to be your friend, it's time to admit he's not on your side. It's time to realize with friends like Obama, who needs enemies?

And when your best buddy…who gets 89% of your support…goes out of his way to kill your job prospects for generations to come…that's called:  "The Audacity of a Dope."