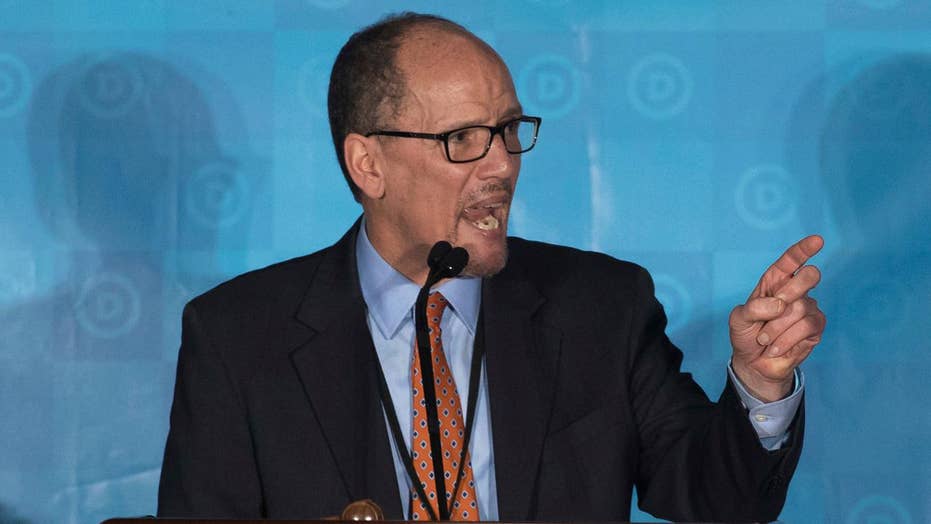 Can the Democrats unite behind DNC chair Tom Perez?

Now that President Trump has delivered his State of the Union-style address, my fellow Democrats are settling in for a long fight. Our new DNC Chairman Tom Perez is leading the charge, promising to be a “nightmare” for the president and his fellow Republicans.

The reason is clear: Mr. Perez tastes political blood in the water. Trump’s approval rating is at historic lows, hammered by allegations of Russian collusion, a contentious immigration ban, and emotional Twitter outbursts.

Yet smart Democrats know that our position with the American people is just as weak. We hold the fewest number of state legislatures, governorships, and federal offices than at any point since the 1920s. And it’s a trend that started well before the 2016 election.

In short, America isn’t buying what Democrats are selling.

The reasons for this are numerous, and they include efforts by Republicans to suppress voters in North Carolina and gerrymander Congressional districts in Wisconsin.

But finger pointing at GOP operatives hides a much more painful truth.

Six weeks ago, the U.S. Senate considered an amendment that would have allowed Americans to import cheap prescription drugs from Canada. This common sense solution would have saved families thousands of dollars – and lives. Not surprisingly, 72 percent of voters supported the proposal.

Yet the amendment failed, with 14 Democratic Senators rejecting it.

What could explain their vote? Cynics highlight the fact that many of these officials collect large sums of campaign cash from pharmaceutical giants. Top collectors of drug money include Senators Cory Booker (D-NJ), Patty Murray (D-Wash.), and Michael Bennet (D-Colo.), all of whom voted against the bill.

Fair or not, this leaves voters with a very clear impression: Democrats are more interested in securing their reelection than helping sick Americans.

Regrettably, this wouldn’t be the first time we’ve been accused of abandoning principles for profit.

Starting in the mid 1990s, President Clinton and other Democrats embraced free trade deals – first NAFTA and then with China – despite clear warnings about the damage both would cause manufacturing America.

As it turns out, the alarms were well placed: studies have shown that these trade deals have left many communities throughout the U.S. in poverty and deeply mired in unemployment.

Why then were we surprised when these voters turned down Secretary Clinton considering her support for not only the trade deals but also the bankers who benefitted from them?

All told, many Americans have come to view us as hypocrites. And I don’t blame them. We are Perez’s nightmare.

Which leaves us with a critical question: how can Democrats win back these angry voters?

Contrary to Perez’s recent statements, it’s not about “communicating our affirmative message.” It’s about an apologizing for what we’ve done – or chosen not to do.

Let’s start with trade. For 20 years, my fellow Democrats have advanced global deals that left too many behind, particularly in rural and blue collar America. We discardeded our roots as champions of the working class in exchange for campaign contributions.

For that, America, we are sorry. We failed you.

While we’re at it, let’s be honest about how we’ve tackled environmental issues. For 20 years, our important and virtuous commitment to a healthy planet wasn’t properly balanced with the needs of workers in places like Appalachia and the Pacific Northwest. In other words, we shut down the coal and timber industries without a plan to safeguard the communities left behind.

For that, we are sorry. Democrats let you down.

Finally, we have failed the country in the realm of national security. For the past 20 years, our repeated mistakes in Iraq, Libya, and Syria have left American families with more death and less stability. These botched conflicts have also pushed refugees – and terrorists – on a chaotic march around the globe.

For that, we are sorry. We have blood on our hands.

Yet apologies ring hollow without a remedy. We have to repair the harm that we’ve caused in order to inspire a new beginning. Elected leaders like Rep. Tulsi Gabbard (D-Hawaii) and Indiana Mayor Pete Buttigieg are offering intriguing paths forward while Democrats like me are outlining initiatives like “Our American Oath.” This effort – to be launched in the coming months – promises a new covenant with the American people.

Without question, this approach of apologies and making amends is horrifying for hyper-partisan Democrats. In some cases, they (correctly) believe Republicans share equal blame. In other cases, it’s simply because they hate apologizing. I fully expect this to be their response.

And so does science.

In a book wonderfully titled, “Mistakes Were Made (But Not By Me),” the authors reveal that our brains are hardwired to make us believe we are always right, even if faced with overwhelming evidence to the contrary. Unfortunately, no one escapes this basic element of human psychology.

But believing we’re perfect takes a toll. In our personal lives, righteousness causes us to abandon or be abandoned by the people we cherish the most – family, friends, and partners.

It’s no different in our political lives. Just ask the voters in rural America and the Rust Belt who stayed home or voted for Trump in 2016. Or ask the voters who have punished us by reducing our power to the lowest levels since the 1920s.

All of which leaves the Democratic Party with an important choice. We can apologize and make amends, or we can walk down Perez’s path of nightmares.

If we follow Perez, rest assured that we will continue to lose. Why? The humble majority of this country will grow ever more exhausted, first by Trump’s fiery antics and then by our knee-jerk partisanship.

Alternatively, we can choose to be men and women who inspire integrity and humility. With an apology and better path forward, we can do something unique in American history: we will show that not only can we win an election but that we deserve to.

We will give America something to vote for, not against.