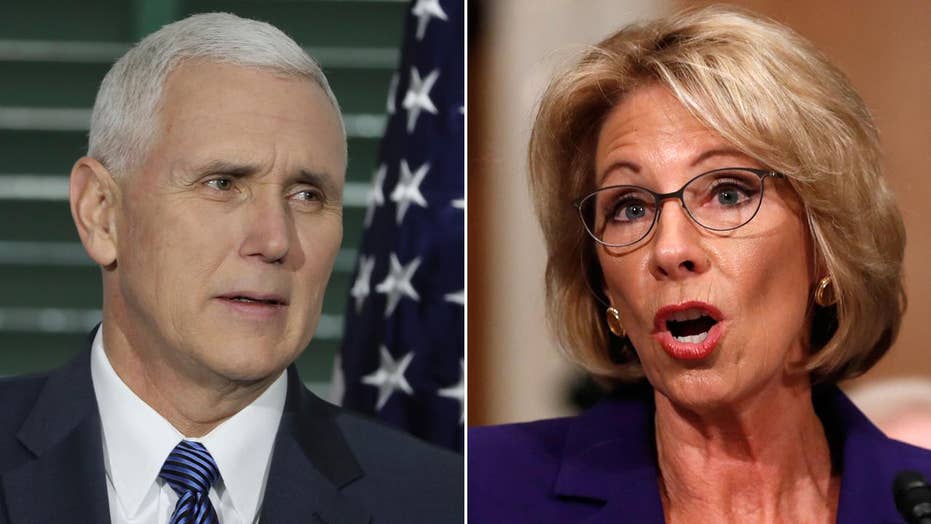 Democrats have worked very hard this week to derail the nomination of Betsy DeVos as Secretary of Education. What are they so afraid of?

Betsy DeVos, Trump’s pick for Secretary of Education, faces a Senate vote Tuesday.  Two GOP senators have joined ranks with Democrats to block her appointment; if one more piles on, DeVos would be the first cabinet nominee in 28 years to face rejection by the Senate.

Imagine that. A woman who has devoted much of her life to improving our country’s broken schools is deemed unworthy to head the Department of Education. Why this resistance?

Because she, like President Trump, has vowed to disrupt the status quo.

Nowhere is that prospect more needed than in our education system, and nowhere will it be more bitterly fought.

Supporters of the teachers unions successfully fended off the early reform attempts by President Obama and Arne Duncan; they will not be any kinder to Mrs. DeVos.

This is unacceptable. Our public schools are not only failing our most disadvantaged kids, denying them a rung up on the ladder of opportunity, they are also failing the nation.

American students are underperforming their international counterparts, threatening our ability to compete with foreign rivals. The status quo is indefensible.

At a time when hypocrisy is flowing waist-deep, the opposition to Betsey DeVos stands out. Mrs. DeVos is a champion of school choice, and has spent enormous time and money working to improve education outcomes for disadvantaged children. Nonetheless, Trump’s pick as Secretary of Education has faced one of the toughest confirmation battles endured by any of his nominees.

She is criticized because she has not worked in the public school system. That history gives her independence and a different perspective – a perspective not welcome by those protecting the status quo.

Joining ranks with resistant Democrats are Senators Lisa Murkowski and Susan Collins. Both have received campaign donations from the teachers unions; both have earned straight A’s on union report cards since 2014.

Both claim their offices have been swamped by calls objecting to the DeVos nomination. Yes, that’s what the teachers’ unions do. They mobilize their millions of members in support of…themselves.

The NEA, for instance, invites its 3 million members to tell your senator “to vote NO on Betsey DeVos” by checking a box on its website. They will take care of the rest.

What are the teachers’ unions afraid of? They fear reform; they fear the Trump administration will overhaul the rules and procedures that discourage accountability and protect the lifetime employment of underperforming teachers.

Donald Trump has called our school system “broken”; he is correct. The most recent survey by the National Assessment of Educational Progress reports that only 25 percent of our high school students are ready to tackle college-level work in math, and only 37 percent are capable of college-level reading assignments. Both scores were lower than in 2013; we are going in the wrong direction.

According to DOE statistics, nationally only 32 percent of our eighth grade students met the standard for proficiency in math and 33 percent achieved that level in reading. But the worst news is from our inner cities.  In Detroit, 96 percent were not up to speed in math, and 93 percent fell below par in reading. That is in spite of 2014 spending per pupil of nearly $15,000. Results from Baltimore, Fresno, Philadelphia and Cleveland are not much better. How can anyone defend such shocking failure?

These are not some abstract report cards; these are statistics that reinforce income inequality, denying disadvantaged kids a foothold on the economic ladder. More important: behind those stats are children whose fate is sealed the minute they step inside a failing school.

Broken schools are also a threat to our international competitiveness. Recent testing again showed our kids losing ground internationally. The 2016 PISA report came out in December. U.S. students rank below the average of those in 70 other nations in math, and only about average in reading and science. Specifically, in science the U.S. ranked 19th of 35 OECD countries, 20th in reading against that same group and 31st in math.

For example, U.S. students did worse than the students of Estonia. Why should you care? Because we spend on average $115,180 per student between ages 6 and 15, almost twice as much as that spent in Estonia.

Our kids also underperformed those in Germany and Canada, despite our spending 20 percent more on education. And while it is true that about 11 percent of the U.S. students sitting for the exams are “disadvantaged,” and 23 percent are from immigrant backgrounds, other countries like Hong Kong, with 23 percent disadvantaged and 35 percent immigrant populations, still outscored us.

The shortcomings of our schools should not be a Republican issue or a Democratic issue; it should be a national issue. When U.S. companies have to go overseas for workers because we lack qualified candidates, that’s a national problem.

When kids are denied a shot at the American dream, it’s a national disgrace.

If the Senate denies Mrs. DeVos confirmation Tuesday, that will be a national embarrassment.