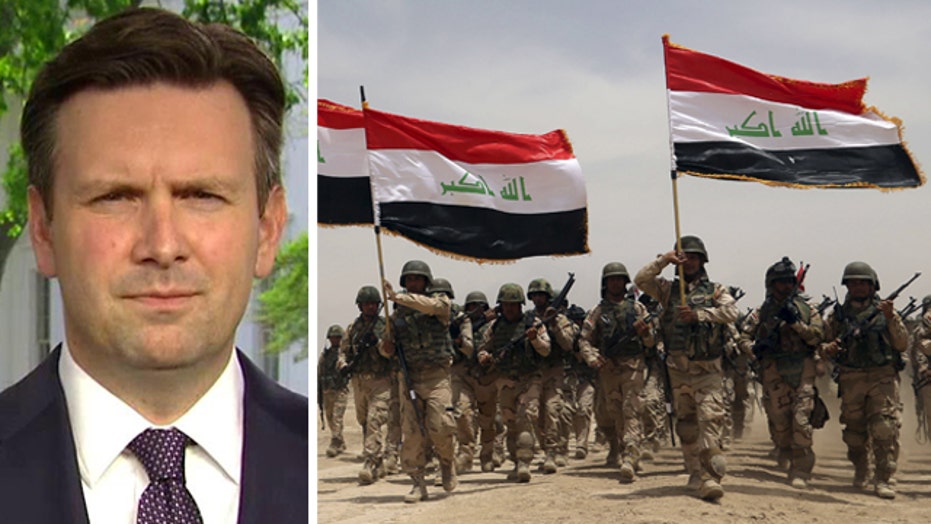 White House: Our ISIS strategy is to support the Iraqi gov't

There have been a lot of compelling arguments made since the disastrous fall of the Iraqi city of Ramadi to ISIS last weekend that it is time for the President Obama to adopt a coherent strategy to defeat ISIS that includes sending ground troops to fight alongside the Iraqi army.

Kimberly and Fred Kagan, the smartest people I know on this issue, said in a Washington Post article last week that President Obama has no Iraq strategy and called on him to send “a few thousand additional combat troops, backed by helicopters, armored vehicles and forward air controllers able to embed with Iraqi units at the battalion level, as well as additional Special Forces troops able to move about the countryside.”

While I mostly agree with the Kagans, they are not acknowledging two realities about President Obama’s approach to ISIS and the crisis in Iraq and Syria.

First, Mr. Obama does have an Iraq strategy.  It is to do as little as possible about this crisis for the rest of his presidency so he can hand this mess to a future president.

Many will argue that since President Obama doesn’t want to win in Iraq, we should pull our troops out. I believe this would be a mistake

He only reluctantly agreed to send military advisers to Iraq and approve airstrikes because he was forced to by ISIS atrocities.  This has been followed by constant spin by Obama officials exaggerating the effectiveness of the president’s Iraq policy and dismissing ISIS gains.

The most recent example was when President Obama said this week “I don't think we're losing" after he was asked about the fall of Ramadi during an interview with The Atlantic.

Even worse was Mr. Obama’s ludicrous statement on Memorial Day that "Today is the first Memorial Day in 14 years that the United States is not engaged in a major ground war," a claim that is technically true because the 3,000 military advisers he sent to Iraq are restricted to bases and the attacks that the United States is staging in Iraq and Syria are being conducted by the U.S. Air Force and special forces.

Second, the president also is trying run out the clock in Syria but the results may be far more dire.  Due to major gains on the ground by ISIS and the Al Nusra Front (an Al Qaeda affiliate) over the last few months, the Assad regime is in danger of collapse. Limited U.S. airstrikes and the current effort to arm and train a small number of moderate Syrian rebels to fight ISIS will be too little and too late to affect the Syria situation.

If Assad falls, the bloodletting in Syria and the conversion of Syria into an ISIS-controlled terrorist state will have huge repercussions for regional and global security.

So what can be done about Iraq, Syria and ISIS given the restrictions that President Obama has placed on U.S. forces?

Concerning Iraq, I believe there are several things the U.S. can do to reverse ISIS gains that President Obama might agree to such as directly arming the Iraqi Kurds, stepping up the training and arming of the Iraqi army, and arming Sunni militias.

Airstrikes against ISIS targets in Iraq should be significantly increased.  (Why didn’t we bomb the ISIS “victory parade” in Ramadi this week?)  The U.S. should also send more special forces and military advisers.

Although President Obama probably will continue to refuse to allow U.S. troops to engage ISIS in combat (other than an occasional special forces raid), he might agree to allow U.S. military advisers leave their bases and accompany Iraqi forces into the field.  This could allow them to shore up the morale of Iraqi soldiers and better coordinate airstrikes.

Former Defense Secretary Robert Gates proposed such changes last week, calling on Mr. Obama to allow U.S. troops to operate behind the lines in Iraq and support Iraqi security forces.  He would let U.S. troops serve as forward air controllers and spotters.  Gates also believes U.S. military trainers should be embedded down to the battalion level in Iraqi security forces and also work with Sunni tribes in Anbar Province and with the Iraqi Kurds.

Continuing tensions between the Shiite government in Baghdad and Iraqi Sunnis is a major obstacle to defeating ISIS.  Many Sunnis are supporting ISIS because they are more afraid of the Shiite government and Iranian-trained Shiite militias.  This fear grew when Shiite militias engaged in mass looting after they took the Shiite city of Tikrit from ISIS at the end of March.  The perception that the government did not do enough to defend Ramadi may further fuel Iraqi Sunni estrangement with Baghdad.

The U.S. must pressure the Baghdad government to resolve these tensions and bring Iraqi Sunnis into the fight against ISIS.  This must include demanding an end to the government’s reliance on Iranian military support since Iran’s presence in Iran is driving up support for ISIS by Iraqi Sunnis.  The Obama administration also must stop using Iran as a proxy to fight ISIS in Iraq.

The Obama administration must do more to target ISIS by expanding counterterrorism efforts and airstrikes against it everywhere it is operating, including in Libya.  The U.S. should work to step up efforts with our European allies to stop the flow of foreign fighters to Iraq and Syria.  ISIS funding sources should be targeted, including by bombing oil facilities it has captured.  There also must be a robust effort to counter ISIS propaganda on the Internet.

These measures could help reverse ISIS gains in Iraq.  However, they will not defeat ISIS because it will still be based in Syria and will continue to expand its control of that country.  Only a large international force can defeat ISIS in Syria and restore order.  Since there is no chance this will happen, I believe ISIS and the al-Nusra Front will eventually seize control of Syria and oust Assad.

We need to recognize that Syria is lost and prepare for the coming catastrophe when Assad falls.  There will be a huge number of refugees trying to escape a new ISIS government.  There is a strong prospect of widespread atrocities, including beheadings, against supporters of the Assad regime and Christians.  An ISIS victory could also lead to an influx of foreigners traveling to Syria to join it and the country becoming a terrorist safe haven that could profoundly alter regional and global security.

The United States needs to begin an international dialogue on the coming collapse of Syria, ways to prevent this, and contingency plans for a collapse.  Creating humanitarian safe zones needs to be considered, although finding states to send troops to defend them will be difficult.

ISIS captured Ramadi despite being vastly outnumbered by the Iraqi army because of poor leadership, poor morale, lack of weapons and ineffective U.S. airstrikes.  Although I do not see a viable way to defeat ISIS in Syria, the steps outlined above could reverse ISIS gains in Iraq despite President Obama’s feckless foreign policy.

I concede that much of what I am proposing is a holding action until a new American president is in office who is prepared to lead.  Many will argue that since President Obama doesn’t want to win in Iraq, we should pull our troops out.  I believe this would be a mistake because ceding Iraq to ISIS would have profound and long-lasting implications for global security that we would have to confront down the road.

Fred Fleitz is senior vice president for policy and programs for the Center for Security Policy. He worked in national-security positions for 25 years with the CIA, the State Department, and the House Intelligence Committee.  Follow him on Twitter @fredfleitz