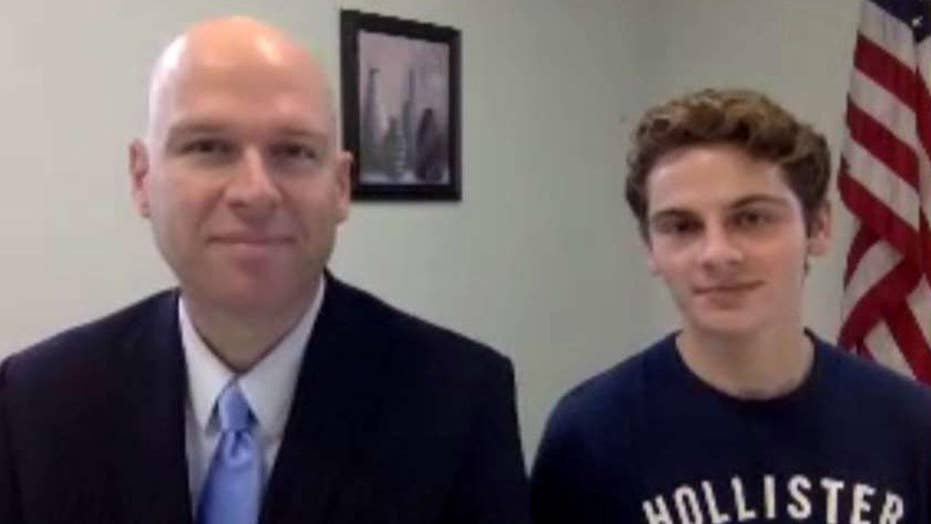 Illinois valedictorian says his high school forced him to remove Jesus references from his graduation speech; the graduate speaks out on 'Fox & Friends.'

Mere minutes before Sam Blackledge should have given his valedictory address in front of his loved ones and classmates May 19, the principal of West Prairie High School in Sciota, Illinois took him aside.

Blackledge, 18, was presented with a terrible choice: censor his speech, removing any religious references, or don't speak at his own graduation. Blackledge earned the right to speak to his classmates as valedictorian. He believes this achievement – his 4.0 GPA – would not have been possible without his faith.

The student told Fox News that he was specifically barred from mentioning Jesus Christ in his speech because “the principal told me it wasn’t appropriate for the setting.”

“The most important thing in my life is Christ,” Blackledge told Fox News. “Christ is the only reason I was a valedictorian. He’s the reason I got that 4.0. If it wasn’t for him I wouldn’t be up there. I was giving him the credit for that.”

What is so dangerous about a young man having the humility to acknowledge that his success would not have been possible without his faith that he must be kept from the podium?

The young man should have been congratulated for his academic achievements and his speech, with themes of the triumph of justice, love, and forgiveness over evil. Instead, on what was supposed to be a joyous day for Blackledge and his family, misunderstanding and fear triumphed over love and freedom.

That school officials would censor Blackledge’s speech and deny him the freedom to share this essential part of his identity with his loved ones and classmates is inexcusable.

How many more high school graduations must be ruined by school officials who, by misunderstanding or intentional act, deny their pupils their constitutional rights to freedom of expression from the schoolhouse gates all the way through the graduation ceremony?

What is so dangerous about a young man having the humility to acknowledge that his success would not have been possible without his faith that he must be kept from the podium?

Why is this reference to his religious identity treated any differently than another student crediting a family member for his achievements?

School officials have us believe that humility is apparently offensive on the one hand and on the other it is virtuous.

No one thinks that a school owns the content of private speech by a valedictorian just because it occurs on school property. But even if someone thought such a misunderstanding could occur, school officials could have clarified the matter, as the U.S. Department of Education suggests, by making “appropriate, neutral disclaimers to clarify that such speech (whether religious or nonreligious) is the speaker’s and not the school’s.”

Judge Frank Easterbrook writing for the 7th U.S. Circuit Court of Appeals in the 1993 decision of Hedges v. Wauconda Community Unit School District, explained that, rather than censor religious speech, it is far better for schools “to educate the audience rather than squelch the speaker.”

The judge explained in the decision that if a school district cannot teach the difference between providing a forum for private speech and school-sponsored speech, it is doubtful that the school is capable of teaching anything at all.

It’s unfortunate that Blackledge’s school did not heed Judge Easterbrook’s important instruction: “Schools may not prohibit their pupils from expressing ideas. And no arm of government may discriminate against religious speech when speech on other subjects is permitted in the same place at the same time.”

First Liberty Institute, which represents Sam Blackledge, is working to ensure future valedictorians aren’t denied their freedom. We’ve asked the school to apologize to him for ruining his only high school graduation. In addition, we’ve offered to meet with school officials to help them craft policies that will ensure what happened to Blackledge doesn’t happen to anyone else.

When all religious speech is censored then the purpose of education – and the First Amendment – is frustrated. Not only is the speaker deprived of his or her right to free expression enshrined in our Constitution by the founders as the very first liberty protected, but others are robbed of the benefit of hearing a meaningful message.

The founders enshrined religious freedom and free speech in the First Amendment because they believed that we grow from hearing perspectives we may not share and sharing our beliefs with others.

Ours is a nation founded by a people persecuted for their humility in acknowledging that their success would not have been possible without something greater than themselves.

We can hardly expect our high school graduates to fight for our country, to defend our values abroad, or to choose the next leaders of our nation when we censor viewpoints that school officials might not agree with up to, and including, the day they graduate.

It’s too late for Sam Blackledge, but there will be more valedictorians in the future. Perhaps Blackledge’s lasting legacy will be that his is the last speech to be unconstitutionally censored by school officials who wrongly believe, as Judge Easterbrook put it, “that the best defense against misunderstanding is censorship.”

Neal Mehrotra is a student at The George Washington University Law School and legal intern at First Liberty.