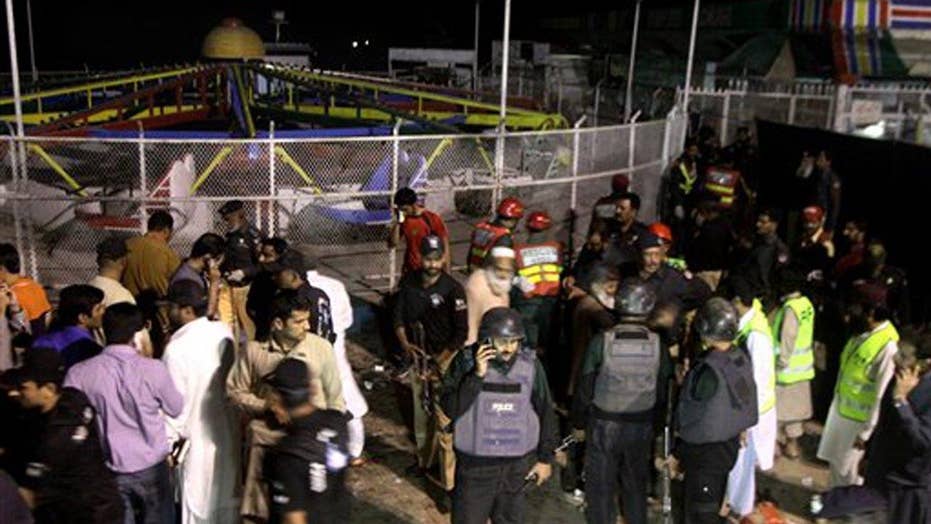 Authorities say most of the victims are women, children

“Jamaat-e-Ahrar, a splinter group of the Pakistani Taliban, claimed responsibility for the attack, saying that it had targeted Christians.” The paper then went on to report that “Pakistani officials were skeptical about the claim, as most of those killed and wounded were Muslims. But because Sunday was Easter, a large number of Christian families had come to the park.”

In majority Muslim Pakistan, a country where anti-Christian sentiment is a numbing fact of daily life, no one should be surprised that the Pakistani government would seek to downplay the targeted Easter mass murder of Christians in the Punjab.

What was shocking, however, was that the initial statement by National Security Council Spokesperson Ned Price failed to mention that the terrorist group taking "credit" for the carnage was targeting Christians. Here’s his statement:

“The United States condemns in the strongest terms today’s appalling terrorist attack in Lahore, Pakistan. This cowardly act in what has long been a scenic and placid park has killed dozens of innocent civilians and left scores injured. We send our deepest condolences to the loved ones of those killed, just as our thoughts and prayers are with the many injured in the explosion. The United States stands with the people and Government of Pakistan at this difficult hour. We will continue to work with our partners in Pakistan and across the region, as together we will be unyielding in our efforts to root out the scourge of terrorism,”

Twenty-four hours later White House Press Secretary Josh Earnest did acknowledge that Christians were targeted in Pakistan on Easter though he was quick to add that the majority of the victims were Muslim.

The fact is that the Obama administration’s legacy when it comes to terror attacks has been to avoid highlighting or even acknowledging the Islamist theology of hate that is a common denominator and motivator of unspeakable crimes against humanity launched by ISIS, Al Qaeda, Al Shabab and Boko Haram in Europe, Africa, the Middle East, Asia, and yes, the United States.

Tragically, the initial failure by the U.S. to acknowledge that the suicide bomber who blew himself up among the swings and sliding ponds was looking to murder and maim Christian families, is not surprising.

While public opinion long ago connected the dots of Islamist anti-Christian propaganda to their genocidal actions in Syria and Iraq, it took a congressional resolution to finally force Secretary of State John Kerry to recently admit that yes, Christians and Yazidis were victims of an attempted genocide. And, for decades, Europe’s elite had their eyes wide shut to the hate burgeoning Islamist networks in their own cities and are only now playing a deadly game of catch up.

The disgraceful NSC statement on Sunday wouldn’t have made any difference to the terrorists, so at this late stage in the Obama administration, what difference does it make how the latest atrocity is characterized by Washington?

For one thing, an emphatic and empathetic statement from the White House would have sent a message of solidarity to the beleaguered Christians of our sometime ally Pakistan.

Secondly, Lahore was not the first, only the latest site for Islamist fanatics targeting religious minorities, and not just Christians.

Sky News is now reporting that ISIS militants recently arrested in Turkey revealed their (active) plans to attack Jewish kindergartens in that country and to attack (again) Istanbul’s Great Synagogue.

Embedded in the DNA of the Islamist fanatics is a theologically fueled and validated hate for the “Kafir” (a person who is not Muslim).

There are countless plots in the terror pipeline, on every continent targeting Muslims and non-Muslims alike who dare to stand up to the fanatics.

But just how do we go about killing the message along with the genocidal messengers without attacking the cancerous DNA?

Does anyone other than the President Obama believe anymore that refusing to call out Islamist terrorism for what it is will somehow empower and win the day for truly peaceful and moderate Muslims?

Here we are now, caught in a trap of our own making. The price of our failure to deal with genocidal hate head-on recalls a dire warning from an ancient Jewish Midrash that teaches: “Whoever shows mercy to the cruel, will in the end be cruel to the Merciful.”