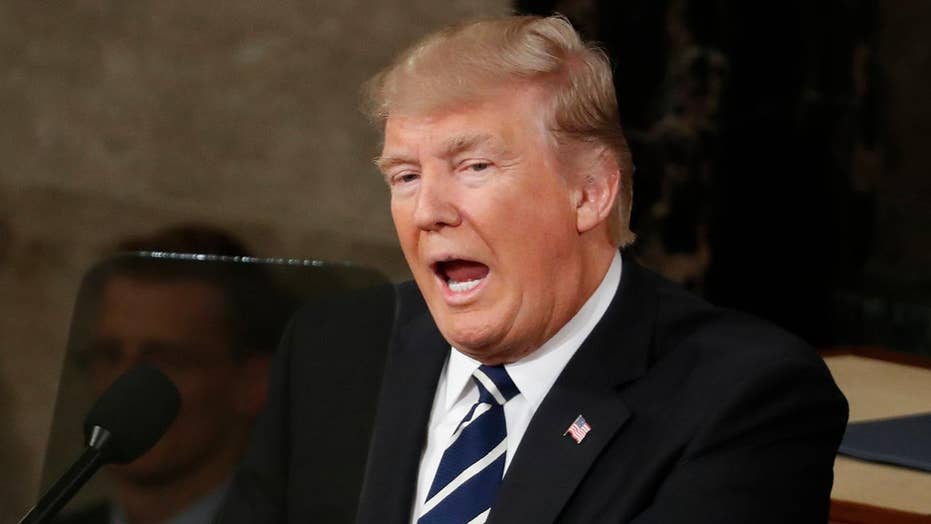 Will Trump's first SOTU be a defining presidential moment?

The 'Outnumbered' panel debates what to expect from the president.

Here comes the State of the Union.  Want plain talk?  The State of our Union is – too emotional.  Despite a roaring economy, rising national security, tax relief and shrinking government, half the nation is now programmed for emotional overreaction.

Worse, half our leaders condone it, even participate in it, having decided that’s where the votes lie, in pushing emotional disunion.  In plain English:  They are wrong.  The average American is getting tired of this perpetual venting, sniping, disparagement of facts, and recourse to raw emotion.

In Davos, President Trump was cheered, not jeered.  It was a brave trip.  His candor produced new honesty among friends, aligning with his straight talk on Jerusalem, balanced trade, the imperative of border security, ending United Nations waste, urging NATO to pony up for their defense, and China’s assistance on North Korean sanctions.

In Syria, Islamic State has been virtually eradicated, a 180-degree reversal on the last administration.  In the Persian Gulf, Iran no longer harasses U.S. Navy ships, another dramatic turnabout.  Truth, reason and integrity are powerful persuaders, at home and abroad.

Maybe the best quotes in that speech could be borrowed from the Bible or a past president, something about unity being essential for “one Nation under God.”

But still, part of America is determined to supplant these positive facts with destructive emotions.  That is our Union’s greatest threat, reckless appeals to disharmony and dissolution, bold disaffection for fellow Americans, and the championing of disunion.

Hollywood will host an “alternative” State of the Union speech, no doubt filled with newly recycled Republican villainy, fresh vitriol, and sundry vituperative vicissitudes, in short, hot air.  This much is to be expected.  Unbeknownst to Hollywood, it is not relevant except to Hollywood, and even there its virtue seems in retreat.

Where are the likes of Bob Dole and George Mitchell, successful former Senate Majority Leaders, who were also Minority Leaders, and respected each other?  Study their styles and you see sober decision-making, horse sense not horseplay, self-discipline not self-indulgence.  Yet today, their likes seem rare.

Last week, Schumer pitched gratuitous insults at his Republican Senate colleagues, calling them “delusional and paranoid” when they cited growing facts that support high-level bias and political malfeasance at the FBI.  He should be equally concerned about the facts and impartiality of the FBI and Department of Justice, but instead defaulted to emotional pandering.

Pelosi indulged her breezy belligerence, now a hallmark but not who Americans are, as she described President Trump’s proposal to legalize 1.8 children brought to the United States illegally in a swap for 25 billion dollars to build a credible border as “staggering cowardice” and “hateful,” even “a campaign to make America white again.”  Really?

Then, capping the week, for a perfect hat trick, Hillary Clinton stooped to a new low, a new appeal to sex-based disunity, shouting out her thanks to “activist b----es supporting b----es.”  If one may be so bold, that hardly seems the stuff of which unifying leadership is ever born.

So, there we are.  Or here we are.  We await the State of the Union, hoping for a speech that somehow unites.  Maybe the best quotes in that speech could be borrowed from the Bible or a past president, something about unity being essential for “one Nation under God.”

We are all Americans.  When we stop agitating, resisting, venting and lobbing mutual recriminations, we know the truth.  We are at our greatest when we are not divided but unified, not at odds, but sailing on an even keel.  When we resolve to work that way, by reason and fact, not emotion and detraction, we thrive.  That is just plain talk, the sort it would be good to hear in the State of the Union on Tuesday.