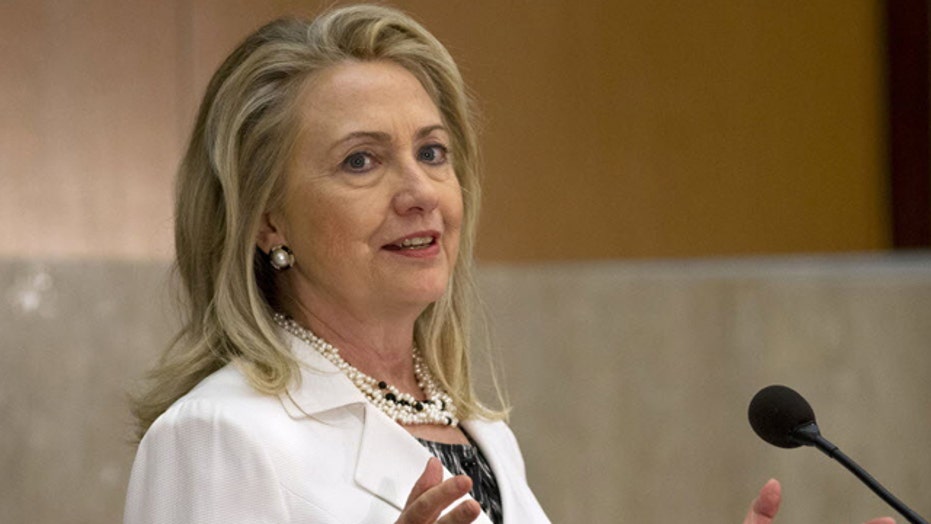 If, as The Washington Post recently reported, a new attempt by “marketing wizards” to “rebrand” Hillary Clinton is “focused on developing imaginative ways to let ‘Hillary be Hillary,’” then Mrs. Clinton and her presumed 2016 presidential campaign are in deep trouble.

That’s because when “Hillary is Hillary,” all kinds of contradictions and causes for mistrust arise.

When “Hillary is Hillary,” all kinds of contradictions and causes for mistrust arise.

The Washington Post wrote that, “Clinton’s words suggest that her 2016 campaign will stress economic fairness.” But consider Mrs. Clinton’s words, in a “thought leadership” lecture at UCLA. Mrs. Clinton said, “Businesses have taken advantage of unpaid internships to an extent that it is blocking the opportunities for young people to move on into paid employment.”

When “Hillary is Hillary,” all kinds of contradictions and causes for mistrust arise.

What the fawning mainstream media has missed is that the Clinton Global Initiative (part of the Bill, Hillary & Chelsea Clinton Foundation), in conducting its business, has taken advantage of unpaid interns, as the interns themselves testify.

Here are some of the comments from CGI interns from the website Glassdoor, which screens and then allows current and former employees to anonymously review their workplaces and managements.

“It is hypocritical that a non-profit that supports economic growth does not pay their interns and treat[s] them terribly.”

“No opportunities for advancement.”

To be fair -- which Mrs. Clinton isn’t, while she hypocritically condemns corporations for doing exactly what she or “Clinton Inc.” does—the unpaid intern comments about CGI include positive remarks, such as this:

“Since the opportunity is unpaid, they compensate by offering a ton of networking and professional development opportunities!”

Back when she was a U.S. senator, Mrs. Clinton not only joined many of her Democratic and Republican colleagues in using unpaid interns, but, as The Washington Free Beacon revealed, between 2002-2008 “women working for her in the U.S. Senate were paid 72 cents for each dollar paid to men.” Also, “During those years, the median annual salary for a woman working in Clinton’s office was $15,708.38 less than the median salary for a man.”

In fact, there are legitimate explanations for unpaid internships and for pay differences between men and women. The trade-offs for unpaid internships often include experience and networking opportunities. And, as many studies have shown, wage gaps between men and women are largely accounted for by factors such as women choosing to work fewer hours, time taken off to have children or care for them, differences in education, and willingness to work at risky or high-pressure jobs.

But you won’t hear Mrs. Clinton speaking about that. It would ruin her “unfairness” demagoguery. Meantime, speaking of unfairness and compensation, Mrs. Clinton and her “rebranders” are grappling with a rash of conflict of interest, cronyism and questionable use issues surrounding Mrs. Clinton and the Clinton Foundation.

As Fox News reported, “The Clinton Foundation was on the defensive…after disclosing that it had accepted millions of dollars from several foreign governments while Hillary Clinton was secretary of state, including one donation that violated the foundation's ethics agreement with the Obama administration.” And, as The Washington Examiner wrote, “The New York Times editorial board, which can hardly be described as right-leaning, wrote that the foundation needed to ‘reassure the public that the foundation will not become a vehicle for insiders’ favoritism, should [Hillary] run for and win the White House.’”

The New York Times has also written that Mrs. Clinton’s “advisers say she can be expected to weave gender into matters of economic fairness and opportunity.” This will come in different forms: pushing the “barrier breaking” narrative of electing her as the first American woman president, but softening her hard-edged image with “frequent references to being a mother and grandmother,” and “present[ing] herself as a sensitive candidate capable of nurturing the nation at a difficult time.”

The real test of Mrs. Clinton’s “rebranding” is a test of authenticity. After decades in the public spotlight, will the “new, improved, rebranded” Hillary Clinton seem authentic or will her repackaging be transparent as just her latest image reinvention in her quest for power? Will voters buy what The Washington Post headlined “The making of Hillary 5.0” as real or merely political role-playing that serves her ambition but does not serve the best interests of America?

Indeed, when a “truth and trust” test is applied to “the making of Hillary 5.0,” the most relevant question may be a variation on one Mrs. Clinton used in her testimony about Benghazi: “What difference, at this point, does it make?”

Communications consultant Jon Kraushar is at www.jonkraushar.net. He is a consultant to corporate and political leaders including Steve Forbes.