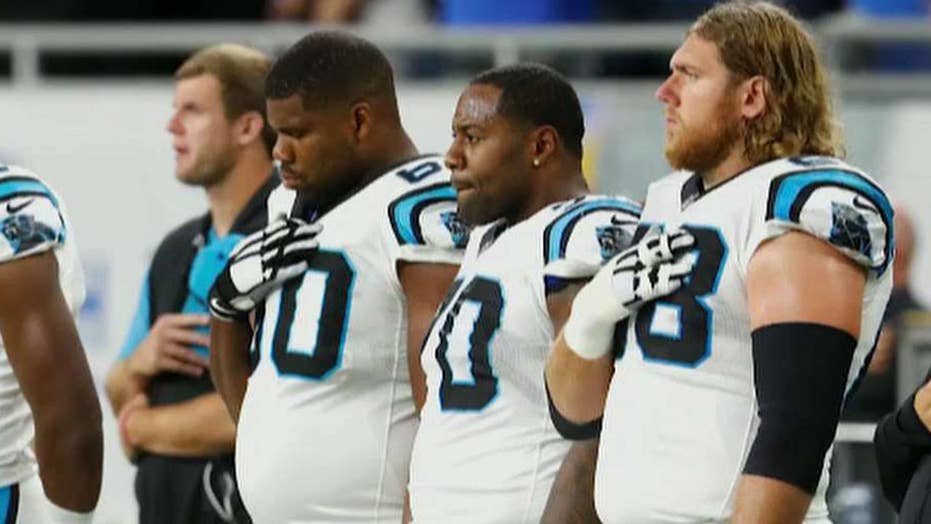 Double amputee veteran, Johnny Joey Jones, on the importance of standing for the national anthem.

The decision by NFL team owners this week to allow the league to levy fines on their teams when players kneel or otherwise act disrespectfully on the field during playing of “The Star-Spangled Banner” leaves me with mixed feelings, particularly as we approach Memorial Day.

As a soldier, I honor our flag and the national anthem as symbols of our great country. All members of our armed forces do. I serve in the Army now because, like others in the military today and in years past, I am a proud patriot. All of us now serving volunteered – and are willing to lay down our lives if need be – to express our love for America in actions as well as words.

I see kneeling during the playing of the national anthem as disrespectful to our country and especially disrespectful to those who made the ultimate sacrifice while serving in our military – the patriots we honor on Memorial Day.

At the same time, I acknowledge that protests have an important place in American history. As a black man I’m well aware that without civil rights protests, our country would look quite different today. I stand on the shoulders of civil rights activists and the abolitionists protesting slavery a century earlier. I would not be where I am without them.

If the new NFL policy required all players to stand on the field for the anthem I would oppose it. Patriotism should never be compulsory. But the NFL struck the right balance by allowing players to protest by staying in the locker room while the anthem is played. This lets them express their protest by their absence, without disrupting a moment of reverence for Americans who wish to honor our anthem and our flag.

At the same time, the NFL leaves is up to individual teams to decide if they want to discipline players who kneel or hold other on-field protests while the anthem is played. The league itself would only take money from the teams – in the form of fines – rather than penalize players directly.

Forcing players to participate in displays of patriotism against their will is wrong; putting reasonable parameters on protests is not. If you’re on the job and drawing a paycheck, an employer has a reasonable expectation that you will be working during your assigned hours.

If I go to the grocery store, I expect a clerk to ring up my purchase – not to stage a demonstration with my ramen noodles. If I board a plane I expect the pilot to fly, not to leave me sitting on the tarmac as she voices her political views. And in the same way, when millions of Americans tune in to a football game they expect to see … well … a football game.

Yet we still ought to be careful not to muffle free speech entirely. It would be unconstitutional for government to do this, and just plain wrong for corporations and other businesses to do it as well.

Companies like Google and Mozilla, which have fired employees for simply expressing political views different from those of the company, were wrong.

In this context, we ought to approach the NFL’s decision with caution. Instead of blindly cheering whenever “the other side” loses a battle to speak or protest freely, we ought to consider the long-term implications involved.

Make no mistake – businesses, nonprofits, colleges and other organizations across the United States are taking note. My fear is that some of them may distort the NFL decision to further justify the silencing of any dissent within their ranks – even in situations where an employee’s personal views have no impact on his or her ability to do the job and where the employee’s work is not disrupted.

To be sure, private companies have the right to make whatever rules they want, as long as they don’t violate any laws. But the NFL protests don’t revolve around a legal question. The issue is a cultural one.

Before patriotic Americans throw up “mission accomplished” banners in celebration of the new NFL policy designed to end the kneeling controversy, we ought to be clear in what we define as success.

Success isn’t when your personal views are represented at the expense of someone else’s. It’s when our country allows the free market of ideas to flow without a mob mentality meddling in its affairs.

As we remember and honor our fallen military service members on Memorial Day, let’s remember we should also honor the values they fought and died to defend, including the right to speak and protest whatever we perceive as unjust.