Trump accuses Google of highlighting negative stories on him

President Trump is speaking forcefully about fixing a growing problem affecting our national discourse. He says we may need to regulate the giant tech companies that control vast swaths of our information landscape, due to their bias.

The president tweeted this week: “Google search results for ‘Trump News’ shows only the viewing/reporting of Fake New Media. In other words, they have it RIGGED, for me & others, so that almost all stories & news is BAD. Fake CNN is prominent. Republican/Conservative & Fair Media is shut out. Illegal?”

Google, Facebook and Twitter all claim they do not purposely discriminate due to political viewpoints. But it is increasingly clear that this is the outcome – whatever their intentions. Twitter CEO Jack Dorsey admitted his firm suffers from left-leaning bias and must do more work to ensure it doesn’t affect Twitter.

The question then becomes, what can President Trump do to affect this? 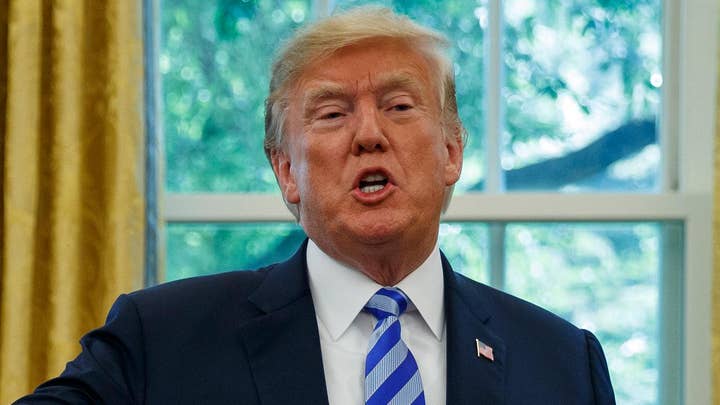 The first thing is exactly what the president has been doing – using the bully pulpit to influence the social media companies to change their behavior.

Government intervention should occur only as a last resort, because this would infringe on free speech and expression.

The social media firms need to take it upon themselves to solve the problems they have created, in many cases due to their own success.

Google, Facebook and Twitter dominate the online world in the same way that ABC, CBS and NBC dominated the world of television prior to cable TV. There are really no alternatives to these social media companies. That gives them great power, but also great responsibility. Thus far they have done better wielding the first than honoring the second.

Hopefully, the social media companies will heed the president’s warning, but if not, what can he do?

In this election season, the president could direct the Federal Election Commission to investigate the practices of the social media companies. The commission could examine whether suppressing conservative ideas – including in some cases the accounts of Republican candidates – constitutes an in-kind contribution to the Democratic Party and its candidates.

Security Studies Group submitted a complaint to the Federal Election Commission asking for this type of investigation into Twitter with a reference to the Fact Sheet on Viewpoint Discrimination we compiled.

Another avenue is to have the Federal Communications Commission look at the immunity granted to the social media companies as Internet service providers under section 230 of the Communications Decency Act.

This immunity for the companies exempts them from defamation lawsuits, because they are considered to be distributors of content rather than publishers that exert editorial control. It is reasonable to consider whether the amount of control these companies exert in deciding what content is available – or not available – changes this status.

Google, Facebook and Twitter are private companies. They have the right to have policies to promote liberal ideas and ban conservative ones from their platforms. But as publicly traded companies, they have a responsibility to speak honestly about their business practices. They can’t have their CEOs saying they do not discriminate if it can be shown they do.

President Trump could ask the Securities and Exchange Commission to examine whether the three companies are misleading their shareholders and the public.

There is also a question of whether the success of the social media companies has made them indispensable for businesses, organizations and many individuals. If so, there is the possibility that they could be declared to be public utilities and regulated that way to prevent discrimination.

This regulation has been imposed previously on electric power and telephone companies. If there is no alternative to their service and they are denying service to some businesses, organizations and individuals that is a legitimate government concern.

The goal here should not be to find ways for government to insert itself into the digital town square as some kind of referee. But right now, the public discourse is being limited and the social media companies are refusing to fairly serve some of their customers.

This refusal is dangerous, hindering the ability of people to be informed and act on the information they receive. Let’s hope the Silicon Valley crew decides to take action to make this right.