A miasma of defeat, desperation, and fear wafts over Washington officialdom in the aftermath of the Senate and House Judiciary hearings this week, with an undercurrent of leaked revelations of 2016 FBI spy operations abroad.

Attorney General William Barr’s testimony before the Senate Judiciary Committee on the Department of Justice’s investigation into Russian interference with the 2016 election, and his refusal to testify before House Judiciary Thursday, both revealed much about the new attorney general and the Democrats who sought to question him.

At their heart, clownish performances aside, the hearings confirmed what we already knew: President Trump was legitimately elected, despite President Obama’s knowledge of Russian interference attempts, and Democrats still can’t come to grips with this reality, two and a half years later.

ANDREW MCCARTHY: MUELLER'S LETTER TO BARR – A NEAT TRICK BY THE WASHINGTON POST BEFORE HEARINGS BEGIN

Democrats’ deep angst at the Mueller investigation’s failure to uncover their hoped-for evidence that the Trump campaign colluded with Russia manifested Wednesday with Democrats attacking Attorney General Barr’s character—even though that strategy failed spectacularly during his confirmation hearing—and his proper handling of the flawed Mueller report, with cringe-inducing defamation of President Trump thrown in.

Attorney General Barr was unflappable in the face of the Democrats’ strained questions, parrying their insinuations, baseless personal attacks, and unfounded allegations with careful reminders of the relevant law and established facts. Senator Mazie Hirono’s anti-Trump and anti-Barr rant was so extreme and devoid of any basis in reality that Chairman Lindsey Graham, R-S.C., chastised her for slandering Barr and threatened to shut down the hearing.

Senate Democrats flailed, trying desperately to characterize inadvisable actions as illegal and characterizing any actions by the president not to welcome the Mueller investigation with open arms as obstruction of justice.

Senator Harris’ questions, grandstanding for later-in-the-day fundraising efforts for her 2020 presidential campaign, seemed to imply that Robert Mueller’s work should have been double-checked by the attorney general personally, or that he should have personally reviewed all of the evidence of a two-year investigation before offering any comment on it, even though the full report itself has now been published, so that the public and even haughty U.S. Senators may read it for themselves!

At their heart, clownish performances aside, the hearings confirmed what we already knew: President Trump was legitimately elected, despite President Obama’s knowledge of Russian interference attempts, and Democrats still can’t come to grips with this reality, two and a half years later.

Democrats dwelt on Attorney General Barr’s March 24 letter to Congress regarding the Mueller Report, Why? Because a letter from Robert Mueller to Bill Barr written on March 27 was conveniently leaked to The Washington Post the night before, giving the Democrats a new source of breathless, baseless outrage.

As embarrassing for Democrats as the Senate hearing was Wednesday, Thursday’s debacle over on the House Judiciary side was downright humiliating. We saw a full-fledged circus with Congressman Steve Cohen, D-Tenn., gobbling down a bucket of fried chicken at 10 a.m. for the cameras as he gesticulated at an empty chair, claiming the Attorney General was “chicken” for not showing up.

In fact, it was House Judiciary Democrats who resembled flightless birds, as their vestigial legal skills have so atrophied through years of politics that none of them felt confident enough to ask questions of the attorney general themselves, insisting that their better-qualified staff do the work. The attorney general properly rejected this indignity and went about his business, refusing to take poultry-wielding poltroons seriously. 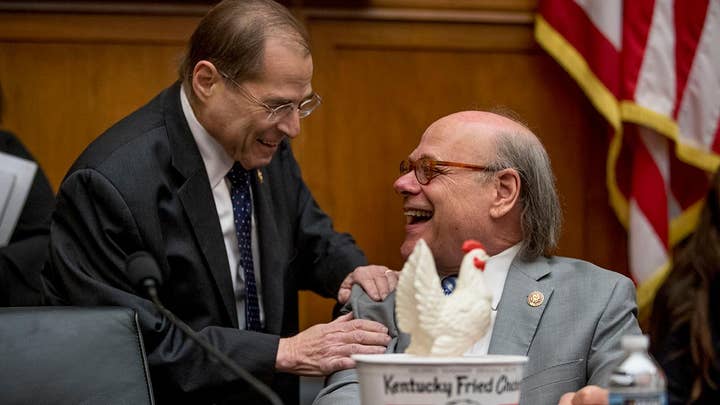 Outside the chamber, House Speaker Nancy Pelosi – who to date has been one of the more circumspect Democrats on the collusion/obstruction spectrum – abandoned rectitude and accused the attorney general of criminal perjury, implying that he could be prosecuted for his crime (by whom, Madame Speaker? He’s the attorney general … details, details --). And, as predictable as the chorus in a Greek tragedy, the chattering pundits and “news” anchors on major networks repeated these lies, slanders, and demagogic demands that the entirely honorable attorney general resign because he had lied, and that he must be hiding something because Robert Mueller’s merry band of partisans was unhappy that Barr’s cover letter was insufficiently damning to the president.

For the past two years, Democrats and their media allies have endlessly repeated a baseless collusion mantra in their attempt to disembowel the Trump presidency. As Utah Republican Senator Mike Lee said at the hearing: “What we have heard is as baseless as any conspiracy theory that we have seen in politics …The only difference here is that the purveyors of this conspiracy theory were, in many cases, prominent members of the opposition party.”

While petulant Democrats refuse to accept the conclusion of the investigation, Republicans on the Senate Judiciary Committee were asking hard questions: why was the lengthy investigation into the Trump campaign opened while the investigation into former Secretary of State Hillary Clinton’s mishandling of classified emails and documents was brief and shallow, and the Mueller investigation did not include the Steele dossier, Carter-Page FISA applications, or any of the damaging actions taken by the Obama-Biden Department of Justice to undermine the Trump campaign.

Democrats are so afraid of an attorney general – finally – manifestly willing to do his duty to expose the rot, corruption, mendacity, and betrayals in our law enforcement apparatus working hand in hand with political partisans in the media and in elected government, that they are taking ever-riskier gambles.

Speaking about the FBI investigators who openly criticized candidate Trump, Missouri Republican Senator Josh Hawley said that the “real crisis” is that an “unelected bureaucrat, who clearly has disdain for Trump voters” would try to overturn the results of a democratic election.

The smell of fear blanketing Washington Thursday further manifested in the New York Times story detailing shocking facts about the FBI’s use of spy “Azra Turk,” working with FBI asset Stefan Halper, to try to entice George Papadopoulos in September 2016.

The leaked information about this failed mission, one of several soon-to-emerge efforts to discredit the Trump campaign and presidency, plainly was leaked to the Times in an effort to pre-spin ugly facts expected to emerge in Justice Department Inspector Michael Horowitz’s report regarding irregularities in the FBI senior leadership’s attacks on candidate/President Trump, from defective FISA warrants to spying and bias and more.

The clues of official Washington’s fear of the coming exposure are manifold, ranging from flacks like Harvard Law Professor Laurence Tribe on Friday calling l’affaire Turk “entirely reasonable FBI counterintelligence precaution” (“spying,” in English) to media efforts to pre-smear the Inspector General as inexperienced or worse.

Democrats are so afraid of an attorney general – finally – manifestly willing to do his duty to expose the rot, corruption, mendacity, and betrayals in our law enforcement apparatus working hand in hand with political partisans in the media and in elected government, that they are taking ever-riskier gambles.

The increasingly strident tone emanating from the House; the use of media and academic cutouts and proxies to defame and attempt to bench honest investigators and lawmen; the demagogic insistence that the president is not just wrong on policy, but that those in his administration are a bunch of criminals, liars, even traitors.

Democrats’ attempts to undermine the president do not serve the country well.

Attorney General Barr said, “We have to stop using criminal justice processes as a political weapon.”

North Carolina Republican Senator Thom Tillis decried that the “new normal” seems to be that if there is no legal basis for indictment, Democrats go back and indict for political reasons and if Democrats are not able to do that, they attack the integrity of the messenger – Barr, Horowitz, anyone who contradicts the mantra.

These attacks on the rule of law itself are so hysterical that they threaten to drown out 2020 Democrats seeking to advance their far-left radical policy agendas. And the noise and drama threaten to turn off an electorate weary of this sordid episode in American history.