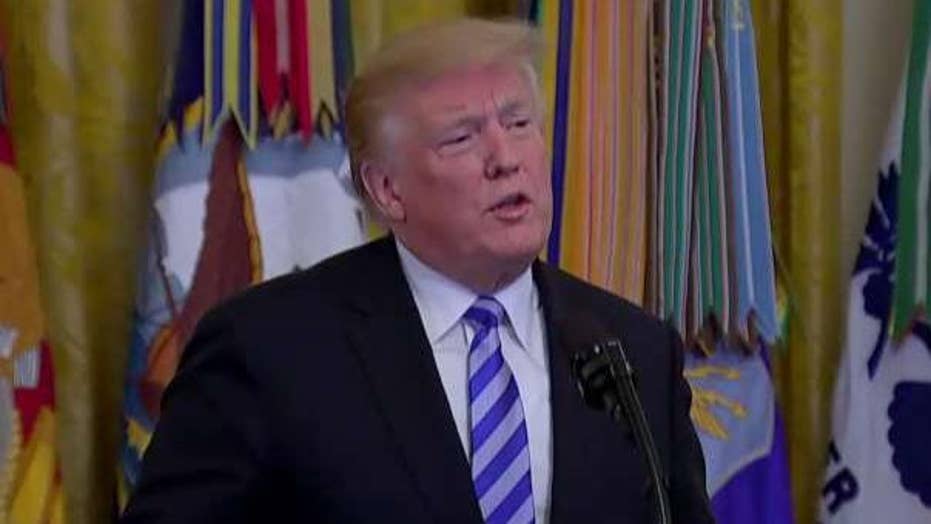 Trump commemorates the anniversary of the Beirut bombing

The president speaks at a White House reception honoring the 35th anniversary of an attack in Beirut, Lebanon, that took the lives of over 200 U.S. service members.

It has been over three decades since 241 American servicemen serving as Peacekeepers were killed and scores more wounded by a truck bombing in the Marine barracks in Beirut on Oct. 23, 1983. They deserve justice —  something the Justice Department and the Trump administration can help them finally achieve in litigation now being considered by the Supreme Court.

The right thing to do here — legally, morally, and from a foreign policy perspective — is for the American government and the Justice Department to support our troops and their families and not allow the Iranian government to escape the consequences of its vicious actions.

The complicity of the Iranian government in the Beirut bombing has been “long recognized,” said the Supreme Court in 2016 in Bank Markazi v. Peterson. (Bank Markazi is the state-owned central bank of Iran.) In fact, it was Iran’s involvement in that bombing that led to it being designated a state sponsor of terrorism by the State Department in 1984.

Led by Deborah Peterson, sister of the slain Lance Cpl. James C. Knipple, hundreds of family members and survivors have joined Peterson in pursuing the Iranian government in the courts. They won a judgment of $3.8 billion against Iran and have been trying to seize Iranian assets since Iran refuses to pay the judgment.

Currently pending before the Supreme Court are three petitions for certiorari filed by the Iranian government and by two banks, one Luxembourg and one Italian, asking the court to overturn a decision of the Second Circuit U.S. Court of Appeals against Iranian interests. The case involves $1.68 billion of Iranian funds being held in Luxembourg by Clearstream Banking that are owed to an Italian bank acting as a financial intermediary for Bank Markazi.

Clearstream maintained this Luxembourgian account for Iran with a correspondent account in New York invested in European bonds. Rather than transfer U.S. dollars earned in New York, Clearstream used credits and debits to attempt to evade anti-money laundering laws. Peterson and the other families sued in New York to force Clearstream to turn over the $1.68 billion in Luxembourg to satisfy the judgment they have against Iran.

While sovereign immunity is an important legal doctrine that protects governmental interests and international diplomacy, it should not be used to protect state sponsors of terrorism.

Foreign governments generally enjoy sovereign immunity under the Foreign Sovereign Immunities Act (FSIA), meaning that they are generally immune from lawsuits filed by private parties. However, there is a big exception written into the law at 28 U.S.C. §1605A for acts of terrorism committed by an “official, employee or agent” of a foreign government, which is why the Beirut families were able to obtain a judgment against Iran in the American courts.

Most importantly, the Second Circuit found that when a court has personal jurisdiction over a non-governmental entity such as Clearstream Banking, under applicable state law, it can “direct a non-sovereign in possession of a foreign sovereign’s extraterritorial assets to bring those assets to New York State.” The case was remanded to the district court to determine if, once the Luxembourg assets are transferred to New York, any of the exceptions in the FSIA would allow the money to then be turned over to Peterson and her fellow plaintiffs.

The Iranian government and its banks want the Supreme Court to overturn the appeals court decision and prevent the $1.68 billion from being used to compensate the victims of Iran’s 1983 terrorist attack.

The Supreme Court issued an order, as it often does in cases that raise foreign policy issues, asking the solicitor general of the Justice Department to file a brief presenting the government’s views on these petitions. That response has not yet been filed.

While this attempt by the Iranian government to keeps its assets out of the hands of the Marine Corp families has received little media coverage, it has gotten the attention of a bipartisan group of U.S. senators. Tom Cotton, R-Ark., and Sheldon Whitehouse, D-R.I., along with five other senators, sent a letter on April 24 to Attorney General William Barr and Solicitor General Noel Francisco urging them to “support the victims of Iranian terror attacks” in the Clearstream case.

As they point out, Congress “strongly supports the ability of terror victims and their families to recover on their judgments against Iran.” They ask Barr and Francisco to file a brief opposing the petitions for certiorari so that the families can enforce their judgments against Clearstream, which the senators say is “a financial institution that continues to launder money for the Iranian regime.”

The Trump administration and specifically the Justice Department should heed these calls and, through the brief it will be filing in the Supreme Court, support the families of the victims of the 1983 Beirut Marine Corps barracks terrorist bombing. While sovereign immunity is an important legal doctrine that protects governmental interests and international diplomacy, it should not be used to protect state sponsors of terrorism.

Moreover, the Second Circuit’s decision, in this case, is important to prevent outlaw regimes such as Iran from using financial intermediaries like Clearstream — which U.S. senators say is a money launderer — to get around sanctions imposed by our government and its allies.