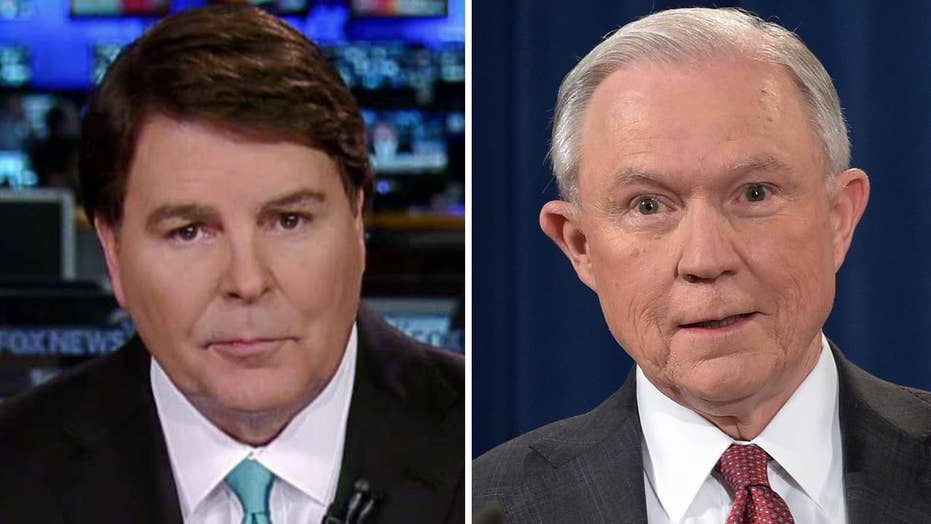 Napoleon Bonaparte once said, “from the sublime to the ridiculous is but a step.”

There is nothing sublime about Nancy Pelosi.  Ridiculous, however, is an apt description.

At a news conference Thursday, the former Speaker of the House denounced Attorney General Jeff Sessions as a liar, pronounced him guilty of perjury, and demanded his resignation.  This comes just days after she erroneously accused the Trump White House of obstructing justice.  Clearly, she’s on a tear.  Who knew the democratic leader, who is not a lawyer, was such an expert on the law?

What did Sessions do to deserve her condemnation?  By his account, he told the truth. When asked by Senator Al Franken during his confirmation hearing about “a continuing exchange of information during the campaign between Trump surrogates and intermediaries for the Russian government,” Sessions responded as follows:

“I’m not aware of any of those activities.  I have been called a surrogate at a time or two in that campaign and I did not have communications with Russians, and I’m unable to comment on it.”

In a subsequent questionnaire issued by Senator Patrick Leahy, Sessions answered “no” when asked the following:

“Several of the President-elect’s nominees or senior advisers have Russian ties.  Have you been in contact with anyone connected to any part of the Russian government about the 2016 election, either before or after Election Day?”

As posed, the questions specifically ask Sessions about any exchange of information with the Russians pertaining to the presidential campaign and any discussion of the election itself.  The attorney general insists he responded honestly.  That is, he never spoke with a Russian official about either subject.  In a statement, he said, “I never met with any Russian officials to discuss issues of the campaign.  I have no idea what this allegation is about.  It is false.”

Sessions says he had more than 25 conversations with foreign ambassadors in 2016 as a senior member of the Senate Armed Services Committee.  Twice he spoke with the Russian Ambassador Sergey Kisylak.

The first meeting occurred at a Heritage Foundation conference, co-sponsored by the U.S. Department of State, entitled “Global Partners in Diplomacy.”   Ambassadors were invited to converse with U.S. officials, including Sessions, about national security issues, trade and other foreign policy matters.  Sessions insists he talked with Kishlak only in his capacity as a Senator and never about the campaign or election.

He met with Kisylak two months later.  Again, he maintains their conversation had nothing to do with electoral politics and everything to do with carrying out the functions of his job as a U.S. Senator serving on the Armed Services Committee.

Someone might want to tell Pelosi that speaking with the Russian ambassador to the United States is neither exceptional nor incriminating. After all, Kisylak is stationed here.  His job is to communicate with U.S. officials.  Senators take meetings with foreign diplomats all the time.

Case in point: Democratic Senator Claire McCaskell.  After criticizing Sessions for meeting with the Russian ambassador and claiming she had never done so in her 10 years on the Armed Services Committee, it turns out that her own tweets betrayed her. The record shows she bragged on social media about two of her meetings with him.  Don’t be ashamed, Claire.  It is not a crime to speak to a Russian.

Importantly, there is no evidence to suggest that the attorney general has been untruthful.  The only dishonesty comes from Pelosi who has deliberately misrepresented the known facts and defamed Sessions by branding him a liar.

Pelosi is in desperate need of a primer on perjury.  As a non-lawyer, she might want to take careful notes.

Under federal law, 18 USC 1621, perjury is knowingly and willfully making a false statement under oath.  It is as simple as that.  You won’t run out of ink writing it down.  You don’t need to be a great thinker to comprehend the plain meaning of the statute.

If Sessions was acting in his capacity as a United State Senator and did not discuss the election campaign, then he did not commit perjury.  In other words, his statements to the Judiciary Committee were truthful, not lies as Pelosi claims.  Yet, armed with no evidence whatsoever, she has convicted Sessions without the benefit of a trial.  Her accusations are not just baseless, given the known facts, but contemptible.

Perhaps Nancy Pelosi is the one who should resign. For being irresponsible. For leveling reckless recriminations and slurs.

Her only defense may be incompetence.  It is the oft-used excuse of the Fool.