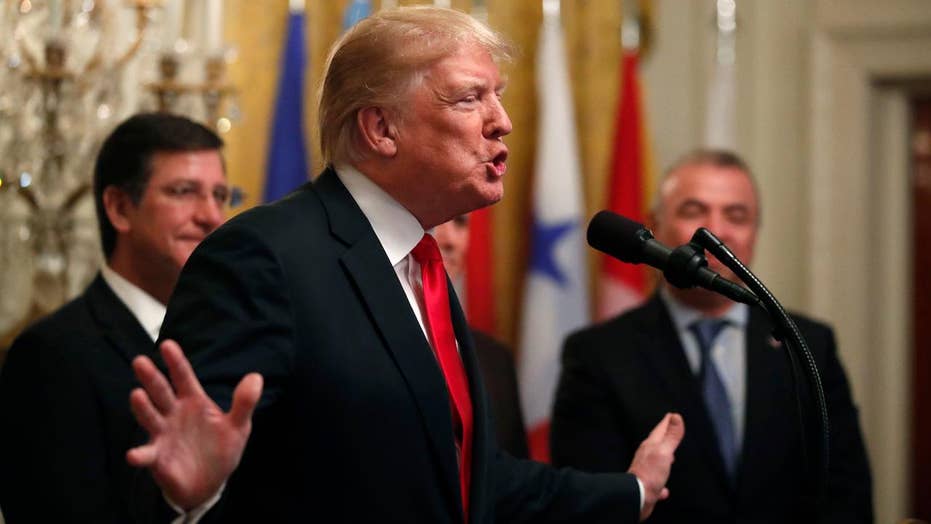 Who will be helped, hurt by declassification of Russia docs?

The 'Outnumbered' panel debates the impact of President Trump's order on the special counsel investigation.

President Trump has ordered that numerous documents involving the Russia investigation be declassified.  The records have long been sought by Congress under lawful subpoenas.  Yet, the FBI and Department of Justice have consistently obstructed the release of these materials under the guise of “classified” secrets.  This is a convenient alibi all too frequently employed to cover-up wrongdoing and abuse of authority by those we entrust to uphold the law.

These days, overzealous government officials automatically designate nearly all matters as national security risks, regardless of whether they truly are.

Whenever the FBI orders Chinese take-out, it is labeled “top secret” because… you know… it involves the Chinese.  False classification has reached absurd proportions.

How do we know?  Every time information is declassified we learn that the material should never have been classified to begin with.  It was nothing more than a subterfuge. Here are two recent examples:

In July, a substantial portion of the wiretap warrant applications presented to the Foreign Intelligence Surveillance Court was declassified.  It turns out that no vital sources or methods were revealed in a way that jeopardized either national security or the FBI’s secret investigative techniques.  Instead, we learned that much of the application to spy on a Trump campaign associate, Carter Page, was based on an unverified “dossier” that was funded by Hillary Clinton’s campaign and composed by a British spy, Christopher Steele, who was fired by the FBI for lying.

This critical information was never fully or candidly disclosed to the FISA judges.  They were deceived and defrauded.  Regulations clearly state, “only documented and verified information may be used to support FBI applications to the (FISA) court.”

In February, the Republican version of the House Intelligence Committee’s memo on the Russian investigation was also declassified. Once it was made public, we discovered that there was nothing therein that justified its suppression at the highest level of classification, “top secret.”  Indeed, it should never have been classified at all.

The FBI’s real objection was that it contained “material omissions” that made the bureau look bad.  That is not a legitimate reason for originating or maintaining classification status, as noted by Washington Post columnist and Fox News contributor Marc A. Thiessen in a recent column.  In fact, it is in direct violation of Executive Order 13526 that was signed by President Obama in 2009.  Hiding lawlessness or embarrassment by government officials under the contrived protection of a “classified” designation is against the law.

If the FBI, DOJ and others in the alphabet soup of government agencies had their way, none of their activities would ever be subject to scrutiny –even by members of Congress who have constitutional oversight responsibility.  Americans would be kept in the dark about how unelected officials are wielding their immense power in ways that are not always fair and judicious.  Sometimes, they are corrupt.

A sane, decent and civilized democracy must never operate completely in the furtive shadows of concealment by its own government.  The Constitution gives Congress the “implied powers” to hold executive branch officials accountable for their actions by lifting the veil of secrecy.  This is the only way to prevent malfeasance and deceit.

The Trump-Russian investigation is a case study in how personal and political bias motivated top officials at the FBI and Justice Department to misuse their authority to target Trump and to spy on his campaign in defiance of the rule of law.

As I explain in my book, “The Russia Hoax,” James Comey’s FBI violated department guidelines in launching its investigation in July 2016.  There was never “an articulable factual basis for the investigation,” as regulations demand.  There was no probable cause, no credible evidence of crimes, and no plausible intelligence to justify a counterintelligence probe. Facts were invented or exaggerated based almost entirely on a fabricated “dossier.”

Nine months later, the FBI still had no evidence of “collusion” between Trump and Russia, according to a transcript of FBI lawyer Lisa Page’s recent closed-door deposition before Congress.  This is corroborated by text messages she exchanged with her paramour, Peter Strzok, who served as the FBI’s lead investigator. Nevertheless, Robert Mueller was named special counsel despite a dearth of evidence.

Under federal regulations governing his appointment, evidence of a suspected crime is a necessary predicate.  It never happened.  Instead, Mueller was granted broad authority to investigate matters that are not necessarily criminal at all.  A special counsel is not authorized to search for a crime; there must be evidence of a crime first. This did not exist, rendering Mueller’s appointment illegitimate and invalid.  The authorization order itself was defective inasmuch as it did not set forth the required “specific factual statement” of a defined crime.

Despite their own admission that “collusion” was an unproven fiction, Strzok and Page traded text messages bragging about their “media leak strategy” with the DOJ designed to plant stories with reporters to damage Trump.

They even congratulated themselves on their success:  “The article is out!  Well done, Page.”

Leaking classified information to the media is a crime. This is some of the most incriminating evidence yet that Obama’s Justice Department and Comey’s FBI were engaged in a deliberate scheme to use their government positions for illicit and illegal purposes to frame Trump.

All of this seems to be lost on Rep. Adam Schiff, D-Calif., the ranking minority member of the House Intelligence Committee, who has repeatedly championed the “collusion” canard.  Schiff claims that the current FBI Director, Robert Wray, and Deputy Attorney General, Rod Rosenstein, have proclaimed that the president’s declassification order “crossed a red line.”

While Schiff is notorious for hyperbole, his assertion of a “red line” is rather stunning.  Does it mean Rosenstein and Wray will defy the president’s direct order and continue to obstruct lawful subpoenas issued by congress?  If so, they should be fired for rank insubordination.

In the alternative, they may endeavor to delay or “slow roll” the release of documents hoping that the political winds may shift or that control of Congress itself will change hands in the upcoming election.

Rosenstein has every reason to suppress the records. They may incriminate him. He affixed his signature to the final renewal of the FISA warrant application to continue spying on Carter Page.  He vouched for the authenticity and veracity of the information contained therein.  But if it was largely based on a “dossier” that was unverified and uncorroborated, Rosenstein may have been complicit in misusing his position of power in pursuit of a president who was wrongfully targeted by the FBI and DOJ.

Either way, the future does not bode well for Rod Rosenstein.  He appointed a special counsel without proper authority.

He then refused to recuse himself as a key witness in the very case he oversees.

All along the way, he has been obstructing Congress by withholding records they are entitled to have.

He surely knows what the declassified documents portend for himself.