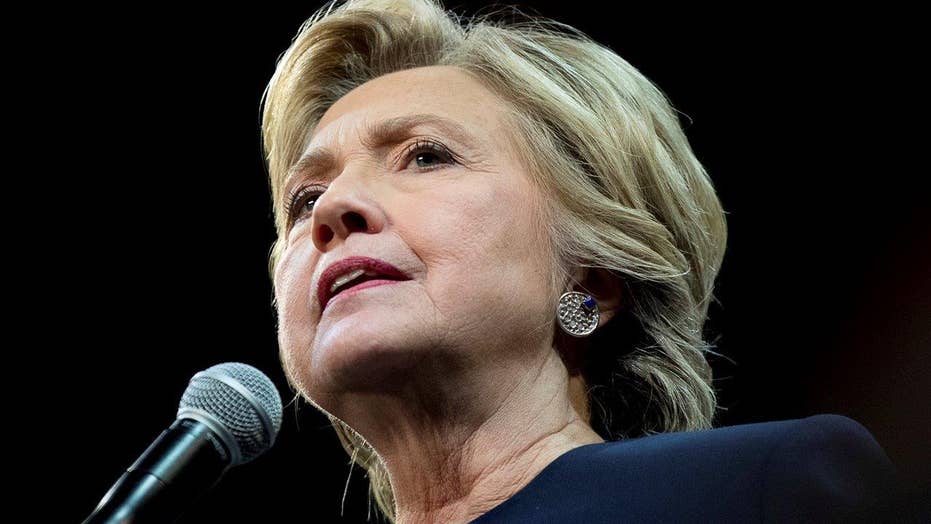 Gregg Jarrett breaks it down

The cacophony of noise engulfing Donald Trump’s groping scandal is so deafening it has drowned out the kind of outrage that might otherwise have proved fatal to Hillary Clinton in a normal presidential campaign.

But there is nothing normal about this campaign season. Regrettably.

Think what you may about Julian Assange (hiding out from sex crime charges) and WikiLeaks (a group devoted to thievery), but the documents they have hacked and “dumped” tend to show Hillary Clinton as ethically challenged, if not corrupt.  Both her campaign and her foundation seem to know it, but could care less.

Documents revealed in just the last couple of days prove the case of unconscionable foreign influence that should be against the law, but is not.

The Clinton campaign’s coffers have been filled with bags of money from agents working for foreign governments.  Nefarious and criminal, right?  Wrong.  It’s actually legal.

While it is against the law for a foreign government to give money to any U.S. political campaign, it is not illegal for an American lobbyist who is registered as a foreign agent representing another government to make the donation.  It’s a legal loophole so absurdly big an elephant could walk through it.  Or a donkey, depending upon your political persuasion.

In other words, a foreign leader could funnel money to an American agent who then shuffles the money to a U.S. presidential candidate in an effort to influence or manipulate the outcome of an election.  It is exactly what the law is supposed to prevent, but the geniuses in Washington who crafted the statute managed to ignore the obvious subterfuge.

The hacked WikiLeaks emails show that Clinton’s top aides were more than eager to exploit the stratagem. They didn’t seem to care that it might look sleazy, if discovered. Clinton communications director Jennifer Palmieri, allegedly wrote, “Take the money!” Campaign manager, Robby Mook’s response, “I’m okay taking the money and dealing with any attacks.”

Like the demanding football player in the film “Jerry Maguire,” the Clinton team appears addicted to the phrase, “Show me the money!” Their greed and zeal obscure any semblance of judgment and common sense.

Think about it.  Clinton came into the campaign already accused of being ethically challenged. Big time. But her campaign manager is perfectly willing to generate even more allegations of unethical behavior as long as it is not, technically, illegal.  Forget about the appearance of impropriety.  The almighty campaign dollar supersedes honesty and integrity.

Get the picture? These are the people who will likely surround Hillary Clinton in the Oval Office should she be elected president. Comforting, isn’t it?

The Clinton Foundation received millions of dollars from foreign governments while she was Secretary of State. Of course, she has denied conferring any favors to these foreign donors in exchange for their big bucks.

But newly released WikiLeaks documents show that those donors may have expected something in return from Clinton –a quid pro quo from the nation’s chief diplomat.  For example, before Qatar handed over a $1 million check to the Clinton Foundation, its representatives wanted a meeting with Bill Clinton.  For what purpose, we don’t know.  But an attempt to influence official actions by his wife, as Secretary of State, cannot be ruled out.

This is exactly the kind of corrupt practices, suspected or otherwise, that Clinton promised would not happen when she signed an ethics agreement with the Obama administration to limit certain foreign donations before taking the job in 2009.

Documents suggest she never abided fully with the agreement, nor the transparency and accountability she promised.

Hacked emails show Clinton’s supporters and aides were worried that all these foreign donations would evolve into scandal.

In a moment of uncommon candor and criticism, one wrote that Clinton had a “money problem” and seemed oblivious to the political peril.

In his email to campaign chairman John Podesta, the left-leaning columnist, Brent Budowsky, predicted that Clinton could become entangled in “a long-term perjury trap and endless cycles of news stories.”

While Budowsky may have been prescient about Clinton, he was myopic in his vision of Trump.  He did not foresee an implosion of the GOP nominee that would dominate the pre-election news cycle to the near exclusion of a lesser scandal.  And so it goes.

The corrupting influence of foreign donations pales in comparison to the callous and asinine attitudes of those who surround the Democratic nominee and who may well accompany her to the White House next January.

Among the latest WikiLeaks “dump” are documents showing the Clinton campaign was disappointed that the San Bernardino shooter was Muslim, not white.

Assuming the communications are authentic, this is particularly embarrassing for Podesta.  Right after the ISIS-inspired attack, the campaign chairman groused that terrorist Syed Farook had an Arab name.  In other words, he would have preferred a more mainstream, white name.  Spokeswoman Karen Finney, who appears to share this churlish sentiment, replied “Damned.”

Such comments are insensitive and boorish, to say the least.  Perhaps they speak volumes about the people who surround Hillary Clinton.  They seem to care less about the tragic shooting and the 14 precious lives that were taken… and more about how the “politics” of the massacre might negatively impact Clinton’s chances of becoming president.

Benjamin Disraeli, who twice served as Great Britain’s Prime Minister once wrote, “All power is a trust.  We are accountable for its exercise.  From the people, and for the people, all springs, and all must exist.”

Trust seems to be a word that is alien to Hillary Clinton. To that end, I’d be happy to lend her my copy of Disraeli prose.

I fear she needs it more than I do.