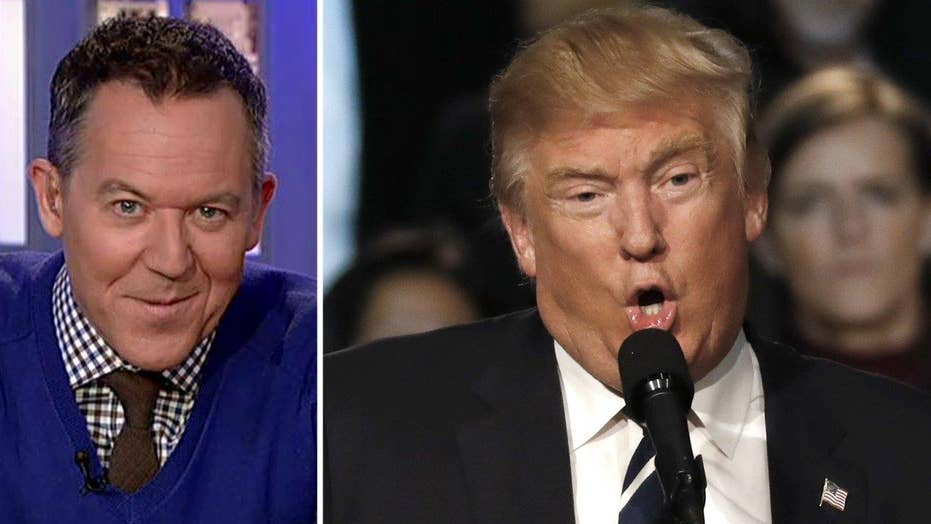 Gutfeld: Who do we owe Trump's win to?

After doing “The Five” on Election Night, I headed to a bar across the street for something to eat. The doorman, a tall Jamaican wearing a suit,  recognized me and launched into a determined, passionate defense of Donald Trump.

He swore Trump would triumph. If he lost, this smart, charming dude said, it would send the worst message to the world — that America was no longer governed by honorable people.

He looked brokenhearted when I told him that early returns were suggesting a Hillary win. I went inside and ate some overpriced lettuce wraps, then I checked my phone and saw the direction of the election beginning to turn.

I went outside and showed the doorman this weird little gauge the New York Times was using to assess the odds of winning. It still had Hillary projected to win, but it looked less certain with every passing minute. It went from 90 percent to 60 percent and it kept dropping, like an ACME safe on Wile E. Coyote's head.

While we were talking, two British tourists — pale and older-middle aged, but dressed like they were backpackers in their 20s — approached us.

"Who's winning?" the bearded husband asked. I looked at the gauge on my phone and said, "Looks like Hillary ... for now."

Their immediate reaction was to shout "Thank God!" and "Yes!" to each other, while thrusting their fists triumphantly into the air as if they had just won a hundred bucks on a blackjack hand. It was an ostentatious display meant for our approval — an appeasement signal tourists do in order to appear that they are following the customs of the land. It's likely an evolutionary thing so the natives won't eat you, but it came off as fake and insulting.

It was insulting because they assumed everyone felt as they did. It's the same attitude you find in publishing companies, yoga and spin classes and school campuses — where you can be obnoxious about your leftism, because you assume everyone thinks the same way you do.

But … how many didn't think like that and just bit their tongues this year?

When the doorman did not nod in approval, the tourists went from confused to awkward. They had expected high fives and welcoming smiles. Sensing cold shoulders, they meandered toward the lights and commotion of Time Square, and inevitably to the shock of their post-Brexit lives.

They were a microcosm of the media academic complex.

In the next hour the results really shifted. The New York Times gauge showed a Trump victory at 90 percent certainty. I went out to the doorman and said, "Jesus, I think Trump is pulling it off," and he was ecstatic.

That night, a half dozen of my friends and family who were always certain of Trump's coming victory contacted me. Terry Schappert, a retired Green Beret, texted me a simple, "See?" My sister’s liberal friends raged on Facebook, some angrily spitting out blame at others for not supporting Hillary. I imagine that if Hillary had won, they would not have accepted that kind of petulance from anyone who had been rooting for Trump.

Remember, it was the media who expected Trump voters to riot after the inevitable loss. The deplorables were already condemned for a crime not committed! But when activists broke windows in places that supported Clinton, the really crappy behavior came from the party of the "greater good."

The media, the campuses, the celebrities all reacted as though an asteroid had hit — but it took out only their favorite cafes, movie houses and organic groceries, leaving the pickup trucks, country music and hayseed hicks unscathed. Suddenly, their America died, replaced by “Deliverance.” The hysteria was just that — overblown, unnecessary and unhealthy.

For people who always worry "about the children," they were doing their absolute best to scare the crap out of them — with their ominous, hollow-eyed moaning. They might as well tell their kids that a zombie virus infected half the country (isn't that how they really felt anyway?).

The bottom line: All of those upset people were living in a fog of ignorance. Few of them knew a Trump supporter, and those who did dismissed them as jokes. I lived among a pretty even mix: one-third Trump, one-third Not Trump, one third Hillary. Then, over time, that first third started chipping away at the other two.

This comical hysteria reminds me of 1980, and how easily manipulated I was when I was 16. After the election, everyone in the media was frantic that Ronald Reagan — a Satan/Hitler hybrid bent on destroying the world — had won. The media scared the hell out of people.

Life magically went on, and the planet powered through the 1980s as if it woke from some sleep paralysis that was called the 1970s.

I am pretty sure that’s why this meltdown bodes well for America. The protests and media crackup — it's like a child crying after a flu shot.

Speaking of … So many media hand-wringers are writing "What do we tell the children?" articles about Trump's win. I'd tell my kid: "Imagine you went to a toy store to buy a squirt gun, and you came out with a bazooka. Hillary was the squirt gun; Trump was the bazooka."

The most encouraging sign: Left-wing icon Noam Chomsky saying the Republican Party is the most dangerous organization on earth. Why is this encouraging? Because everything Chomsky deems evil usually turns out the opposite. If he ever had a kind word for America, I must have missed it.

The celebrity reactions kill me. Yoko Ono recorded herself screaming after Trump won. But that is at least a more considered and cogent response than we're getting from Paul Krugman and some of these other socialist toolbags. Every day I watch the reactions, I say to myself: "This is a good thing."

I know that could change — and I still abhor the sycophants and opportunists — but the sanctimony among the pained faces is as thick as pea soup. Among the celebrity masses, there is absolutely no recognition at all of even the basic fact that there are families all across the Midwest who have not heard anyone in Washington speak to their desperation.

That is not racism or sexism. That's survival.

A lot of dragons were slain on Tuesday. One was fear. When I was at Hofstra for the first presidential debate, I saw college kids demonstrating who weren't liberal. That was new. If you weren't a leftist on campus, you kept your head down and your mouth shut. No more.

My stance during the election has been the same. Electrified by Trump's candidacy, I was steadfast in providing guardrails of criticism. I would not be a cheerleader for anyone. I wanted to win — but more importantly, I did not want to see issues I care about get soiled by the careless handling of neophytes. I'm for a strong border (I pushed for the wall on “The Five” years ago) but sloppy rhetoric gave Trump's adversaries the edge — which bummed me out. I've raised money for wounded warriors and have been a defender of our nation's veterans, so sloppy rhetoric about POWs bugs me.

You see my point? One way to be persuadable on an issue you care about is to establish a fence around it — and demand that those who enter be damn good on the subject. Because when you screw up, you screw it up for us, too.

Lastly, to my liberal friends: Here's an analogy to offer perspective. Think of the American people as children in a divorce. They spend eight years or so with mommy, then eight years or so with daddy. And for some reason, most of America is fine with it. Eight years with Clinton, eight with Bush, eight with Obama and now you get Trump. It's a custody battle, and the children control the outcome. Mommy are the Dems, Daddy – that’s the Republicans.

So, liberals … It's not the end of the world. It's just America getting tired of you. In eight years, it’ll get tired of the Republicans, too.