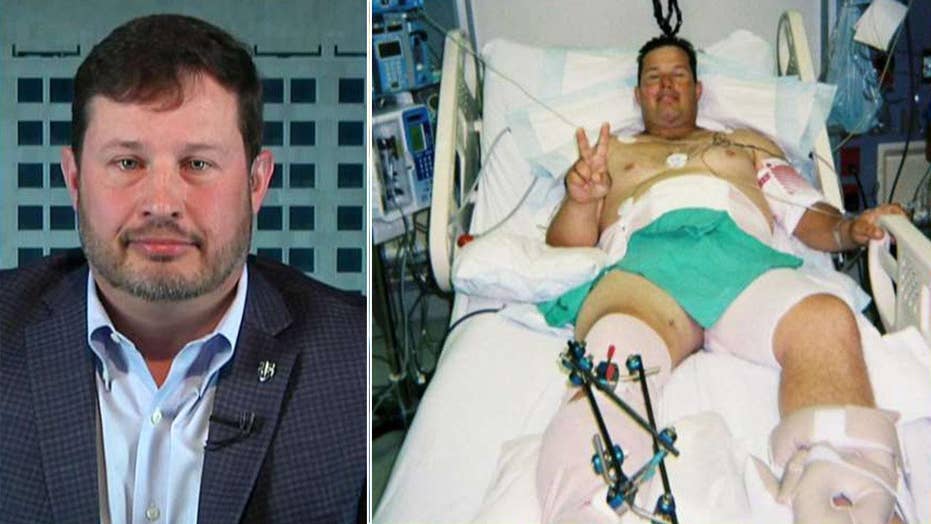 Retired Green Beret: I am a warrior, not a victim

SFC Greg Stube warns people not to fall to the left's identity politics and opens up about how to 'conquer anything.'

You think about a lot of things when you’re in a hospital bed with tubes in you and pieces of your body sewn back on, all the while knowing you really should be dead. At first, how you judge yourself is the worst of it.

I had been a Green Beret for 18 years. I was physically tough and had all these skills earned in sweat and blood. But after being blown up, shot and badly burned on a battlefield in Afghanistan, I found I’d only worked to harden the parts that had been blown up and burned away.

I found that everything I needed to really be strong was undeveloped and little understood, and that mainstream society, and even the Army, didn’t grasp this.

I was aware that other soldiers in the hospital with me had taken their own lives. I knew others who’d gotten out with missing limbs and PTSD who’d turned to alcohol and drugs.

I was a warrior, which meant I always trained for external threats. Now I had to look inward to avoid these traps.

We shouldn’t allow ourselves to be deceived by the Left’s identity politics. The Left too often insists we behave as victims of the powerful, of our physical limitations and more. We must instead define ourselves by what’s inside of us. From that basis we can conquer anything.

After a year in the hospital recovering, and after years of telling my story and giving my hard-earned perspective to audiences first as the official spokesperson for the Green Berets, the first they ever had, and then later as a retired soldier, I came to understand what had to be said. It was then that I sat down to write Conquer Anything—A Green Beret’s Guide to Building Your A-Team.

A first clue had come when my father, a career soldier who also had to overcome horrible wounds, visited me in the hospital and told me, “Son, remember when I told you that if you want sympathy you’ll find it in the dictionary between ‘sh%@ and syphilis?’”

I nodded and tried to smile.

“Here’s something else,” said my father. “I need you to know now that sympathy may pay well in the short term, but if you cash in on sympathy it will take everything from you in the long run.”

This led me to the realization that it’s a mistake to define a soldier wounded in war as a “wounded warrior.” Doing that defines them by their wounds and makes them look for sympathy. They begin to think of themselves as victims. If you volunteer you can’t be a victim. The way to recover, I found, is to define yourself not by your body, but by your soul.

Defining yourself according to perceived limitations, after all, is to concede defeat before you even begin. Nevertheless, that is what popular culture so often does. And not just for “wounded warriors,” but for anyone with an addiction to overcome, an illness to beat or any other perceived physical or psychological limitation.

Next, I found, comes taking the positive steps I learned in the Green Berets, the methodology I taught when I was an instructor at the U.S. Army John F. Kennedy Special Warfare Center and School.

Special Forces’ teams have a mystique about them, as they work expertly to execute complex and deadly missions, often behind enemy lines. What I learned in my recovery, however, is that the system they’ve developed can help all of us build our own A-Teams to conquer anything.

Doing so means first defining ourselves by what’s inside of us. Next are the steps to lead. This begins with defining the mission, understanding our code and then recruiting a team and understanding how a diverse team becomes one. It begins from inside and then moves out, but we must stay true to who we are.

We are all individuals. We shouldn’t allow ourselves to be deceived by the left’s identity politics. The left too often insists we behave as victims of the powerful, of our physical limitations and more. We must instead define ourselves by what’s inside of us. At the same time, we must respect others as individuals, all with human dignity.

From that basis we can conquer anything.

Sgt. 1st Class Gregory A. Stube (ret.) is from Covington, Tennessee. He joined the Army in 1988 as an infantryman and spent 19 of his 23 years in service as a Green Beret on the Special Forces’ A-Teams. He was seriously wounded during Operation Medusa in Afghanistan in September 2006 and spent a year in a hospital recovering from his wounds. He went on to serve as the first spokesperson for the Green Berets. Today he is a well-known public speaker with a focus on leadership, character development and helping other veterans succeed in civilian life. His awards include the Bronze Star, Purple Heart and multiple Army Commendation Medals.