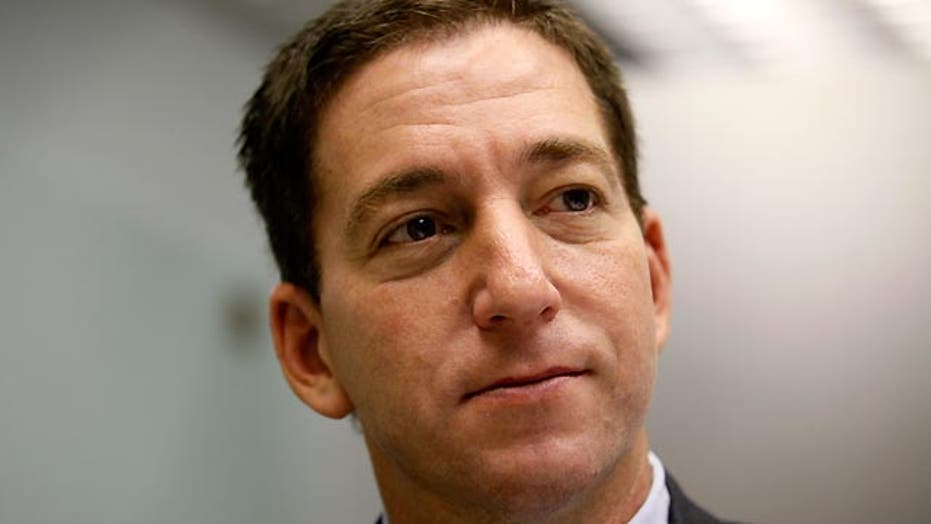 Glenn Greenwald to publish names of people targeted by NSA

With heart-pounding suspense, John le Carre-like intrigue and Jeffersonian fidelity to the principles of human freedom, Glenn Greenwald's “No Place to Hide” has just been published.

The book, which reads like a thriller, is Greenwald’s story of his nonstop two weeks of work in May and June of 2013 in Hong Kong with former CIA agent and NSA contractor-turned-whistleblower Edward Snowden. Greenwald was the point person who coordinated the public release of the 1.7 million pages of NSA documents that Snowden took with him in order to prove definitively that the federal government is spying on all of us all the time.

The revelations constituted for Greenwald the scoop of the century; for Snowden, the exposure of massive government violations of basic constitutional principles by his former bosses; for the NSA and the Bush and Obama administrations, the revelation of criminal wrongdoing orchestrated by two presidents themselves; and for the American public, a painful realization that the Constitution is only as valuable a restraint on the government as is the fidelity to uphold it of those in whose hands we have reposed it for safekeeping. As Greenwald makes clear, it is not in good hands.

“No Place to Hide” not only tells of Snowden’s initially frustrating and anonymous efforts to reach out to Greenwald and the others; it not only carefully explains the insatiable appetite of the NSA to learn everything about everyone (“Collect it all” was a continuously posted NSA motto); it is also a morality tale about the personal courage required of Snowden and Greenwald and his colleagues to expose government wrongdoing and the risk to their lives, liberties and properties in doing so.

In the midst of one of their endless Hong Kong hotel meetings, Snowden told the journalists that the local CIA station employed agents trained to kill; and it was just a few blocks away.

Then The Guardian’s lawyers informed Greenwald that the Bush and Obama administrations had not hesitated to use the Espionage Act of 1917 -- a World War I-era relic, still on the books, employed to chill, stifle, suppress and ultimately punish free speech -- to attempt to lock up journalists even when they revealed the truth. At this point in my reading the book on Memorial Day, I noticed that my pulse was racing, even though I obviously knew the outcome.

The road to the outcome began about a year ago when Greenwald received email messages from an anonymous yet persistent and intellectually intriguing source. The source demonstrated such a superb command of the Internet, such a patient understanding of Greenwald’s need for a basic education in the craft of digital spying, such a Jeffersonian understanding of the constitutional role of government in our lives, and so enticed Greenwald and his editors at The Guardian that, sight unseen, they traveled to Hong Kong to see whether the source possessed the documentary evidence he claimed to have of the most massive and sophisticated American government spying upon innocents in our history. He did.

Greenwald skillfully uses NSA documents to demonstrate that the highest government officials to discuss this spying in public -- President Bush, President Obama, Bush Attorney General Alberto Gonzales, Director of National Intelligence James Clapper, former NSA boss Gen. Keith Alexander -- all lied to the American public, (in the case of Clapper and Alexander, they probably did so criminally, as they were testifying to Congress), and they engaged in a conspiracy to violate the constitutionally protected rights to privacy of every American. After initially denying all this, then disparaging Snowden, then questioning his loyalty, then questioning his sanity, the government reluctantly admitted to all that Snowden revealed. How could it not? Snowden’s revelations consist entirely of the NSA’s own documents, many of which are reproduced in Greenwald’s book.

The government has argued that when it engages in all this spying, it is looking for a needle in a haystack. It claims it can only keep us safe if it knows all and sees all. Yet, such an argument cannot be made with intellectual honesty by anyone who has sworn to uphold the Constitution.

The Constitution presupposes the existence of natural rights and areas of human endeavor that are insulated from government knowledge and immune to government regulation, except in the most carefully prescribed circumstances. Those circumstances require that probable cause of crime be possessed by the government about identifiable persons and demonstrated to a neutral judge before the government may engage in any surveillance of that person -- and all those NSA conspirators and all their judicial facilitators know this.

And what has Congress done in response to all this indiscriminate spying -- spying that we now know is done upon members of Congress themselves? The Senate has done nothing, yet. The House passed legislation last week called the USA Freedom Act. This deceptively entitled nonsense so muddies the legal waters with ambiguous language that if enacted into law, the bill actually would strengthen the ability of the NSA to spy on all of us all the time. Is it any surprise that Obama and the NSA leadership support these so-called reforms?

The duty of government is to keep us free and to keep our freedoms safe. If it fails to protect freedom, it should be replaced. If it continues to spy on all of us all the time, then Greenwald’s title -- taken from a warning issued by the late Sen. Frank Church in the pre-Internet era -- will have come to pass. We will have no place to hide and no freedoms left to exercise without the government’s approval.