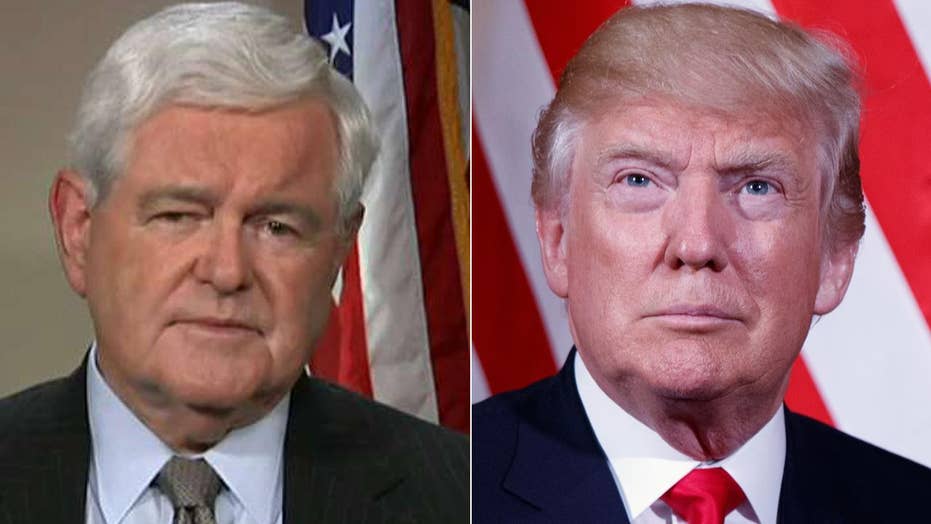 Newt Gingrich on messages of faith in Trump's Poland speech

Charles Krauthammer was absolutely right last week on Tucker Carlson Tonight when he said President Trump’s speech in Warsaw, Poland, on July 6 was one of the president’s best.

However, despite all of this, I was left puzzled by Charles’s assertion that the President’s words were “the antithesis of his inaugural address,” wherein Charles incorrectly claimed that President Trump had equated our allies to parasites.

Take, for example, these lines from the inaugural address:

“We will seek friendship and goodwill with the nations of the world – but we do so with the understanding that it is the right of all nations to put their own interests first.

“We do not seek to impose our way of life on anyone, but rather to let it shine as an example for everyone to follow.

“We will reinforce old alliances and form new ones – and unite the civilized world against Radical Islamic Terrorism, which we will eradicate completely from the face of the Earth.”

These are not the words of an isolationist who views our long-time allies as parasites and wants America to go it alone. These are the words of a leader resetting, renewing, and reaffirming America’s role in the world.

The same values and principles expressed by President Trump in January were once again reflected during his remarks in Warsaw, in which he said, “Americans know that a strong alliance of free, sovereign, and independent nations is the best defense for our freedoms and for our interests.”

In fact, President Trump’s Warsaw speech was consistent with his other major foreign policy speeches since taking office – his first address to the Joint Session of Congress in February and his speech at the Arab Islamic American Summit in Riyadh, Saudi Arabia in May.

During his first address to the Joint Session of Congress, he said, “our foreign policy calls for a direct, robust, and meaningful engagement with the world. It is American leadership based on vital security interests that we share with our allies all across the globe.”

In this speech to Congress, which he made after his first month in office, President Trump said, “we strongly support NATO, an alliance forged through the bonds of two world wars that dethroned fascism, and a Cold War, and defeated communism.”

During his speech in Riyadh, Saudi Arabia – which was an unprecedented, historic meeting between an American president and more than 50 leaders of Muslim-majority nations – the president actually referred back to his inaugural pledge “to strengthen America’s oldest friendships, and to build new partnerships in pursuit of peace.”

He said, “our goal is a coalition of nations who share the aim of stamping out extremism and providing our children a hopeful future that does honor to God. … To the leaders and citizens of every country assembled here today, I want you to know that the United States is eager to form closer bonds of friendship, security, culture, and commerce.”

Looking at all four speeches, the president’s foreign policy message – and actions – have been entirely consistent. President Trump has never ceased to promote American leadership, peace, and security through strong alliances – while also promoting the right of each nation to pursue its own path to prosperity.

As I discuss in my new #1 New York Times best-selling book, Understanding Trump, the key to promoting safety abroad is rebuilding bridges with our traditional allies and showing great strength to those who may be our enemies.

This is exactly what President Trump is doing.