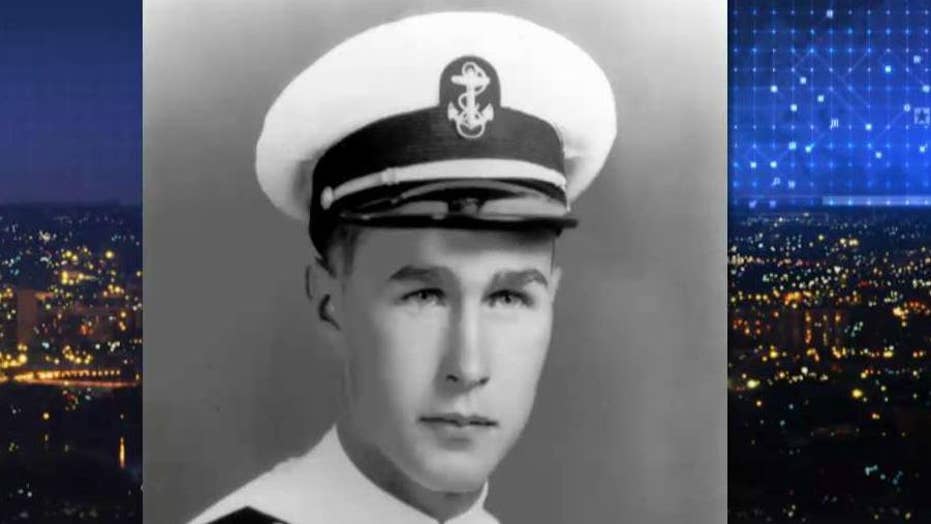 Former President George H.W. Bush dies at the age of 94, about eight months after the death of his wife, Barbara Bush.

In 2017, Sen. John McCain, R-Ariz., received the Liberty Medal for a lifetime of sacrifice and service to our nation. He used the event to praise another war hero and Liberty Medal recipient, now also gone, who had spoken on the half-century anniversary of a date that changed the nation – December 7, 1941.

McCain mused how Bush, “his voice thick with emotion,” recalled not just lives lost that day but also “friends he had served with and lost as the Navy’s youngest aviator.”

McCain was correct. I was assigned to write Bush’s speech for the 1991 event that fused the personal and national, past and present, for the president.

“Look, I have to be careful,” President Bush told me. “I don’t want to break down.”

Bush was 17 on December 7, 1941, a Sunday. Friends died in the Japanese attack. A day later he tried to enlist. Too young, he was told to return at age 18. Bush did, almost losing his life in 1944 when his plane was shot down.

From the first draft of the speech, I was determined to write a speech that would enable others to see the honor and emotion – the character of President Bush – that his staff saw each day.

For several weeks I studied what President Delano Roosevelt famously described as “December 7th, 1941, a date which will live in infamy.”

Bush speechwriter and editor – and future Fox News anchor – Tony Snow was helpful in editing: hard, but not harsh, grading every word.

“This is a very good speech,” Snow said in a memo in late November, “but it can be a great speech, and it must be.”

The next week a final draft was approved by Snow, communications head David Demarest, and then the president.

Only later did I learn that in Hawaii Bush was still so wary that he almost turned the speech aside. Demarest asked Brent Scowcroft, Bush’s friend and national security adviser, for support. Scowcroft reassured the president.

In his book, “White House Ghosts: Presidents and Their Speechwriters,” Robert Schlesinger wrote: “Bush spoke at 8:10 a.m. on a morning much like the infamous one a half century earlier: bright sun in a mostly clear sky, a slight breeze. The water gleamed. And he spoke with unusual eloquence.”

December 7, 1941 “was a bright Sunday morning,” Bush began. “Thousands of troops slept soundly in their bunks. Some who were awake looked out and savored the still and tranquil harbor. On the stern of the USS Nevada, a brass band prepared to play ‘The Star-Spangled Banner.’ On other ships, sailors readied for the 8 a.m. flag raising.

“Ray Emory, who was on the Honolulu, read the morning newspaper. On the West Virginia, a machinist’s mate looked at the photos just received from his wife. They were of his 8-month-old son, whom he had never seen,” Bush said, voice cracking.

“Think of how it was for these heroes of the Harbor – men who were also husbands, fathers, brothers, sons. Imagine the chaos of guns and smoke, flaming water, and ghastly carnage. 2,403 Americans gave their lives. But in this haunting place, they live forever in our memory – reminding us gently, selflessly, like chimes in the distant night.

“Every 15 seconds a drop of oil still rises from the Arizona and drifts to the surface. As it spreads across the water, we recall the ancient poet: ‘In our sleep, pain that cannot forget falls drop by drop upon the heart, and in our own despair against our will comes wisdom through the awful grace of God.’ With each drop, it is as though God Himself were crying,” Bush said, voice again breaking. “He cries, as we do, for the living and the dead.”

The president used mostly note cards. It was as if they grounded him, providing reference.

President Bush continued: “The men of Pearl Harbor … knew the things worth living for were also worth dying for: principle, decency, fidelity, honor. So look behind me at Battleship Row – the gun turret still visible and flag flying proudly from a truly blessed shrine,” Bush began his peroration.

“Look into your hearts and minds: You will see boys who this day became men and men who became heroes. Look at the water here, clear and quiet, bidding us to sum up and remember. One day, in what now seems another lifetime, it wrapped its arms around the finest sons any nation could ever have – and carried them to a better world.

“May God bless them,” Bush hymned, “and may God bless America.” He then whispered, “the most wondrous land on Earth.”

Tom Brokaw of NBC News saw Bush tearing up, and said, “Obviously a difficult speech by President Bush, who gets emotional at events that involve veterans, especially from World War II.”

The speech showed President Bush’s fear of the private turning public – and also his mercy, kindness, and feeling for fellow veterans, alive and dead.

America has hailed those traits since the 41st president’s death – even as it mourns a glorious and, above all, honorable life.

Curt Smith is the author of 17 books, including “George H.W. Bush: Character at the Core.” From 1989-93 and later, he wrote speeches for President Bush, including his Pearl Harbor speech, “Just War” address, and later the eulogy to former President Reagan. Smith is now senior lecturer of English at the University of Rochester.