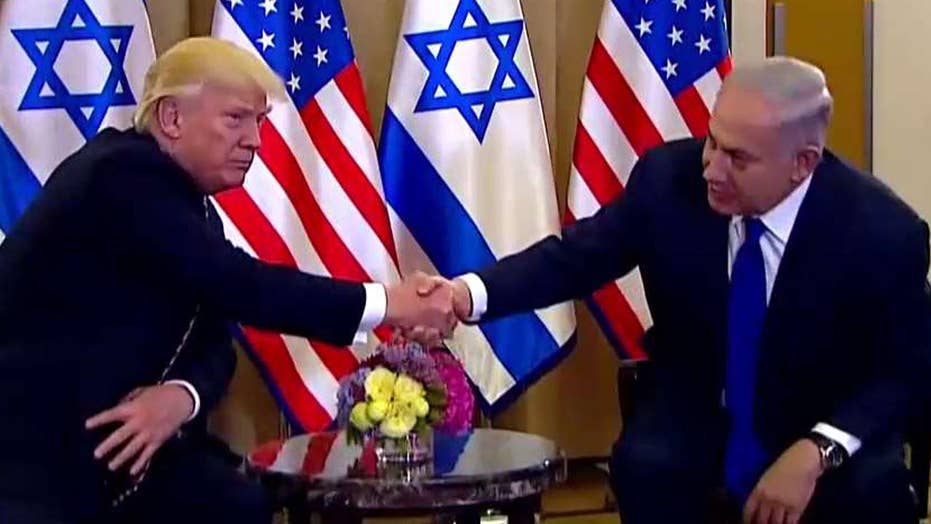 Trump: Iran will never have a nuclear weapon

Since the five permanent members of the UN Security Council and Germany concluded their nuclear negotiations with the Islamic Republic of Iran, several Iranian ballistic missile tests have been carried out. It is one of several facts that leaves no doubt about the persistence of defiant attitudes and threats to the international community coming out of the Iranian regime.

Even though such tests are plain violations of a UN Security Council resolution that accompanied implementation of the Joint Comprehensive Plan of Action (JCPOA), the global media and the nations of Europe have given unfortunately little attention to the issue. Under the previous administration, the White House downplayed such activities, which are obvious violations of the spirit of the closely-guarded JCPOA. Washington’s apparent dismissiveness also set the tone for the responses of European officials.

President Donald Trump is, rightly, developing an assertive policy toward the Islamic Republic. This includes a sharper focus on illicit ballistic missile tests. When the Iranian Revolutionary Guards Corps (IRGC) conducted another such test in the immediate aftermath of Trump’s inauguration, his administration responded by putting the Islamic Republic “on notice” over its destabilizing activities in the region. More recently, the White House has moved to new sanctions on the ballistic missile program. The U.S. Senate voted almost unanimously Friday to impose new sanctions on Iran (and Russia) for its missile program among other activities.

The modest limits imposed on the Iranian nuclear program will be worthless if the Islamic Republic emerges from the nuclear agreement with improved delivery systems which - being capable of reaching the whole of Europe - would constitute an immediate threat for European security and peace.

The European governments must quickly follow suit. The EU and the global media have been slow to adapt to the new geopolitical reality, and Tehran remains barely deterred from its brazenness. As a result the world paid little attention late in May when the IRGC announced that it had completed work on a third underground facility for the production of ballistic missiles.

The modest limits imposed on the Iranian nuclear program will be worthless if the Islamic Republic emerges from the nuclear agreement with improved delivery systems which - being capable of reaching the whole of Europe - would constitute an immediate threat for European security and peace. Already, Iran’s illicit tests demonstrate the capability of hitting Israel and Western assets throughout the Arab world. It is little wonder, then, that Israel, Saudi Arabia and others expressed mutual anxiety about the growth of Iranian power and influence on the occasion of President Trump’s recent visit to the region.

The EU has remained reluctant and hesitant about standing up to Iran’s destabilizing behavior and disregard for international rules. This has much to do with a false narrative and the political environment encouraged by the JCPOA. European leaders and businesses are ill-advisedly rushing – at their own risk - to gain access to Iranian oil and market. The IRGC currently controls more than half of the Iranian gross domestic product: it is nearly impossible to invest in the Islamic Republic without financing directly or indirectly the nuclear-capable missile program, as well as terrorist organizations and Iranian military interventions and “ethnic cleansing” in the Syrian and Yemeni civil wars.

The multiple functions of the IRGC also call attention to the fact that Iranian missile development does not exist in isolation. It has an impact on the types of capabilities that Iran is able to share with other entities which pose significant threats on their own. It is thanks to Iranian missiles that the Houthi rebels in Yemen have been able to penetrate deep into Saudi Arabian territory and target Western vessels around the Arabian Peninsula. The Islamic Republic also has a record of arming Lebanese Hezbollah, their proxies in Iraq and Syria, and Palestinian terrorist organizations like Hamas and Islamic Jihad which Tehran directly controls.

The White House is engaging in a more assertive policy vis-a-vis Iran.  European policymakers and public opinion must do their part. They should exert pressure on the EU and its national governments before their laxity leads to Iran taking a central role in a much larger crisis. They should look to the Iranian people and the expatriate community. They need to firmly support the forces of a truly democratic opposition, the values of freedom and human dignity those forces are striving for, and their fight against the clerical regime.

This message will be emphasized on July 1 in Paris, when the National Council of Resistance of Iran holds its Iran Freedom rally, with the participation of tens of thousands of Iranian expatriates, hundreds of high-profile figures from political, academic, and military backgrounds, and intelligence personalities from Europe, the United States, and many other countries. As on previous occasions - and even more now in an increasingly unstable Iranian environment - millions of Iranians will follow the event via satellite, taking personal risks, as a clear indication that the Iranian people support the NCRI and the measures the Council suggests. This, too, is a clear message that Europeans must recognize as a key reference in shaping their foreign policy.

“The Iranian regime's longest-suffering victims are its own people,” President Trump said during his May visit to Saudi Arabia. “Until the Iranian regime is willing to be a partner for peace, all nations of conscience must work together to isolate Iran, deny it funding for terrorism.” But terrorism is not the only issue. The regime’s weapons development must be severely constrained. And European nations need to get on board.