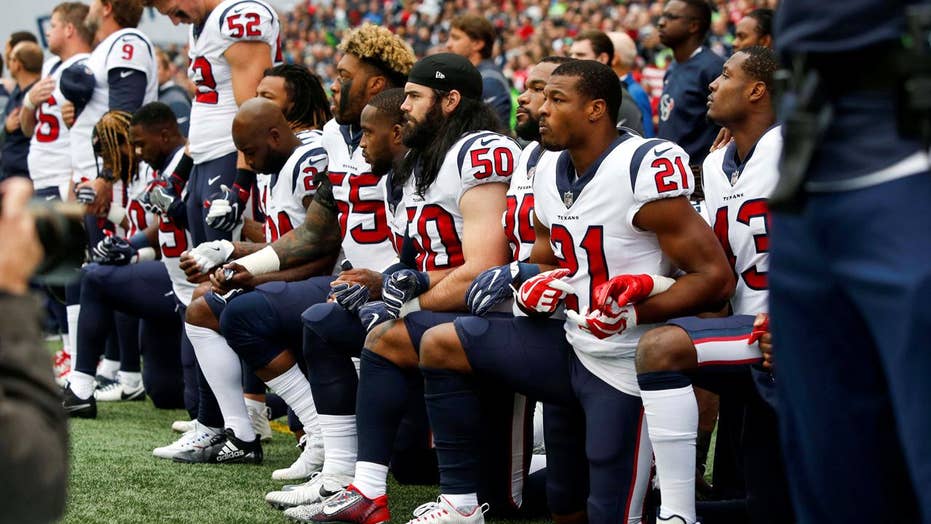 Finally, we get our NFL back. Football is supposed to be a sport that brings all Americans together. Not a sport used by a few activists to make a political point.

NFL owners approved a new national anthem policy Wednesday that requires all players to stand if they are on the field. However, it gives players the option to sulk in the locker room as everyone else puts their hands over their hearts or, if they’re in uniform, salutes the flag when the “Star-Spangled Banner” is sung.

If any player or players break this new rule by kneeling during the national anthem their team will be fined by the league. Teams also have the option of fining any player or other team personnel who disrespect the flag.

Why did it take so long for the NFL owners to approve this new rule?

NFL says teams will be fined if players on field do not stand and 'show respect' during anthem.

NFL players are basically television stars. NFL teams make money by playing in front of audiences who tune in to see their team play football. Is there any other television star who is allowed to protest during their job?

Do any of us have the right to protest at our workplaces?

The First Amendment to the Constitution protects our right to protest by preventing the government from unfairly infringing on our freedom of speech or peaceably assemble. It doesn’t restrict private companies from telling their employees how to behave at work.

Even when we protest in the public square we have to follow reasonable regulations designed to protect the safety and rights of others.

No one is arguing NFL players can’t use their huge platforms to broadcast their opinions. I hope they do. America is constantly revitalized by the power of free speech; this is especially true when the criticism is warranted.

A football game simply isn’t the place for such a protest. Sports bring us together. People from every economic background watch football. Democrats, Republicans and everyone else come together to watch their teams play.

Football has always been one of those things we have in common that brings us together. Many Thanksgiving dinners are saved when someone turns on a football game, an apolitical pastime we all can enjoy. For these reasons and more it should have been easy for NFL owners to pass this rule change a long time ago.

What held them up is a virulent strain of divisive politics being pushed mostly from the left.

“We want people to be respectful of the national anthem,” Commissioner Roger Goodell said.

Now any player who can’t bring himself to see all the goodness that is represented in the American flag and in the words of our national anthem – words written while the United States was under attack by a foreign power – can hide in the locker room.

The players who stay in the locker room will literally be shunning the country that has given them the chance to make millions of dollars playing football.

This isn’t a perfect country, but it was sullied by the few NFL stars who publicly showed disrespect to our national anthem and flag.