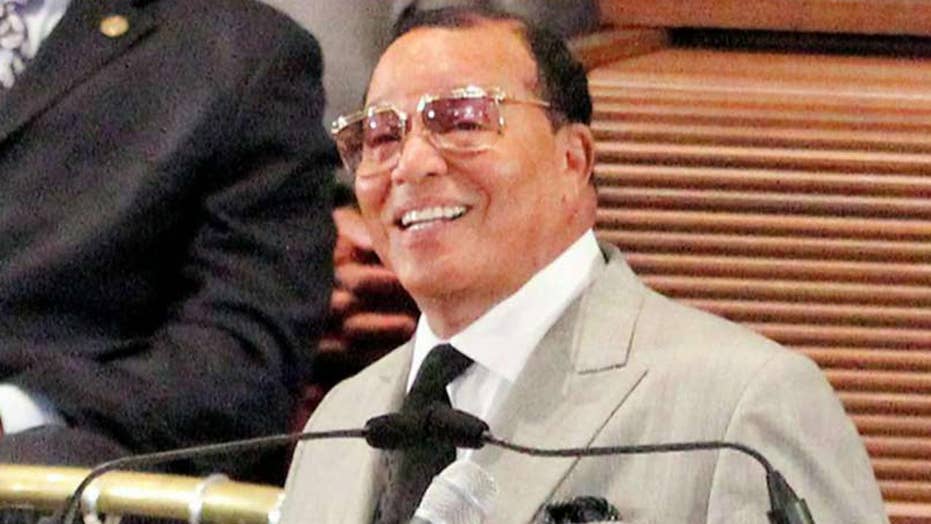 Opinion writer Jeremy Hunt calls out Farrakhan's 'legacy of bigotry' and the reluctance of the media to address the issue.

Racism and religious and ethnic prejudice are a cancer on the soul and deserve sharp condemnation by every decent man and woman – whether such bigotry comes from a neo-Nazi, a Ku Klux Klansman, a radical Islamic terrorist, or an American religious leader. But as the case of Nation of Islam hatemonger Louis Farrakhan sadly illustrates, too many on the left are reluctant to condemn hate when it is spewed by a black activist. They shouldn’t be.

I am a young African-American man and I’m well aware of America’s ugly racist past. The enslavement of my ancestors and the long years of discrimination that later generations endured after emancipation are indefensible and a blot on our nation’s history. They must never be forgotten.

Unfortunately, some on the left who want to atone for the very real sins of American racism believe that bigotry by a notorious black activist isn’t as morally reprehensible as bigotry by a white supremacist and anti-Semite. The truth is, such hatred is disgusting and immoral – no matter who expresses it.

Farrakhan has a decades-long history of racist comments aimed at whites and anti-Semitic comments demonizing Jews. And he’s proud of his vile rhetoric – posting videos of his speeches on YouTube, including this one just a few days ago in Chicago.

In the above speech Farrakhan declared: “White folks are going down and Satan is going down, and Farrakhan, by God's grace, has pulled the cover off of that Satanic Jew, and I'm here to say you're time is up – your world is through."

But Farrakhan’s racist and anti-Semitic comments don’t provoke as much outrage as, say, white supremacist and anti-Semite Richard Spencer. And it’s certainly not due to differing levels of influence. As journalist Matt Katz has pointed out, Farrakhan rallied in a 10,000-person arena last month. Just a few days ago, Spencer spoke to a gathering of 50. Any attempt to casually dismiss Farrakhan as an unimportant fringe leader is absurd.

It is wrong for the left to grant blacks an unspoken pass on race issues – just as it is wrong for some on the right to grant a pass to white racists. Both sides would do well to heed the words of the Rev. Martin Luther King, who condemned bigotry from whatever its source and said “injustice anywhere is a threat to justice everywhere.”

The problem is that both black bigotry and white bigotry feed off each other. You can’t give one a pass and expect the other not to metastasize. Farrakhan’s racist rhetoric emboldens white supremacists – and vice versa. The two can’t be morally separated into different camps. Evil doesn’t work that way.

But saying that Farrakhan is a black racist and anti-Semite is nothing new. What distinguishes his latest hateful rants is the left’s reluctance to condemn him outright.

Women’s March leader Tamika Mallory came under fire for proudly attending the “Saviour’s Day” event in Chicago where Farrakhan made his ugly comments quoted above. After nine days of silence, the Women’s March organization finally issued a statement denouncing “Anti-Semitism, misogyny, homophobia, transphobia, racism and white supremacy,” which seems carefully crafted not to alienate Farrakhan or his followers.

And The Daily Caller reports that seven Democratic lawmakers, including Rep. Maxine Waters of California and Deputy Democratic National Committee Chair Rep. Keith Ellison of Minnesota, have direct connections to Farrakhan. The Republican Jewish Coalition called on all seven this week to resign.

Many critics, including CNN’s Jake Tapper, have rightly called for these member of Congress and other leaders to condemn Farrakhan – who once said that white people “deserve to die” and that “Hitler was a very great man.” More people should join in the criticism.

Here’s the bottom line: Many people come from racial, religious and ethnic groups that have faced terrible discrimination and injustice. No one would question that African-Americans are in this group.

But being the target of bigotry is no excuse for embracing bigotry. Right is right, wrong is wrong, and wrong should be condemned whatever its source. Those on the left who fail to condemn Farrakhan should remember that and should be ashamed of their silence.