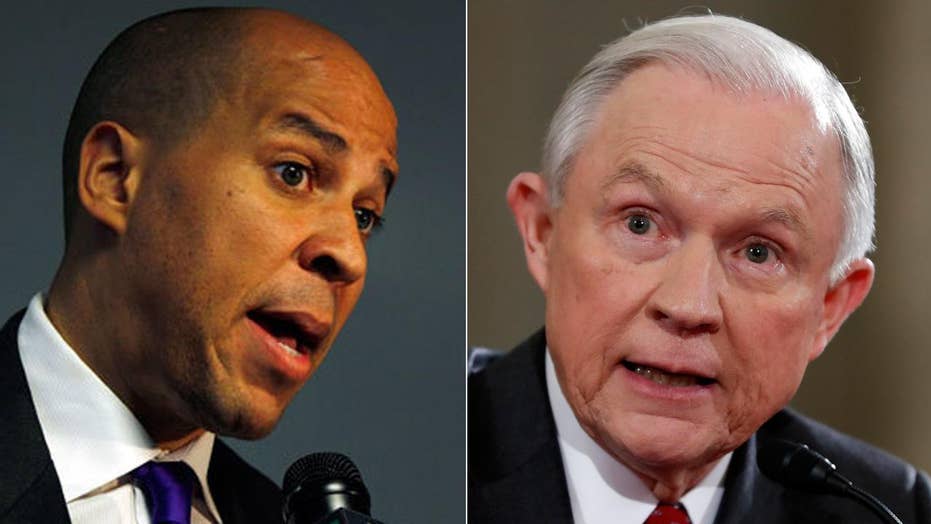 A historical first, Booker will testify against Sessions

In a new millennium already marked by political firsts  -- our first Black president, America’s first female presidential nominee, and the election of the first “non-politician” president  --  the American people have had a front row seat to another first on the floor of the U.S. Senate. Wednesday, for the first time, a sitting senator, New Jersey Democrat Cory Booker, will testify against another sitting senator, Alabama’s Jeff Sessions, at Session’s confirmation hearing to be our next attorney general. Who are the players on this political stage?

One man, Sessions, a Republican, has been a U.S. Senator for 20 years. Thirty-five years ago, when a KKK member was found guilty of lynching an African-American teenager, Alabama’s then-Attorney General Jeff Sessions helped to facilitate the state prosecution so that the death penalty could be imposed.

Henry Hays became the first white man executed in Alabama for murdering a Black person since 1913.

Sessions was also instrumental in breaking the back of Alabama’s KKK by imposing a $7 million civil judgment. He spent over two decades going after the Klan in Alabama.

Where does he stand on other policies that directly impact the Black community? He is opposed to abortion policies that take the lives of over 1,800 Black babies nationwide every day.

He is an advocate for education reform for African-American urban children via education savings accounts and school vouchers.

Sessions has stood against the damaging impact of minimum wage, which has led to an 83 percent unemployment rate nationwide among unskilled Black teen males.

He is a law and order advocate, which is music to the ears of the innocent living in our nation’s murder capital -- urban Chicago.

As a Southern, conservative, white American Jeff Sessions is not only responsible for the demise of the 1900’s Democratic terrorist group, Alabama’s KKK, but is also an unapologetic political advocate for those the most at risk within the African-American community.

Wednesday, Cory Booker, a senator from New Jersey broke precedent and testified against him. Booker, the former mayor Newark, New Jersey, is an advocate for full access to abortions, supporting Planned Parenthood, an organization whose eugenic roots were founded with the goal of eliminating the Black race. There have been over 40 million black babies killed since 1973.

Though once a proponent of school choice for poor Black urban children policies, he now appears to be waffling.  He remains an advocate for high minimum wages, though they have been statistically proven to result in a disproportionately high percentage of black teen unemployment, hopelessness and crime.

As a Northern, Black, American liberal, Bookers’ loyalty is to policies and a party that has wrought misery within every urban community it controls.

Unfortunately, the strategy of racial divisiveness we are witnessing on Capitol Hill this week is not new and has only become more prevalent over the last 8 years.

The Democratic Party’s attempts to smear, as evil racists, those who disagree with them will once again be seen this week on the Senate floor. With their target, a conservative, Southern, white Christian man they simply can’t help themselves.

Also predictable will be the political foot soldiers tasked with their frontal attack, members of what I call the royal Black class elites, while receiving direction from behind-the-scenes by the party’s liberal, white leadership.

It appears that, for the Democratic Party, the message of the November 2016 election has not yet resonated. That message, which came straight from “We the People” is that we’re seeking solutions that transcend our diversity to unite us. Black  -- or white -- racism has no place and will no longer be tolerated.

It is within our long fought-for nature that we strive “not judge by the color of skin, but by the content of character.”

As it was in 2016, future elections will prove to be of dire consequences for any politician or political party that uses divisiveness as a strategy.

It’s simply NOT the American way.