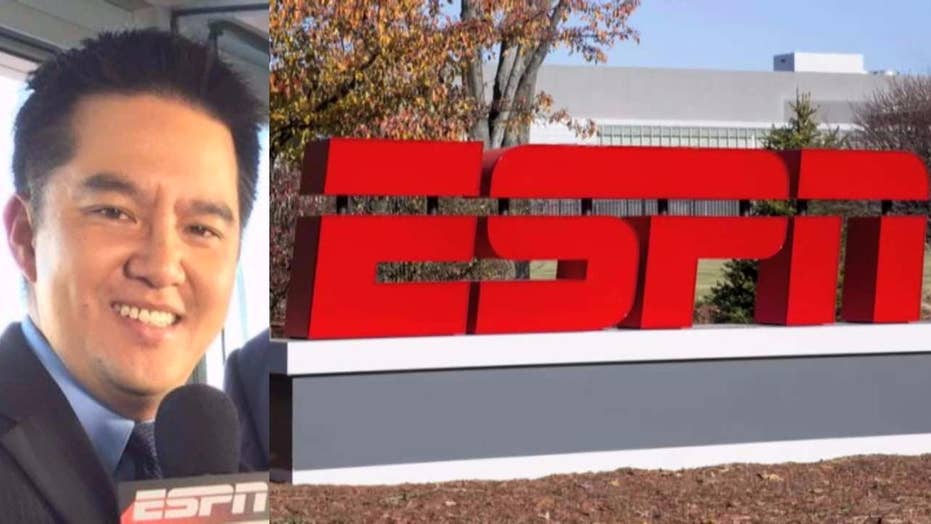 Fox411: ESPN's decision to pull announcer Robert Lee from the University of Virginia's football season opener because he has the same name as Confederate Gen. Robert E. Lee has backfired

ESPN recently targeted an Asian American for re-assignment due to the possibility that his name, Robert Lee, might offend black Americans.

You know what should offend black Americans? That ESPN thinks this might offend them.

You know what should offend Americans, period? ESPN and other liberal elitists like them trying to re-write history.

You know what else should be offensive? These same liberal elitists – black and white alike – who see themselves as Saviors whose god-like thoughts, actions and words can atone for the sins of other white strangers who died hundreds of years ago.

It is with this historical perspective that I would suggest that Democrats cease their obsession with apologizing for the deeds of those who died over 150 years ago. Instead I recommend that they focus on the impact of their own deeds today.

That is insulting – to me, as a black man, and to the past generations of millions of other successful black Americans.

It is thanks to the many decades of such re-writing of black history that most Americans are “shocked” to hear of the phenomenal progress made within the black community only decades after the end of slavery.

They are not aware, for instance, that it was visionary and entrepreneurial members of the black community who established our nation’s First Business Network, whose featured speaker at its very first national convention was none other than President Teddy Roosevelt.

They are not aware that America’s first female self-made millionaire was a black entrepreneur, Madam C.J. Walker, who was also renowned for her philanthropy and political activism.

No, the rewriting of history – and the desperate determination on the part of those who do the re-writing to turn all black Americans into victims – turns what should be aspirational and inspirational success stories, for black and white youth alike (but most particularly for black youth), into anomalies.

It was the American black community of the 1940s, 50s and 60s that led our nation in the post –World War II explosion of the middle class – which more than 40 percent of black Americans belonged to. It was an era when black men led all other races in the percentage of those committed to marriage, and in their participation as entrepreneurs and seekers of higher education.

It is with this historical perspective that I would suggest that Democrats cease their obsession with apologizing for the deeds of those who died over 150 years ago. Instead I recommend that they focus on the impact of their own deeds today.

It is due to their own policies that the community that has trusted them most – a community that was once productive, independent and competitive – is now at the very top of our nation’s misery index.

Here’s what I would like to hear an apology for. I’d like the Democratic Party to apologize:

?         For the 83 percent of black teens who are unemployed due to Democratic policies like the Davis Bacon Act and minimum wage laws;

?         To the urban community for the lost lives and lost property due to the angry and violent “activists” bred every election cycle by them;

?         For the use of policies that breed black misery as a strategy for re-election.

As Americans begin to understand the destructive nature of the Socialist- and Marxist-inspired liberalism that has been wrought upon the black community, my hope is that they will also begin to acknowledge the dangers of this godless, empathy-free and anti-American ideology – and come together to pull all of our communities and our nation back from its dark abyss.

That is a history that I would be happy to write.

Burgess Owens is a former Super Bowl champion who played ten seasons in the National Football League for the New York Jets and the Oakland Raiders. Author of "Liberalism or How to Turn Good Men into Whiners, Weenies and Wimps" (Post Hill Press, July 19, 2016), he is currently CEO of Responsive Health Care Solutions and a motivational speaker who travels throughout the country. Visit him at burgessowenstalks.com.