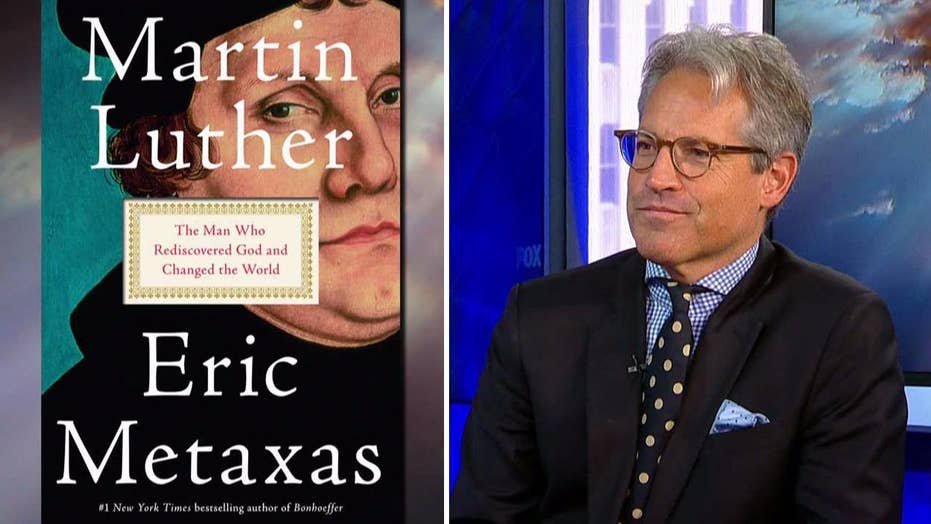 Spirited Debate: Eric Metaxas on how Martin Luther's actions have impacted history, 500 years later, and his new book 'Martin Luther: The Man Who Rediscovered God and Changed the World.'

Editor's note: The following is an excerpt from Eric Metaxas' new book,  "MARTIN LUTHER: The Man Who Rediscovered God and Changed the World."

One of the greatest challenges in telling the story of Martin Luther is distancing him from the endless fables, myths, and tall tales told about him in the last five centuries.

During his lifetime, Luther’s celebrity grew at such a pace that the momentum of it could not be slowed even by his death. In fact, the magma of his celebrity soon cooled into hagiographic stone, such that much of what the world has come to “know” about him is fiction.  The most well-known ”facts“ of his life illustrate the point.

First, he was born into a family of peasants, the poor son of a miner who was raised in a home humble and cramped; second, his hardscrabble upbringing was a brutal one in which his dour working-class father buffeted him so viciously that it warped his psyche, causing him to see God the Father as a similarly glowering and sadistic figure to be placated and assuaged in endlessly humiliating religious contortions—or to be avoided entirely.

Third, it was a literal bolt of fire from the heavens that caused the jumpy twenty-one-year-old suddenly to blurt out a binding vow—one he had never previously considered but that in his abject fear he indeed spoke—and then felt duty bound to honor the rest of his born days, thus leading him to become a monk.

Fourth, it was on a trip to Rome that he was so shocked at the blasphemous devilry of that vile city that he decided he must destroy the soft and decadent Italian church and remake it in his own uncompromising and upright German image.

Fifth, he began this lifelong project by angrily and defiantly hammering his damning accusations against Rome onto the very door of the Castle Church in Wittenberg, thus putting the quivering pope on notice that his deeds had been weighed in the balance and found wanting.

Sixth, after his great stand at the Diet of Worms—where he said, “Here I stand. I can do no other!”—he fled to the Wartburg, where in his overflowing umbrage he took on the devil personally and at least once punctuated his fury by hurling a pot of ink at the fiend who dared to trespass his quarters. Indeed, anyone who doubts this need only go to the Wartburg to see the swart blots themselves, still staining the wall of his cell these five centuries later.

Seventh, the nun he married escaped from her nunnery by hiding inside a large barrel that had only just been emptied of herring. In fact, all of the twelve nuns hid in filthy herring barrels secured to the wagon that hurtled them away to freedom.

These important details have been recounted innumerable times and are being confidently recounted this minute, told in tours of Luther sites around Germany in many languages, being written and read in otherwise excellent books about Luther, and posted in online articles and blogs. But not a single one of these seven things is true. They are each sloppy glosses on the actual facts and have over time congealed and finally ossified into the marmoreal narrative that has existed for half a millennium.

Parson Weems’s pious legends of Washington chopping down cherry trees and casting silver dollars across the wide Potomac persisted for about 150 years, but these false details about Luther have persisted for more than three times as long.

Their cultural roots are therefore that much deeper. It is my hope that "Martin Luther" will do its humble part in uprooting them.

Adapted from "MARTIN LUTHER: The Man Who Rediscovered God and Changed the World" by Eric Metaxas, published on October 3, 2017 by Viking, an imprint of Penguin Random House LLC. Copyright © Eric Metaxas, 2017.

Eric Metaxas is the author of several bestselling books, including "Bonhoeffer" and "Amazing Grace." His latest book is "MARTIN LUTHER: The Man Who Rediscovered God and Changed the World" (Viking, October 3, 2017).