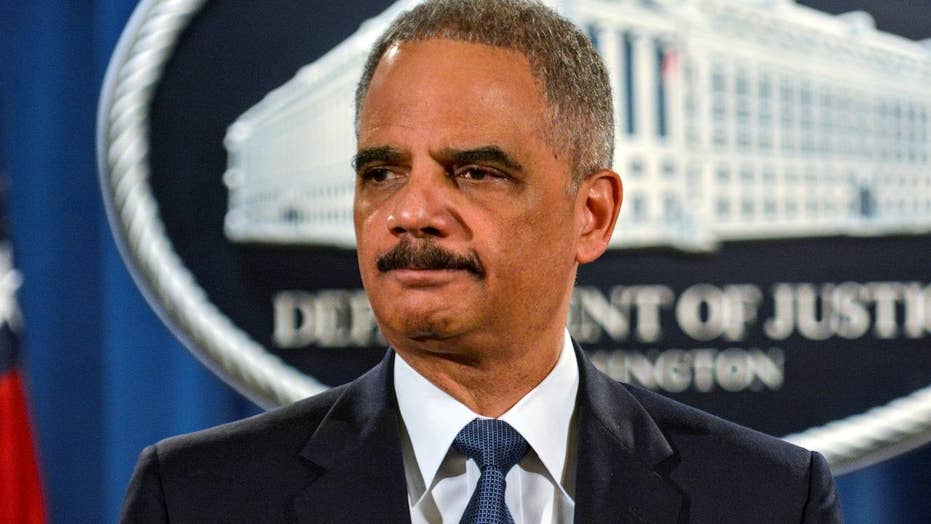 Former Obama Attorney General Eric Holder raised eyebrows last week when he said that he may run for office, as in the Oval Office, and he’d make his final decision by the end of the year. Given the trail of abuse and misconduct he left in his wake at the Justice Department, the opposing ads pretty much write themselves.

His time in the Obama administration was plagued with corruption that left a stain on the Justice Department, and he resigned with a dark cloud of scandal hovering over him.

Holder is the first Cabinet appointee to be held in contempt of Congress for not turning over documents relating to the Department’s Fast and Furious scandal. The scandal permitted the sale of assault weapons to drug cartels in Mexico as a way to supposedly track them.

However, it was later discovered from internal communications that it was all just a front to win political points in the gun debate. Holder thought if the Obama administration could devise a dangerous enough situation, then they would be in a position to demand more gun laws.

While they were busy trying to score political points with assault weapons, people died. People like Border Patrol Agent Brian Terry, who was killed with one of the almost 2,000 guns the Justice Department sold, but then failed to keep track of through the program.

Holder’s Justice Department was also embroiled in an IRS political persecution scheme that purposely targeted conservative and Tea Party groups who applied for tax-exempt status. Their applications were stalled, sometimes for years, while IRS agents probed for additional information that was inappropriate and out of the ordinary. Last year, the IRS admitted to the wrongdoing in court and publicly apologized.

However, in 2015, the Obama Justice Department, headed by Holder until Loretta Lynch replaced him in April of that year, announced they would not prosecute anyone at the IRS for the scandal. Their reasoning? Apparently after investigating they said no evidence was uncovered “that any IRS official acted based on political, discriminatory, corrupt or other inappropriate motives that would support a criminal prosecution.”

But of course there was no evidence, because the IRS destroyed countless hard drives containing the evidence. The apparent crime was bad enough, but Holder’s cover-up was even worse.

Recently, Holder, possibly getting his talking points in order for a potential presidential run, criticized the Trump administration for apologizing to conservative groups targeted by the IRS under President Obama.  According to Holder, “That apology was unnecessary, unfounded and inconsistent, it seems to me, with the responsibilities that somebody who would seek to lead the Justice Department should have done.”

Maybe somebody should tell Mr. Holder the IRS already admitted they targeted conservatives, and Obama cronies can stop covering for them now. Former IRS official Lois Lerner publicly apologized and pleaded the Fifth Amendment when Congress brought her in for questioning.

She couldn’t be prosecuted though, because the IRS destroyed her emails with all of those hard drives. Nothing to see here, right Eric?

Also on Attorney General Holder’s watch, large companies could make settlement payouts to groups not affiliated with their cases. President Trump’s Justice Department put an end to this last year, as the payments were thought to help liberal organizations.

House Judiciary Committee Chairman Bob Goodlatte, R-Va., released emails from the Justice Department last year which showed they had a say in who the money went to, and they may have once again discriminated against conservatives by ensuring conservative groups didn’t receive settlements.

Eric Holder has a history of scandal and corruption that will follow him into any public office that he pursues. He tarnished our Justice Department with reckless discrimination, questionable judgement and outright lawlessness.

However, if Holder wants to run, bring it on. He’s given Republicans all the campaign material they need.