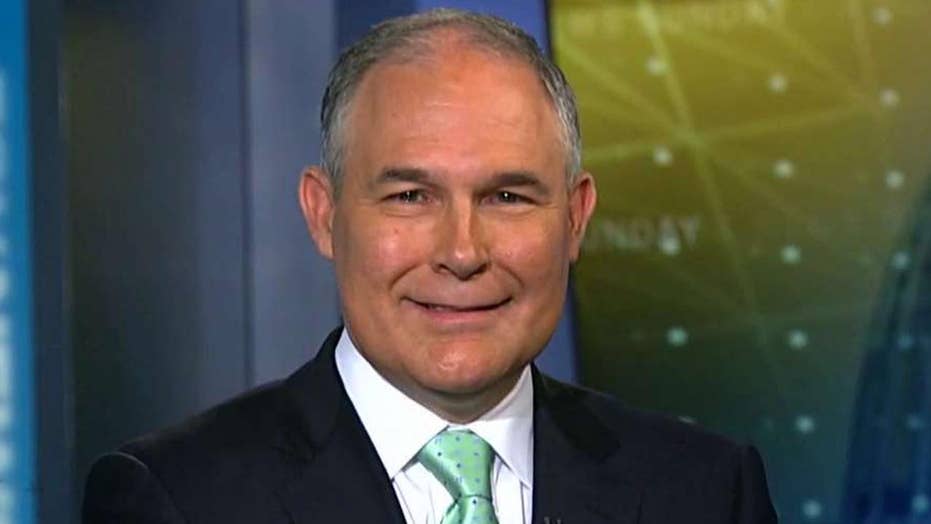 One year ago, on June 1, 2017, President Trump boldly and courageously announced that the United States would withdraw from the Paris Climate Agreement.

This was a historic moment that upheld the president’s campaign promise and demonstrated to the world that he puts the American people first. The president’s decision, together with his decisive actions through regulatory reforms and tax relief, is unleashing the American economy.

The unemployment rate has fallen to 3.9 percent – a low not seen since 2000. Since Election Day, the economy has added 3.3 million new jobs and wages are rising.

The president’s actions rejected the misguided narrative that we must choose between protecting the environment and growing the economy. That is a false choice. And it is inconsistent with America’s environmental track record. We can do both, and we have done both – better than any other nation, in fact.

The president’s actions rejected the misguided narrative that we must choose between protecting the environment and growing the economy. That is a false choice. And it is inconsistent with America’s environmental track record.

We have also made incredible strides improving air quality throughout the nation over the past several decades. Since 1970, total emissions of the six criteria air pollutants regulated under the National Ambient Air Quality Standards established through the Clean Air Act have dropped 73 percent.

These achievements are attributed largely to American innovation, such as highly effective pollution-control equipment, advanced production technologies, and increasingly efficient practices across all sectors of our economy.

It is the genius of the free market, not burdensome government mandates, that has delivered this unrivaled accomplishment.

The previous administration threatened to derail this progress through regulatory overreach. But President Trump’s actions ensure that we will continue to promote America’s energy independence and economic growth, while also protecting the environment.

Under the commitments made by the prior administration, the Paris Agreement was estimated to put at risk as many as 2.7 million American jobs by 2025, according to NERA Economic Consulting.

At the same time, the Paris Agreement imposed no serious emissions reduction obligations on China or India for many years. On top of this, the Paris Agreement would also require the United States to contribute billions of American taxpayer dollars in the coming years, with no clear benefit to hardworking Americans.

President Trump understood that this was a bad deal for the American people.

Thanks to President Trump’s leadership, the Environmental Protection Agency has refocused on its core responsibilities of protecting human health and the environment.

We are making tremendous progress on these fronts, including working cooperatively with states to improve air quality throughout the country, accelerating the cleanup of contaminated lands in the Superfund program, and incentivizing repairs to the nation’s water infrastructure.

Our booming economy and improved environment are a uniquely American success story that should be recognized, celebrated, and replicated around the world. We owe no apologies to other nations for our environmental stewardship.

President Trump’s decision to withdraw from the Paris Agreement was one of the earliest indications of his commitment to put America first. From regulatory reforms to tax relief, the president continues to take decisive action on behalf of hardworking Americans. America is stronger today because of President Trump’s actions.

Scott Pruitt is the 14th administrator of the U.S. Environmental Protection Agency. He previously served as Oklahoma's attorney General and in the Oklahoma State Senate.