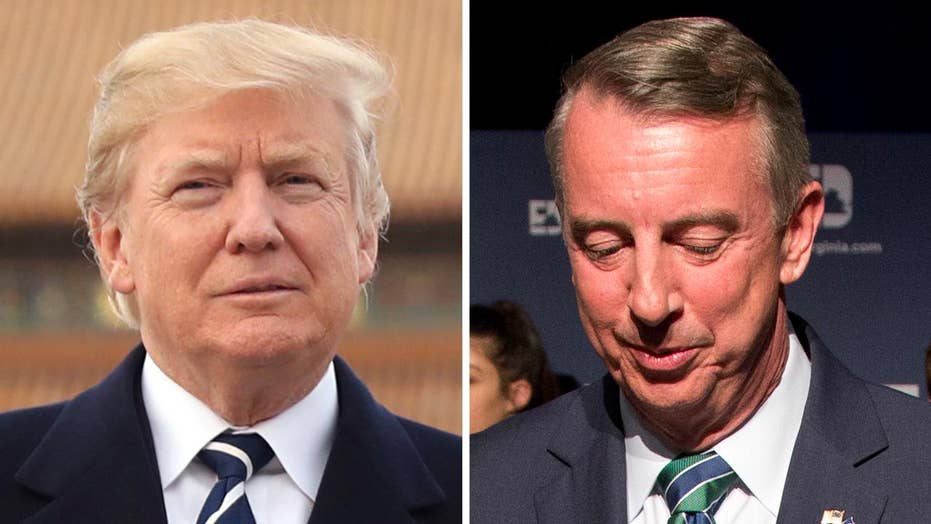 Trump blames Gillespie for election loss: Did not embrace me

In addition, Virginia Democrats surprised just about everyone by winning at least 15 additional seats in the state House of Delegates. The vote totals for four additional seats were so close that they qualify for a recount. The final results will determine which party controls the chamber.

For Republicans nationally, the Democratic victories Tuesday raised the possibility of losing a GOP majority in the U.S. House of Representatives next November, followed by the possible impeachment of President Trump in 2019.

The Virginia results showed that running as President Trump’s Mini-Me in not a surefire winning strategy for GOP candidates. Indeed, Trump himself lost the popular vote nationally to Hillary Clinton by nearly 3 million ballots and recent opinion polls show that most likely voters disapprove of his job performance.

If Republicans are to hold their majority, they need to frame the 2018 midterms as 435 separate House races, with a message specifically tailored by locale. If they don’t, in 2019 House Democratic Leader Nancy Pelosi of California may once again be wielding the speaker’s gavel.

But despite the good news for Democrats on Tuesday, winning majorities in the U.S. House and Senate in 2018 will be far from a slam-dunk.

From the looks of things, last November’s cultural divide has only grown larger as the electorate cleaves along the lines of education and race.

Even as Tuesday provided the Democrats with a sorely needed shot of adrenaline, the disenchantment of rural Americans and white working-class voters with Democratic candidates remained on display.

In the Virginia election for governor, Republican Ed Gillespie – despite losing statewide to Democratic Lt. Gov. Ralph Northam by 9 points – racked up larger margins in Shenandoah Valley, Southside and Southwest Virginia than Ken Cuccinelli, the 2013 unsuccessful Republican candidate for governor.

At the same time, Northam captured 51 percent of white college grads – a first for a Virginia Democrat. Gillespie, in turn, garnered a whopping 46 point margin among whites without a college degree – and still lost.

For Democrats in 2018 races, the question now becomes whether they can get beyond their natural upstairs-downstairs coalition, and win back some white working-class votes. A recent study  shows that 2016’s exit polls got it wrong, and that white working-class voters were by far the single largest voting bloc, as opposed to just another voice in the room.

According to the Center for American Progress, a liberal group, in the 2016 elections “white college graduates were only about 29 percent of voters, while their non-college-educated counterparts far outdistanced them at 45 percent of voters.”

Against this backdrop, Democrats need to think twice before they decide to heedlessly trample on cultural sore points.

Obviously, what plays well in Manhattan doesn’t necessarily translate into applause lines in Virginia’s Coal Country. Yet, from the way some Democrats act, you would never know it.

After Hillary Clinton trashed Trump voters as deplorable, or rooted for the death of the coal industry, her losses across the Rust Belt cannot be written off as a total surprise. Clinton’s neglect, if not disdain, for nearly half the electorate came with a steep price.

As a corollary, Democrats need to come to grips with the discomfort felt in Middle America over issues like immigration and crime.

If 2016 taught us anything, it’s that branding large swaths of the electorate as racist is not a winning strategy.

Instead, Democrats would do well to start talking about citizenship as a privilege, not a right, and speaking about responsibilities and duties that come with being an American.

The Republicans have an equally daunting task, running in a general election with the millstone of the Trump presidency hanging from their necks. The latest generic ballot polls asking voters which party they will support in the 2018 congressional races show the Democrats with an almost 10-point lead on average, Real Clear Politics reports – a margin large enough to make Republicans sweat.

There’s more to politics and life than a booming stock market, as the GOP learned Tuesday.