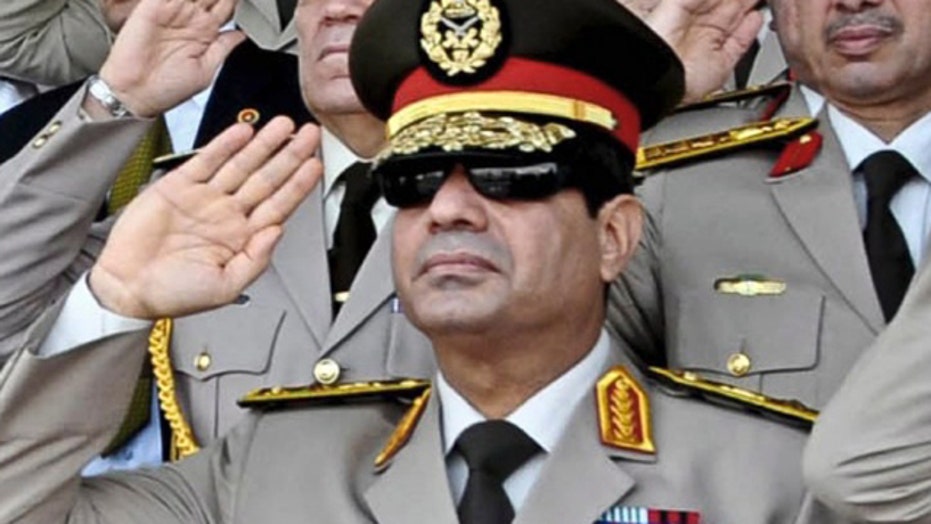 As we commemorate the 50th anniversary of Sir Winston Churchill’s passing and historic state funeral (on Jan. 24 and 30, 1965), shockingly few have noticed that he has an apparent successor in our time.

And that figure is neither European nor American — but a Muslim leader in the Middle East.

On Jan. 1, Egyptian President Abdel-Fattah el-Sisi— elected last June to replace Mohammed Morsi of the Muslim Brotherhood, whom he overthrew at overwhelming popular demand in July 2013 — did something unthinkable in the modern history of his country, and perhaps in the history of Islam.

After calling vaguely for reform in “religious discourse” several times since he came to power in an effort to combat Muslim extremism, the former field marshal went in person to al-Azhar — the highest authority in orthodox Islam — and told the sheikhs gathered in celebration of the Prophet Muhammad’s birthday that something evil threatens the continued life of their creed.

And this threat, he said, comes not from the infidels, but from themselves — as well as their modes of thought and the texts they use to interpret their religion.

As quoted by the Middle East Media Research Institute (MEMRI):

"I am addressing the religious scholars and clerics ... It is inconceivable that the ideology we sanctify should make our entire nation a source of concern, danger, killing and destruction all over the world. It is inconceivable that this ideology ... I am referring not to 'religion,' but to 'ideology' — the body of ideas and texts that we have sanctified in the course of centuries, to the point that challenging them has become very difficult."

In Islam, traditionally it is the ulama — the religious scholars — who lecture the secular authority on such matters, not the other way around.

Given that he depends on al-Azhar to legitimize his rule — its leader, Sheikh Ahmed al-Tayeb, stood with him in solidarity (along with the head of Egypt's Coptic Church, Pope Tawadros II) after Morsi's removal — this was a huge risk indeed.

Sisicrowned his appeal by making what could have been an even more dangerous personal appearance, standing with Pope Tawadros again — this time to attend midnight Mass at the Coptic Cathedral in Cairo on Jan. 6 (Orthodox Christmas Eve), something no modern Egyptian ruler had ever done before, where he declared:

As Middle East analyst Raymond Ibrahim (who provided the quote above) has pointed out, more and more popular Islamic preachers condemn any celebration of Christmas by Muslims as unbelief.

Almost unnoticed as well, Sisihas quietly scrapped the reactionary program of religious education in the public schools in favor of a more secular one to inculcate basic civic values, rather than strictly Islamic ones — a revolutionary act in itself.

How different from our own President Obama, who backed the widely hated Muslim Brotherhood in the Arab Spring, and still won’t acknowledge the Islamist ideology of our enemies--which he refers to vaguely as "extremism," denying its connection to Islam.

Instead, his spokesman, Josh Earnest, has pledged that Obama will seek to prevent media coverage that might provoke the terrorists.

“The president … will not now be shy about expressing a view or taking the steps that are necessary to try to advocate for the safety and security of our men and women in uniform,” Earnest said in the White House press briefing on Jan. 12 in answer to a question on the issue.

As a young man, at the battle of Omdurman in 1898, Churchill fought against the jihad--Islamic holy war--led by the Mahdi’s successor in the Sudan, which sought to restore the slave trade and spread Shariah law in the Nile Valley and across the world.

Though Britain’s empire is a thing of the past, the jihad survives. Despite many permutations, the ideology that drives our Islamist enemies today is essentially the same as it was in the days of the Mahdi, and in countless jihads before his own.

And as shown in countless attacks from 9/11 and before to those in Paris this month, and its declared intention to destroy us, it is every bit as great a threat to our freedom and way of life as the Nazi enemy that Churchill most famously rallied the Western Allies to defeat in World War II.

Like Churchill, Sisi seems more and more a lion. And, also like the pugnacious British statesman, he is definitely not PC.

No doubt el-Sisi, fighting a dangerous, increasingly Islamist State (IS)-led insurgency both in Sinai and along the border with now-destabilized Libya, could identify with Churchill’s clarion call of May 13, 1940, which sounds eerily fitting today:

"You ask, what is our aim? I can answer in one word: Victory. Victory at all costs, victory in spite of all terror, victory however long and hard the road may be; for without victory, there is no survival."

But don’t expect such stirring words from Obama, who sent the bust of Churchill that British Prime Minister Tony Blair had lent to President George W. Bush eight years earlier back to London shortly after he moved into the White House in 2009.

Instead, in last Tuesday’s State of the Union address, Obama blandly recited a list of dubious achievements in a war, and against foes, that he would not clearly define (and in his 2013 Inaugural, even invoked — a la Neville Chamberlain after Munich — "peace in our time").

Our enemies know just who they are, and what they are fighting for — and so does el-Sisi.

The question is, do we?

Raymond Stock, a Shillman-Ginsburg Writing Fellow at the Middle East Forum and Instructor of Arabic at Louisiana State University, spent twenty years in Egypt and was deported by the regime of Hosni Mubarak in 2010 for an article he published in Foreign Policy Magazine in 2009. He is writing a biography of 1988 Egyptian Nobel laureate in literature Naguib Mahfouz (1911-2006) for Farrar, Straus & Giroux, and is a prolific translator of his works.