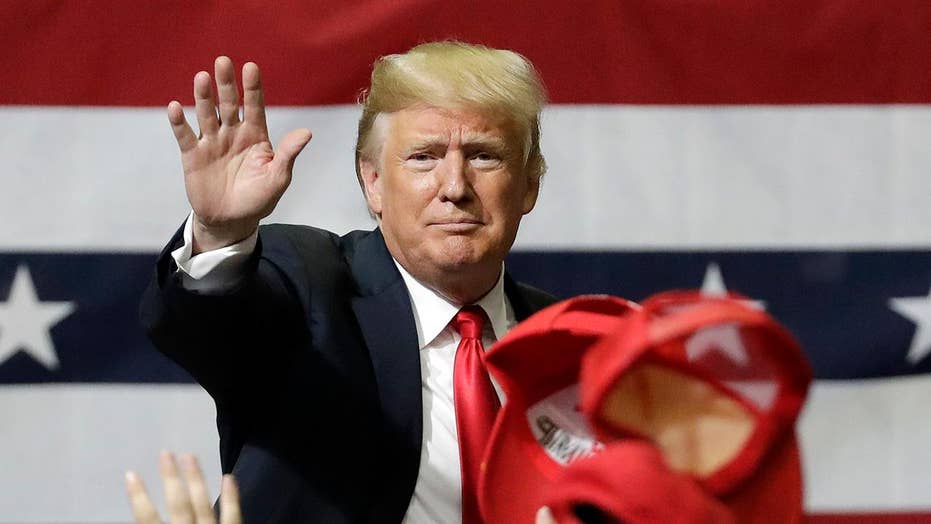 President Trump says there's 'no reason' to go on about the great economy during the border crisis while Paul Ryan reportedly disagrees.

The election on Tuesday will end one of the most negative, intense, expensive and unpredictable elections in modern history. We’ve endured months of wall-to-wall negative advertising with constant robocalls, text messages, direct mail and everything else to make voters irritated at the invasion of their privacy, and not necessarily enlightened about their choices.

If this was a typical midterm election, the success of the president's programs – record-low unemployment and the strong economy – would be front and center. The Democrats would try to counter all of that and make this a referendum on President Trump. (Historically, the president’s party loses seats.)

But beginning in September – the usual kickoff for a fall campaign – the nation's attention was instead focused on one of the most vicious Supreme Court confirmation hearings in history. Millions of Americans watched the non-stop media coverage. It was reality television and the country was polarized by the commentary of anchors and political pundits arguing points of view without facts.

The public was riveted by the soap opera-like drama and Americans were divided over the process and the nominee. Republicans thought Brett Kavanaugh was extremely qualified and was being falsely accused; Democrats believed his accusers despite a lack of evidence and thought he should be defeated.

Justice Kavanaugh was confirmed to the Supreme Court by a razor-thin 50-48 approval vote. Republicans were energized by the battle and angered by the Democrats’ tactics. It temporarily created some momentum in the Republican base that hopefully will last to Election Day. I assume it did the same for Democrats.

The next national story that dominated the media and nation's attention was the attempted murder by homemade bombs of several prominent Democrats including former Presidents Barack Obama and Bill Clinton; former Secretary of State Hillary Clinton; former Attorney General Eric Holder; Rep. Maxine Waters, D-Calif.; Rep. Debbie Wasserman Schultz, D-Fla.; and others. The perpetrator was a seriously disturbed misfit – a minor criminal living alone in a van in a South Florida suburb.

Fortunately, due to the superb efforts of the FBI and other law enforcement officials, the alleged bomber was quickly tracked down and captured. The FBI says the bombs were real but fortunately they didn't discharge and no one was injured.

At nearly the same time, the shocking, hate-filled murders of eight members of a Jewish congregation occurred in Pittsburgh. They were praying in their Shul on a Saturday morning. The murderer was another deeply deranged, cold-blooded bigot living an uneventful life in the shadows. The innocence of the victims, and the stories about the goodness of their lives and deeds that we heard in the aftermath of their deaths, certainly disturbed us all.

The widely-covered migrant caravan on the march to our southern border has also dominated the media in the closing days of the campaign. President Trump has correctly determined that they are not going to crash the border and enter the county illegally. If it takes military troops to back up the border patrol, and executive orders to fully implement his plans, the president is willing to do it all.

Immigration and border security are priorities for this president and for most of his supporters. Most Democrats strongly oppose them and instead want to run on things like health care for all and other traditional social programs.

While all of this is going on, thousands of candidates running from coast to coast for local, state and federal offices are having a hard time getting voters to focus on the issues that they want to run on.

Historically, far fewer voters participate in midterms than in presidential elections. Turnout in 2014, at 37 percent of eligible voters nationwide, was the lowest for a midterm election since World War II. (For comparison, in the 2012 and 2016 presidential elections, turnout was about 61 percent.)

This will definitely change in this election, with the modern midterm record of 48.7 percent in 1966 possibly being broken.

Even though most analysts think the House can be taken back by the Democrats (they need a shift of 23 seats), there is no certainty until the votes are counted late Tuesday night, and maybe not for several days thereafter with potential recounts.

The biggest hurdle Republicans face is that they are defending 41 open seats where members are either not running for re-election or are running for other offices. They also must defend 27 seats held by Republicans in states that Hillary Clinton carried in 2016.

Here is what I do know will happen on Tuesday. More Democrats will be elected to the House and governorships – possibly a majority of each. Republicans should hold the Senate and may add a seat or two to their present majority. And certainly, they are not conceding the House at this point.

The president has been a tireless campaigner and will be a factor in many people’s vote. No president has ever campaigned as aggressively as President Trump, and he has made this election about him and his policies.

Former President Obama and former Vice President Joe Biden have campaigned like they are on the ballot. Obama has tried to rewrite his history. Mrs. Clinton and, to a lesser extent, her husband are trying a redo of 2016, or maybe a practice run for 2020. So are many other potential 2020 candidates, including Oprah and the cast of dozens dying to take on President Trump. They’re campaigning everywhere for the Democrats.

There is only one sure thing come Wednesday. President Trump will still be the man in the White House with all his powers intact. The Supreme Court is full and will be conservative for the foreseeable future. The Congress will have many new members but the hostility between the two parties will only be more intense.

The big issues both parties have campaigned on – immigration reform, border security and tax cuts on the Republican side; health care, infrastructure and social programs on the Democratic side – can’t be done without some bipartisan agreement.

And the 2020 campaigns will begin immediately.