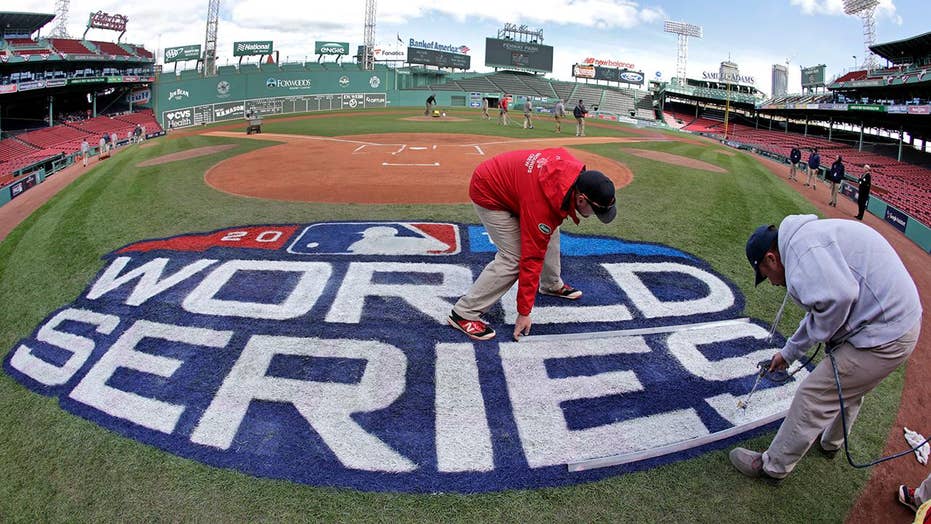 Teams will battle for the MLB championship for the first time in over 100 years; Molly Line reports from Boston's Fenway Park on the history of the matchup.

In 1958, Brooklyn Dodgers owner Walter O’Malley broke countless hearts when he moved the team known as the Boys of Summer to Los Angeles – dumping the guts and grit of Ebbets Field for the glitz and glamour of Hollywood.

The cross-country move that created the Los Angeles Dodgers came just two seasons after O’Malley had the gall to dis the legendary Jackie Robinson, who had broken baseball’s color barrier and hardly deserved such shabby treatment (traded to the hated Giants no less).

A full 60 years after that move, the Dodgers are back in the World Series against the Boston Red Sox, and I’ve decided to root for the Dodgers for the first time in my life. That’s largely because of my admiration for Robinson, the subject of my book “42 Faith.” Robinson, who died 46 years ago Wednesday, was snubbed by the Red Sox before he made history with the Dodgers.

Rooting for the Dodgers once would have been heresy within my New York family. My relatives have always taken their baseball seriously, and proudly rooted for the Yankees when they beat the boys from Brooklyn in six remarkable World Series matchups in the 1940’s and the 1950’s. (I grew up hearing about an uncle who literally smashed his foot into his television set in 1955, the sole time the Yankees lost to Brooklyn in a Fall Classic).

Yes the rivalry between the Yankees and Dodgers has continued since they moved to LA, with four more World Series matchups, each team winning two. Their last face-off was 1981, and I remember the joy of my Dad taking me to my first World Series game at the age of 10. As we wrapped up Game Two to take a 2-0 series lead, my Dad excitedly predicted that even if the Yanks happened to lose one game in LA, we could win the title back home in New York.

That joy quickly evaporated when the Dodgers won the next four straight, mercilessly sealing it on our home field. We had counted our chickens before they hatched. But 1981 was an eternity ago, and I simply do not hate the Dodgers the way my ancestors did.

The Red Sox are another story. When current Yankees manager Aaron Boone was still playing in 2003, and hit the home run that sealed a dramatic comeback playoff win against the Sox, I was so jacked up that I kicked the side of a recliner chair in my living room and nearly broke my foot (a twist on my uncle kicking a tv screen over a loss).

The Red Sox sure got their revenge the next year when they staged the most dramatic comeback in baseball playoff history over the Yankees in 2004 – we counted the chickens again – and the Sox have been very successful ever since. Hence my feeling that the Dodgers are the lesser of two baseball evils for me.

History shows that Robinson certainly shared my distaste for the Red Sox. But even this Red Sox skeptic has to admit the team has tried to right the wrong.

In 1945, the Red Sox brought Robinson and two of his colleagues from the Negro Leagues in for a tryout at Fenway Park, their historic home. In truth, the tryout was a sham. The team was simply trying to get off their backs a local politician, who was threatening to ban baseball in Boston on Sundays unless black players started getting a chance.

Robinson did not know any better and was hitting the cover off the ball. “Nobody put on an exhibition like we did,” he said later. “Everything we did, it seemed like the good Lord was guiding us. Everything the pitcher threw up became a line drive someplace.”

Yet Robinson realized the truth when a Red Sox official allegedly shouted a racial slur from the stands, making it clear there was no intention of signing the future hero.

That was clearly a searing experience for Robinson, to the point that when the Dodgers first approached him about a possible contract later in 1945, he did not believe it was real. In a previously unpublished manuscript, I found in Robinson’s papers at the Library of Congress, he recounted a restless overnight train ride to Brooklyn to meet Dodgers general manager Branch Rickey for the first time.

“It seemed too much to hope that he intended to give me a crack at the majors ... we would see I told myself drowsily,” Robinson recalled.

To deal with his insomnia, Robinson pretended he was a kid back in Pasadena who was unable to sleep on Christmas Eve, not knowing what was waiting for him under the tree the next morning.

“I was thinking,” explained Robinson, “I was 26 years old and I had a dream, but I was afraid to take it out and examine it. Soon ... soon I would know.”

Soon Robinson sat down with Rickey, and found out he was serious about signing Robinson and making him the first black player in 1947. The Red Sox would become the last team in Major League Baseball to integrate, waiting until 1959. (Fair to note the Yankees waited until 1955 themselves).

But the postscript is that around the time the Red Sox ended their long drought and won the World Series in 2004, they sought to make some amends. Owner John Henry (no relation), who had only taken over the team in 2001, led the effort to posthumously award Robinson the Congressional Gold Medal.

I was covering Congress. When I interviewed the team’s CEO at the time, Larry Lucchino, I felt the need to half-jokingly disclose to him that I was a Yankees fan.

“Oh the Evil Empire!” Lucchino good-naturedly jabbed at me.

Then Lucchino grew serious as I asked him about the fake tryout Robinson got so many years ago. He said bluntly that when they landed the franchise, they knew they were getting, “a lot of wonderful things, the beloved ballpark, the great history and legacy of the Red Sox, but we knew we were also acquiring a team that had a checkered history with respect to race relations.”

Lucchino added the Sox knew they were blessed. “So many things are bestowed on a baseball team,” he said. “We have a responsibility to do something positive with that recognition, with that notoriety, and it seemed to me that it was long overdue.”

Even a Yankees fan can tip his cap at a classy Red Sox move like that, honoring the most courageous man to ever play the National Pastime.