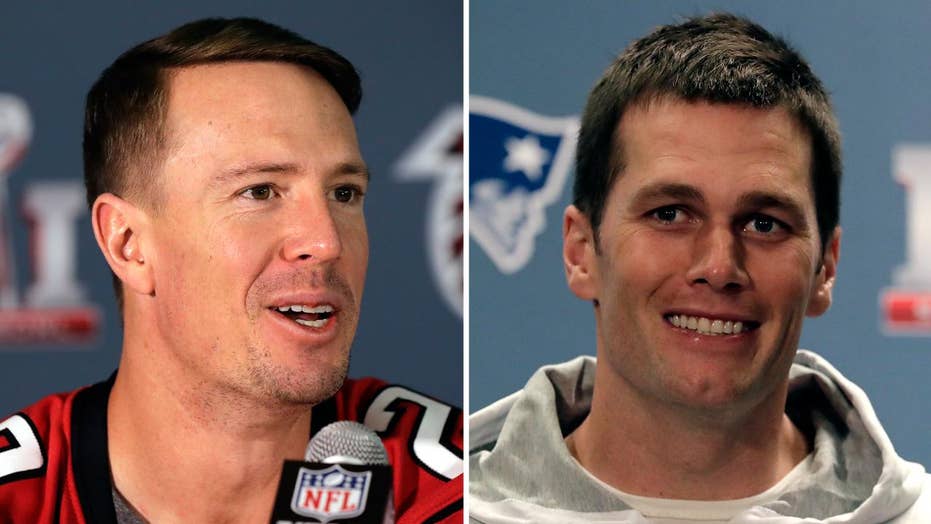 Tom Brady vs. Matt Ryan: Who's under more pressure?

Football, supposedly the ultimate physical game, is in fact almost entirely mental. This is why New England Patriots tight end Rob Gronkowski, who is injured and can’t play in Super Bowl LI on Sunday, can still inspire his team by dressing as a caveman and performing the first ever “prehistoric” high-five and spike in a T-Mobile commercial.

But even more significant than Gronk’s physical absence but looming mental presence on Sunday will be the overpowering mind control of his teammate, Tom Brady.

The legendary quarterback, despite his aging physique, will try to win the NFL championship at age 39, just as Peyton Manning did last year. In fact, Brady is the odds-on favorite to do so.

Does physical age no longer matter?

Remember when John Elway, at age 38, led the Denver Broncos over the Atlanta Falcons to win his second straight Super Bowl in early 1999? How was he able to complete 18 of 29 passes in that game, including an 80-yard touchdown pass?

How was Peyton Manning, at age 39, able to overcome spinal surgery to win the ultimate goodbye game for the Broncos last year? And why is the 39-year-old Brady favored to overcome the loss of his treasured tight end to defeat the Atlanta Falcons and win his fifth Super Bowl ring on Sunday?

The answer is conditioning, experience and, above all, mind over matter.

Brady has a fervent commitment to his diet. He avoids nightshade vegetables (peppers, eggplants, tomatoes), which can cause inflammation. I believe, as many physicians do, that the capsaicin, anti-oxidants and phytochemicals in peppers are actually good for health, as are the lycopenes in tomatoes, but I am very impressed that 80 percent of Brady’s diet is reportedly organic vegetables and whole grains, and that the rest is fish, which contains omega 3, and lean meats.

I believe these “brain” foods help Brady focus and succeed. David Blaine, the endurance artist who held his breath underwater for over 17 minutes on "Oprah," used a nutrition program of “wholesome, energy-driving, fat-burning energy” that was developed for professional cyclists. “Food is my medicine,” Blaine told me in an interview, “I look for nutritional impact, the exact nutrition I need to do the job.”

Brady has the same approach. He seems likely to win, no matter who his receivers are and despite the Falcons’ formidable defense (including Pro Bowler Vic Beasley Jr. and veteran defensive end Dwight Freeney). And don’t get me wrong; the Falcons also have Pro Bowl quarterback Matt Ryan and a great offense. They will most likely put up an incredible fight.

But in the end, my medical prediction comes down to the deep primitive center of the brain, where stress hormones and emotional memory predominate and late-game charges are fueled by fight or flight.

Brady has overcome the humiliation of “Deflategate” and his mother’s health issues to fight another day. History and human courage predict that he will prevail, as Elway and Manning did before him.

As the poet Dylan Thomas famously wrote, “Do not go gentle into that good night, Old age should burn and rave at close of day; Rage, rage against the dying of the light.”