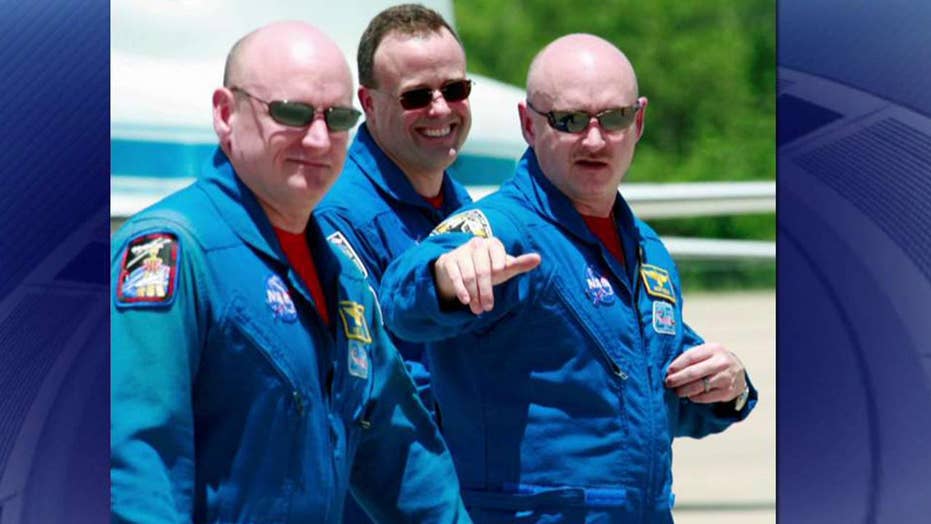 Only about 32 of every 1,000 people are twins, and only about a third of twins are identical. And much rarer still: two identical twins who were both American astronauts. Mark and Scott Kelly hold that distinction, and what doctors learned by studying the pair could have an impact on you and me and how we live our lives.

NASA carried out an unprecedented study on the identical twins for 340 days in 2015 and 2016. Because the two have essentially identical genes, they were perfect subjects for a controlled experiment to see how a person responds to a long spaceflight – the kind that will be needed when NASA is planning to send astronauts to Mars in the 2030s on roundtrip journeys that could take more than two years.

Scott Kelly was monitored on the International Space Station for nearly a year, where he was subjected to the effects of weightlessness, isolation, radiation, and oxidative stress. The engines of his body’s cells (mitochondria) were forced to metabolize oxygen under extreme circumstances.

Mark Kelly stayed on Earth and was monitored in the same ways. The identical twin brothers received bone scans and ultrasounds, got flu shots, and provided urine, blood and saliva samples so doctors and scientists could see how the physical condition of Scott in space differed from the condition of Mark on Earth.

Ten groups of researchers have been studying the results and recently discussed their preliminary findings.

The NASA Twins Study found that Scott’s body showed signs of inflammation, a hyperactive immune system, fluid shifts, stress to his bones, a change in the bacteria in his gut, and changes in his system for blood clotting.

Telomeres are proteins at the end of chromosomes that shorten as we age. Scott’s telomeres lengthened during his time on the Space Station, possibly indicating an effective survival mechanism and the impact of exercise and restricted caloric intake while he was in space. But his telomeres shortened within two days after landing to nearly pre-flight levels, indicating that the effects of being in space weren’t long-lasting

When the genes of the cells are damaged, DNA repair proteins work at fixing them. Despite these repairs, Scott ended up with 7 percent of his genetic expression altered.

This is not to say that the structure of Scott’s genes or their sequence were altered, but rather that there was a change in what was turned on or off and how genes affected body chemistry. These so-called “space genes” will continue to be studied, but there is absolutely no reason to believe that genetic expression was altered for the better.

And herein lies the message for the rest of us. Stress and going into hyper-drive or survival mode may be beneficial in the short term for our ability to complete a task or endure an assault. But this kinds of stress carries longer term risks to our health.

This isn’t the first time science has studied the impact of genetics by utilizing identical twins. A landmark 1979 University of Minnesota study looked at 81 pairs of earthbound identical twins   over 20 years. This led to 170 individual studies that were able to draw conclusions about the significant role that genetics plays in both physical and psychological wellbeing.

And this also isn’t the first time that the effects of outer space on the human body have been studied in ways that have tangible application for the rest of us.

A 2016 study published in the prestigious journal Nature found that Apollo astronauts had a four to five times greater rate of death from heart disease than did non-flight and lower Earth orbit astronauts. The increased risk was likely due to the effects of radiation on the inside of arteries. This is a warning to those of us who encounter excess radiation in our daily lives.

The Apollo missions have also advanced health care in other more positive ways. Implantable heart monitors used during the missions have led to today’s implantable defibrillators.

And digital process imaging that was invented to look more closely at the moon ultimately led to the development of two important medical screening tools.

CT (computed tomography) scanning uses special X-ray equipment to detect certain diseases and medical conditions. An MRI (magnetic resonance imaging) uses a magnetic field, radio waves and a computer to produce pictures of the inside of a person’s body.

Discoveries weren’t limited to medical tools and technology. Freeze-dried food was first tried on board an Apollo mission.

Fast forward to today, when for the first time a valuable genetic study on identical twin astronauts is being combined with the impact of Scott Kelly’s long journey in space.

The results are very important. Now former astronauts, Scott and Mark Kelly have helped teach us not just about protecting human health when traveling to Mars, but also about the best way to live here at home.

Regular diet and sleep, along with exercise and as little exposure to radiation as possible, will keep our telomeres longer, our immune systems functioning at their best, and our genes more or less expressing the way they were meant to do.

Follow that advice and you’ll have a better chance to “live long and prosper,” as “Star Trek” character and very long-distance space traveler Mr. Spock (played by Leonard Nimoy) used to say on the classic TV show.