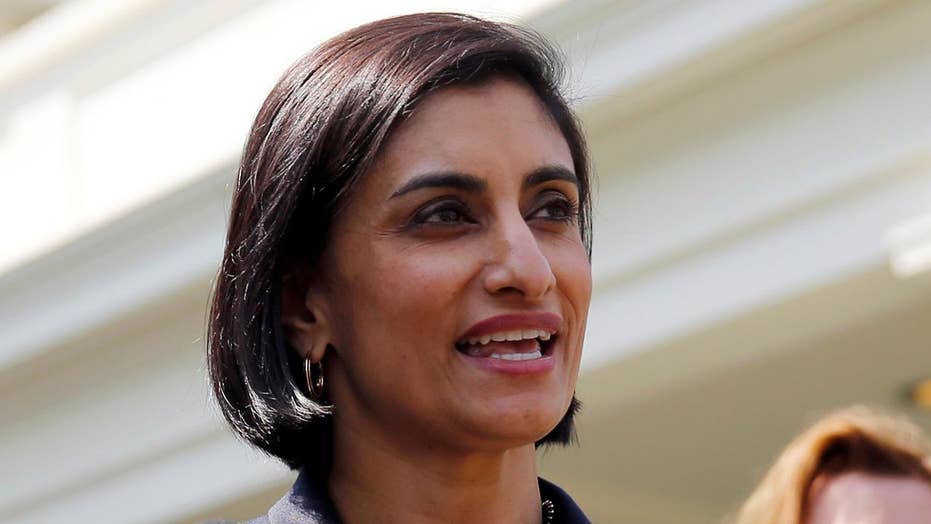 The president is “not afraid of special interests,” Verma said.

Verma emphasized the importance of drug innovation and said that the pharmaceutical industry has done a fantastic job with bringing lifesaving treatments that have made folks healthier.

“But innovation doesn’t mean anything if folks can’t afford their medications,” Verma said.

Appointed to head the Centers for Medicare and Medicaid Services in March 2017, Verma has a long history in the health policy world – most notably as an adviser to Indiana Governors Mitch Daniels and Mike Pence (now vice president) as the architect for Medicaid reform in their state.

Verma is working with Food and Drug Administration Commissioner Scott Gottlieb and their boss, Health and Human Services Secretary Alex Azar, as a capable cadre charged with putting teeth into the president’s drug price-lowering project.

A big step in this direction is a reform to what is known as the drug dashboard, a tool to allow Medicare and Medicaid patients to know the cost of their prescription drugs.

“The drug dashboard is a transparency tool,” Verma told me. “It's an opportunity for patients and the public to see what's going on with drug prices. We've gone from having 70 drugs on that dashboard to now we have 3,000 drugs. You can see the price increases year over year from 2012 to 2016 and you can see which manufacturers.”

Now someone insured by Medicare or a disabled or impoverished person can finally get to see the yearly list price increases for almost every drug that he or she is taking. Basic drugs that treat diabetes and high cholesterol showed large price increases in 2016. Zyrtec, a common allergy medication, increased in price almost 20 percent as did Enbrel, an important arthritis and psoriasis medicine.

In 2016, Enbrel cost a whopping $2,741 per patient every month – almost $33,000 per year before insurance payments. A friend of mine who has taken weekly injections of Enbrel for more than a decade for psoriatic arthritis was disturbed by the big increase in price when he reached 65 and changed from private insurance to Medicare Part D. His out-of-pocket cost for Enbrel last year under Medicare was just over $5,500.

What to do? Of course, knowing the list prices and which manufacturers are price-gouging is only the first step. If middle managers step in and negotiate the prices down for you, they have historically kept the profits to themselves and passed the rest of the cost on to consumers.

Verma told me that the Centers for Medicare and Medicaid Services are beginning to change all that. She said that last year the centers made some essential changes to their hospital program.

“The hospitals were getting discounts and they essentially were not passing these discounts to seniors,” Verma said. “So we changed the rules and this year alone, our seniors are going to be saving $320 million.”

Verma said that CMS is hiring negotiators to strengthen its negotiating power and increase competition to lower prices for seniors.

Over at the Food and Drug Administration, Commissioner Gottlieb is complementing this work by approving more generic drugs and biosimilars rather than making generic drug manufacturers redo expensive research that the brand-name drug companies performed initially. This leads to cheaper options, which also bring down prices through competition.

When President Trump released his prescription drug price lowering proposal, House Minority Leader Nancy Pelosi, D-Calif., immediately attacked it, saying in a statement: “The President’s proposals are yet another giveaway to Big Pharma, and do nothing to hold wealthy drug companies accountable for their unconscionable price gouging.”

It would seem that Pelosi is wrong, as Verma, Gottlieb and Secretary Azar are proving. The path is simple and straightforward. Our seniors and our poor and disabled are our must vulnerable populations. They are the right place to start.

First, patients need to know what drugs are costing, and whether or not they are paying for them directly. Next, these costs need to be negotiated down with the introduction of more competition or choice. Finally, the government is correct to forcibly decrease the amount seniors have to pay out of pocket and stop the middle managers from gouging them.

Seema Verma is helping to put flesh on the bones of what she calls President Trump’s “bold” initiative. We should applaud her efforts.