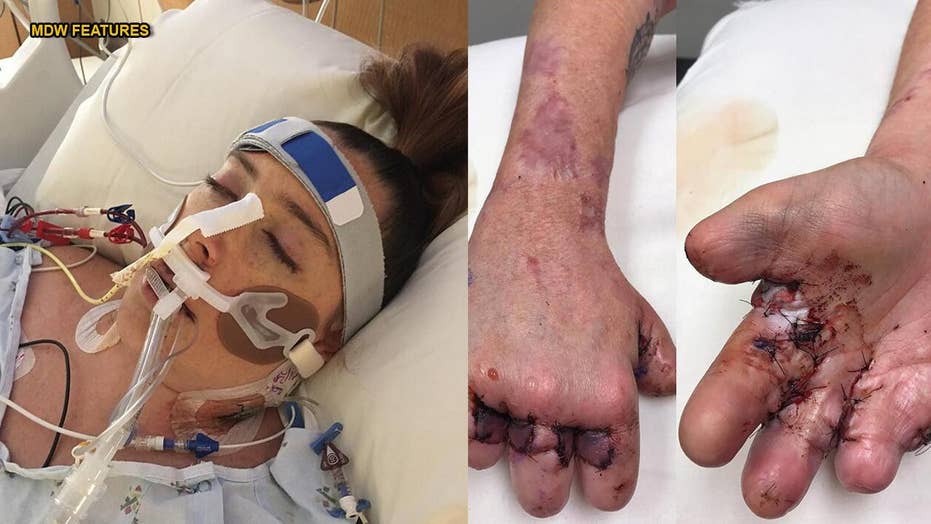 &nbsp;Rachael Acuff, who first went to the hospital in June 2018 after noticing blood in her urine, is doing her best to adjust to life after her 10 toes and right hand were amputated to stop a deadly infection caused by sepsis.The Missouri mother says she has grown closer to God and stronger in her faith.

Sepsis is a medical emergency that must be treated just as aggressively as a heart attack or a stroke. It is an overwhelming response to infection that turns the body’s immune system against itself, and as we’ve seen in stories that have made global headlines, it can lead to tissue damage, severe organ failure, even death. There are approximately 1.5 million cases in the U.S. each year.

How can you protect yourself and your loved ones from this horrifying illness? Knowing the symptoms is a vital first step. And yet, a recent survey found that only 12 percent of adults can identify sepsis symptoms – even as the risk of dying from it increases by up to 8 percent every hour it goes undiagnosed.

The Sepsis Alliance uses TIME as an acronym to help identify the warning signs:

Temperature – Higher or lower than normal

Infection – May have signs and symptoms of infection

Septic shock can occur when the body is no longer able to maintain an adequate blood flow to supply oxygen to vital organs.

Each year, sepsis is responsible for the death of approximately 270,000 Americans – making it more deadly than breast cancer, prostate cancer and AIDS combined. The very young, the elderly and people with chronic illness or impaired immune systems are at greatest risk, but the syndrome can occur in healthy individuals as well. In all cases, early recognition and aggressive treatment are essential to survival.

For instance, at HCA Healthcare, we are now using computer algorithms to detect sepsis up to 18 hours earlier than even the best clinicians would be able to, using a technology called SPOT (Sepsis Prediction and Optimization of Therapy).

Powered by artificial intelligence and analysis of data points from millions of previous hospitalizations, SPOT recognizes combinations of data that indicate onset of sepsis. It continuously monitors vital signs, lab results, nursing reports and other patient data. And when patterns consistent with sepsis occur, SPOT alerts clinicians to evaluate patients and, as appropriate, begin treatment immediately.

Since our introduction of SPOT technology in 2018, it has been used to monitor more than 2.5 million patients across 164 hospitals. It is our most powerful tool in the battle against sepsis, and along with evidence-based clinical interventions, has helped us save an estimated 8,000 lives over the last five years.

Remember, sepsis is a medical emergency, and must be treated as aggressively as a heart attack or stroke.

Now, thanks to the powerful combination of electronic health records and artificial intelligence, technology like SPOT is able to do just that. That’s a win for health care – but more importantly, it’s a win for every patient who lives to see a new year, celebrate an anniversary or welcome a child into the world.

Simply put, that’s why I went into medicine.

To learn more about the symptoms, diagnosis and treatment of sepsis, please visit the Sepsis Alliance.

Dr. Jonathan Perlin is president of clinical services and chief medical officer at HCA Healthcare, the nation’s leading provider of healthcare services. He provides clinical operations leadership for HCA Healthcare’s 185 hospitals and approximately 2,000 sites of care in 21 states and the United Kingdom.