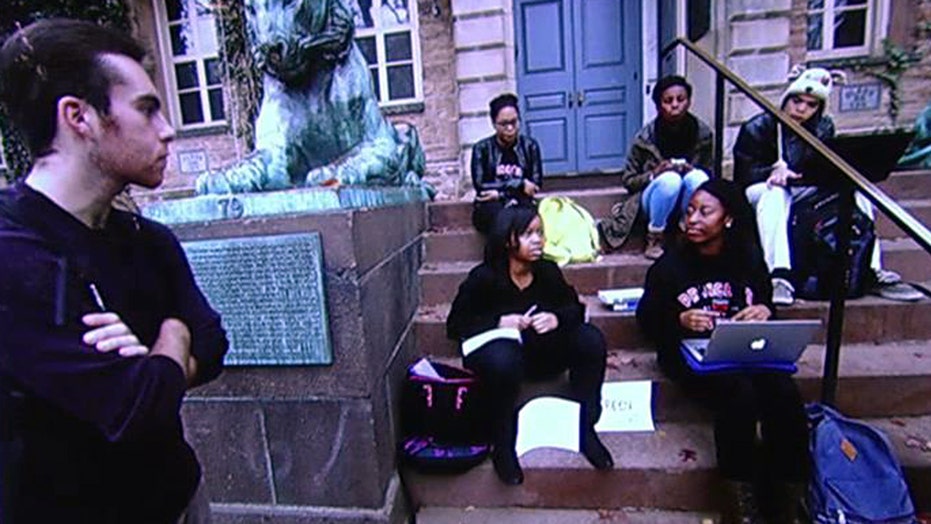 In a month when Western Civilization has come under renewed attack from jihadists, that other bastion of opposition to the economic and political freedom the West embodies has gone haywire: college campuses.  While it’s tempting to blame precious students who are demanding safe zones and freedom from unwelcome ideas, the real culprits are wimpy college administrators.

The latest chapter of political-correctness lunacy comes from Princeton’s campus, where a group of students staged an illegal sit-in at the offices of university president Eisgruber.  The students were outraged that the man who ran Princeton before becoming our 28th president in 1913, Woodrow Wilson, was unable to see a century into the future during his life and comply with our contemporary racial sensibilities.  Despite a tenure that made him commander-in-chief during World War I and which fundamentally changed America’s role in the world, aggrieved students now demand safety from buildings and murals bearing Wilson’s name.

Princeton’s Black Justice League also wants a space on campus for “cultural affinity” groups and and a diversity and “cultural competency” training program.(Incidentally, China had a nationwide version of this beginning in 1966.)

Rather than having the trespassing students arrested and expelled, Eisgruber validated their tactics, signing an agreement that could lead to airbrushing Wilson, and which provided amnesty for the law-breaking students.

This is par for course in a year when college administrators have caved in to a loud minority of perpetually aggrieved students.  In the past month, kids at Yale made headlines for demanding administrators make them safe from potentially insensitive Halloween costumes and an email that dared suggest independent thought.  Instead of standing up for free expression and telling students to buck up, Yale’s president, Peter Salovey, gushed to protesters: “We failed you.  I think we have to be a better university. I think we have to do a better job.”

At the University of Missouri, students protested a lack of handholding after alleged racial incidents.  Ultimately, the school’s president was forced out.  In each of these cases, administrators indulged out-of-line students who should have been rebuked.

Administrators aren’t just kowtowing to fringe students in assaulting free speech and political rights, they’re also attacking economic freedom.  A case in point is the University of California at San Diego, which hosts a Marxist collective that can’t pay its bills.

The Che Cafe—named after communist Che Guevara--has graced its location on Scholars Drive at UCSD since 1980, when the self-styled “collective” began operating the music venue.  Its web site promises that, “Working in our co-op/workers’ collective, and learning to cooperate with others in a non-hierarchical setting can be a very valuable experience.”

Other helpful advice includes: “If you do not wish to be shoved by the mosh, do not stand in or next to the mosh.”  Words to live by.

But what about that mosh known as the real world, for which college is supposed to prepare students?  It can be tough out there, with things like laws and bills.  The Che has been brought to the brink of ruin not only by its pay-whatever’s-cool revenue model—a unique idea they oddly never taught us in business school—but also by a demand that it comply with health and fire regulations, including by installing costly sprinklers and alarms that do nothing at all for the radical-chic vibe.

The Che would very much like to keep bumming subsidies from UCSD—effectively seeking a bailout of about $700,000 from taxpayer funds and tuition.  In a moment of sanity, UCSD moved to evict the collective.  In true California style, the matter is now tied up in court.

Don’t blame PC-crazed kids.  It was actually a student-run committee that voted to cut funding for the Che. One of many reasons was a survey that revealed 83% of UCSD students never go to the place.

Nonetheless, even before a ruling from the court, UCSD has indicated it will back down.  In so doing, administrators would join the morally challenged presidents of Yale and Princeton.

At all of these colleges, PC thugs represent just a tiny minority; the vast majority of American students want to use college as a foundation for success and a good life, not a career of indulging grievances.  The real culprits are weak administrators who, rather than pander to the bottom 5% of future alumni, ought to stand up for the political and economic freedom that made America great—and which are crucial to critical reasoning and the attainment of knowledge.

No one expects students not to do stupid things on occasion, like hanging out at a collective or thinking they’re oppressed by a building named by someone who wasn’t culturally sensitive by standards a century after his death.  But it’s time for college administrators to start reflecting the values and judgment of parents and taxpayers who foot the bill for college—and for that matter the silent majority of students who want to learn to succeed in the great nation that pioneered political and economic freedom.