'The collusion delusion is over,' President Trump tells a fired up crowd of supporters in Grand Rapids, Michigan; Ellison Barber reports.

Basically, “Shut up, listen, trust your instincts, and then go viral.”

While certain liberals and socialists believe they can buy elections with the “Free” carrot mirage, all honest Democrats know that much like the “Russia collusion” hoax, that strategy is doomed to failure.

DOUGLAS MACKINNON: BEING FAR-LEFT, LIBERAL, OR A DEMOCRAT, MEANS YOU NEVER HAVE TO APOLOGIZE FOR ANYTHING

During a campaign or business venture, the odds for success increase dramatically when negative emotion, bias and ego are removed from the equation.

Something most in the mainstream media, entertainment, academia, the Democratic Party, and the “Never-Trumpers” failed to accomplish during the 2016 presidential campaign.

Because Donald J. Trump was at the other end of that equation, they continually proved themselves biased, hyper-emotional, unprofessional, unethical, and continually wrong in their predictions. 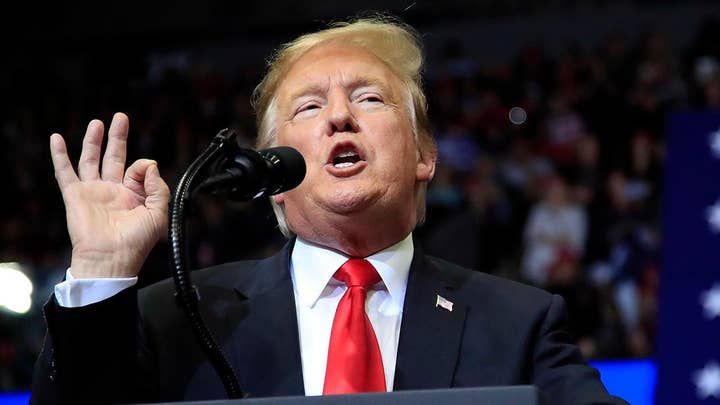 To their increasingly unhinged dismay, from the moment Trump announced his candidacy in June of 2015, he became better and better at not only listening to the American people, but hearing their fears, and then getting his answers directly to them.

The “Canary in the coal mine” proof of that for me coming about one year before the election. I got a call from a very liberal friend of mine from Massachusetts saying, “You know, this Trump guy is starting to make sense to me.” That same week, I received the exact message from a very conservative friend in Florida. What did my liberal and conservative friends have in common? Both felt their respective political parties had long since given up on them, only cared about themselves and the elites, and that with candidate Trump, someone finally got that.

Years ago, a highly respected political elder told me, “The only job of a vice-presidential candidate is to win his or her home state. Anything beyond that, is gravy.”

In 2000, Gore running-mate Senator Joe Lieberman held up his end of that bargain by winning his home state of Connecticut. Quite humiliatingly, Al Gore fell flat on his face.  Not only did he lose his home state of Tennessee, but President Clinton’s home state of Arkansas as well.

Are you kidding me? Had Gore won either, he would have been the next President of the United States.

Purely because of ego and inner-demon reasons, Gore chose not to let President Bill Clinton – only one of the best retail-charismatic-politicians ever – campaign for him in Tennessee and Arkansas during the last ten days of the election.

In 2008, soon after Hillary Clinton lost the Democratic primary to all-but-unknown Barack Obama, a liberal friend told me she lost because, “She felt herself too regal and privileged to sweat the small stuff.”

By “small stuff,” he meant the smaller states and caucuses in the Democratic primary. Places Obama’s team targeted with a vengeance as they fought for every single delegate.

Come 2016, we were introduced to the “new and improved” Hillary Clinton. One who would not let her negative ego trip her up again. Except…it did.

Not only did she never feel the need to sully herself by campaigning in Wisconsin – Senator Amy Klobuchar, D-Minn., recently taking a dig at her for that blunder -- but decided that publicly consigning coal miners and their families to poverty while defining millions of Americans as “deplorables” was somehow a winning campaign strategy.

Donald J. Trump – almost entirely on his own – shattered the mold for a “conventional wisdom” presidential victory. He did so in large part by not only actually listening to the voters but trusting his instincts once armed with their feedback, then circumventing the liberal and entrenched Republican blockade to get his messages directly to the people.

Something he will repeat in 2020 when he wins by at least four points.

While the fairytale of socialism is still fooling some, most Americans are sick of being played by politicians, the media and the elites. They are desperate for those bases of power to shut up and listen to them for a change.

Most not only want to hear the truth but can handle it.

Understanding that and then successfully bypassing the biased media and special interest barriers to actually speak with those Americans will be a winning formula.

Douglas MacKinnon is a former White House and Pentagon official and the author of several books.  His latest is "The 56: Liberty Lessons From Those Who Risked All to Sign The Declaration of Independence." (Post Hill Press, June 10, 2022).