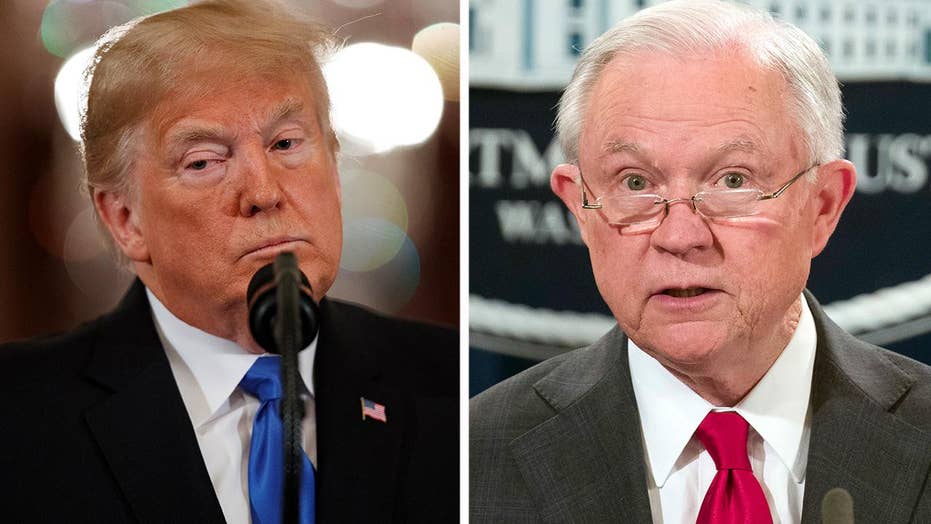 President Trump says he looks forward to working with the Democrats and even said he would prefer to adopt a softer tone with the media. John Roberts reports for 'Special Report.'

Less than 24 hours after polls closed in Tuesday’s midterm elections, when he no longer had to fear short-term political damage, President Trump formally asked for and received Attorney General Jeff Sessions’ resignation.

It is abundantly clear that President Trump has had this move on the backburner for several months, and was just waiting to get past the midterms before ousting Sessions as head of the Justice Department.

The president has made no secret of his anger at Sessions’ decision to recuse himself from overseeing Special Counsel Robert Mueller’s investigation of Russian interference in the 2016 presidential election and possible collusion between Russia and the Trump campaign to help Trump become president.

MIDTERM ELECTIONS: DEMOCRATS, IT WOULD BE A CATACLYSMIC ERROR TO MAKE PELOSI YOUR NEXT HOUSE SPEAKER

Opportunely for the president, Whitaker has argued that Mueller's investigation has come “dangerously close to crossing” supposed red lines as it seeks to determine any and all potential links between the Trump campaign and the Kremlin.

In an op-ed he wrote for CNN last year, Whittaker said Mueller’s investigation should not examine the financial affairs of the Trump family – a position the president holds.

Whittaker wrote in the op-ed: “It does not take a lawyer or even a former federal prosecutor like myself to conclude that investigating Donald Trump's finances or his family's finances falls completely outside of the realm of his 2016 campaign and allegations that the campaign coordinated with the Russian government or anyone else. That goes beyond the scope of the appointment of the special counsel.”

Whittaker added: “If he (Mueller) were to continue to investigate the financial relationships without a broadened scope in his appointment, then this would raise serious concerns that the special counsel's investigation was a mere witch hunt.”

The president has repeatedly called the Muller investigation “a witch hunt.” Because Whittaker has echoed the key criticisms Trump has made of the Mueller probe, he is the wrong person to now oversee the investigation.

Ultimately, with an informative, detailed report from the special counsel’s office on the verge of being released, having an acting attorney general who takes an arguably slanted stance on the matter has the potential to lead to a constitutional crisis of unprecedented proportions.

The forced resignation of Sessions certainly plays into the narrative of President Trump being willing to obstruct justice and systematically shut down the Mueller investigation in the coming months – before Mueller’s final report is completed.

This narrative gains added credibility because the president has frequently expressed disdain and anger over Sessions’ recusal from overseeing the Mueller probe, despite Sessions’ obvious conflict of interest in the matter. As a senator, Sessions was a strong supporter of the Trump presidential campaign and was involved in promoting the Trump candidacy.

Given that the Mueller report remains pending – and in consideration of the president’s success in Senate races nationwide in Tuesday’s midterm elections – now is not the time to remove an effective and loyal Cabinet member who has frequently done the difficult work of selling the Trump administration’s hard stances on criminal justice, illegal drugs and immigration.

I am concerned about the political dynamics at play in President Trump’s decision to fire Sessions. And taking a step back from the “inside baseball” of Cabinet firings and new appointments, I also believe this decision fundamentally hurts the interests of the American people.

We still need answers to the very serious questions about the Trump administration that the Mueller probe has continued to diligently investigate with integrity and a significant degree of success.

President Trump has repeatedly refused to admit that there was Russian interference in the election that made him president, despite confirmation of Russia’s meddling by all U.S. intelligence agencies.

In addition, since the president has made repeated attempts to discredit the Mueller investigation, his firing of Sessions and appointment of Whittaker is certainly concerning and raises questions about potential obstruction of justice.

Indeed, the indictments and convictions from the Mueller investigation over the past few months make it clear that Russia interfered in the 2016 presidential election – specifically to hurt Democrats and to help Donald Trump become President Trump.

And intelligence agencies have said that Russia continued to make attempts to interfere in the midterm elections held across our country Tuesday, waging an information war against American voters during the election campaign.

I firmly believe that Mueller – and the FBI by extension – should be thoroughly investigating all possible events of coordination and collusion by the Trump campaign with Russia, and should be able to do so without interference by the president.

Ultimately, the American people deserve answers, and the president must, for the good of the nation, not continue to stifle this investigation more than it appears he already has done.