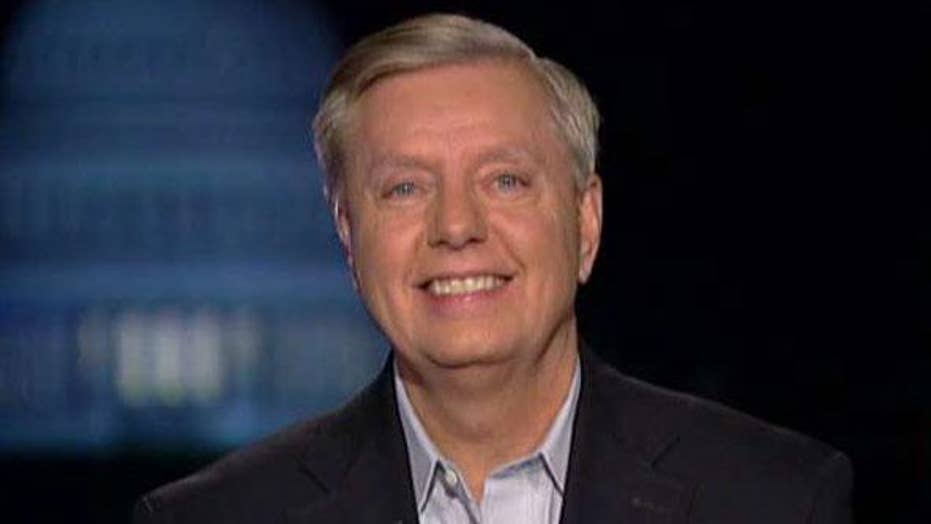 Sen. Graham: We're not going to give in on getting funding for the border wall

Republican says that even though the GOP lost the House in 2018, the issue of securing the border is 'alive and well.'

President Trump has made it clear that he believes our country is better off entering a partial government shutdown than forging a compromise on necessary immigration reform or passing a continuing resolution to fund federal agencies.

The president is demanding $5 billion in funding for a wall along our border with Mexico, saying he will refuse to sign a government funding bill that doesn’t include that money.

However, the shutdown of federal agencies that employ about 400,000 people that began Saturday morning was not necessary. Both the House of Representatives and the Senate had come to a bipartisan resolution to keep the government open until February – but then President Trump changed his mind.

DOUG SCHOEN: TRUMP BETTER GET OUR TRADE POLICY RIGHT, OR CHINA WILL TAKE OUR PLACE AS THE GLOBAL ECONOMIC LEADER

Once the Senate failed to pass the House bill and left town Saturday, it was clear the shutdown will continue at least until the Senate goes back into session Thursday. It could easily go on longer.

With senators already on their way home for the holidays, President Trump may have thought that his last-minute decision to demand $5 billion in wall funding as part of the deal to keep all federal agencies open would have forced senators to accept the deal.

However, those like Sen. Susan Collins, R-Maine, were seen disembarking from planes headed for their home states in order to go back to the Capitol to return to work.

The president’s strategy to shut down the government for the sake of a border wall only days before the Democrats assume majority control of the House is foolish and wrong.

Indeed, given the ill-advised macroeconomic decisions of the Trump administration since November, President Trump is now experiencing his worst month this year.

As the stock market enter a bear market, we are seeing more and more signs of a recession on the horizon with growth stagnating, wages remaining the same, and a rudderless trade policy in the face of rising tensions with China.

Not only that, the announcement Thursday of Defense Secretary James Mattis’ decision to resign is the third departure of a high-ranking Trump administration official in just two weeks. Adding more insult to injury was Mattis’ resignation letter, which directly criticized the Trump administration’s deteriorating relationship with allies.

Mattis emphasized in his letter: “My views on treating allies with respect and also being clear-eyed about both malign actors and strategic competitors are strongly held.”

Following President Trump’s decision to withdraw from Syria – a move that Russian President Vladimir Putin supported and welcomed – it was clear that Mattis had enough.

Additionally, on the heels of historic Democratic wins in the midterm elections, the president did indeed squander the gains he made in the Senate.

The president’s strategy to shut down the government for the sake of a border wall only days before the Democrats assume majority control of the House is foolish and wrong.

President Trump told the Democratic leaders he would take full responsibility if the government were to shut down – and now he has it.

Yet the president is attempting to blame the Democrats for this shutdown, even though he is the one who changed his mind at the last minute is refusing to budge from his demand for $5 billion for his border wall.

And while the government shutdown is not a good thing, it does necessitate an important debate over the main issue at hand: border security.

I say this because unlike many other Democrats I do believe and indeed support strong border security utilizing modern technologies, which would in many places replace a wall.

Indeed, the president’s success and re-election prospects depend fully on his ability to drive compromise on his key issues like immigration, as well as health care. These are two key issues that were fundamental to the Democrats successfully winning back the House in November.

House and Senate Democrats were willing to compromise to find a deal that would keep the government open and secure our borders.

Mr. President, you should take their deal.