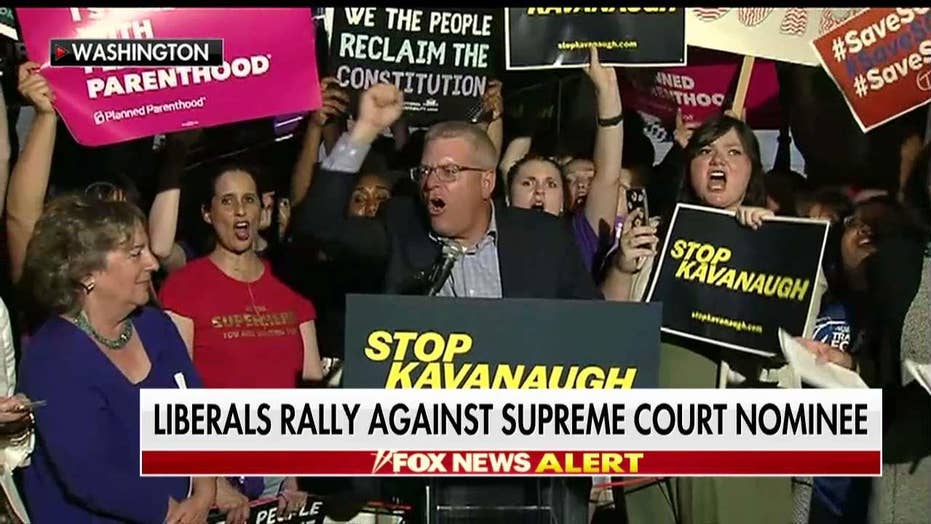 Within hours of the announcement, protestors arrived at the steps of the Supreme Court building in Washington, D.C., to protest the new nominee.

Democrats across the country, particularly those in traditionally red states, are facing what Senator Lindsey Graham, R-S.C., has called a “nightmare decision.”

Here is the tough decision those red state Democrats have to make: Either go along with the rest of the Democratic party to oppose the nominee and risk losing their own upcoming election, or support Kavanaugh and leave the Democrats short of the votes they may need.

Kavanaugh is perceived by many analysts to be less staunchly conservative than other judges on President Trump’s short list. Yet, on issues such as gun control and religious liberty, Kavanaugh would very likely side with the more conservative justices on the Court.

This dichotomy is what leaves Democrats running for reelection in red states with the tough choice.

Given that the Democratic party is already fractured and in a state of chaos, Democratic senators aren’t necessarily bound by one single ideology. For this reason, I expect many of them to vote in favor of the Republican nominee.

Now more than ever, Democrats must recognize that although we are in an age of political polarization, voting across party lines might actually benefit the party itself.

Moreover, Kavanaugh has made it clear he will follow precedent on prior Supreme Court rulings. When Senator Chuck Schumer, D-N.Y., asked about his views on Roe v. Wade during his 2006 D.C. Circuit confirmation hearing, Kavanaugh responded, “if confirmed to the D.C. Circuit, I would follow Roe v. Wade faithfully and fully. That would be binding precedent of the court. It's been decided by the Supreme Court. ... I'm saying if I were confirmed to the D.C. Circuit, senator, I would follow it. It's been reaffirmed many times."

His affirmation of following precedent perhaps makes red state Democrats view him as less dangerous to the party’s platform, and therefore easier to justify confirming to their Democratic base.

His support of legal precedent provides Democrats with some hope that he may support gay rights, abortion rights, and other liberal causes.

For these red state Democrats, confirming Kavanaugh could even garner them some Republican-leaning votes in their own states.

There is also the possibility, though, that far-left Democrats from deep blue states would condemn those senators who vote to confirm Kavanaugh, leading to an even greater divide within the Democratic party.

If Democrats stand firm on opposing any Trump nominee, however, they run the risk of losing seats and perhaps even the chance of regaining a majority.

Ultimately, this is a lose-lose situation.

All three are up for re-election in historically red states that Trump won easily. It behooves these three Democrats to once again vote across the aisle for their own sake to keep their Senate seats. Voting against Kavanaugh could very well give their Republican challengers the support they need to vote them out of office.

As an example, during the 2017 Gorsuch confirmation process, Democratic Senator Claire McCaskill of Missouri agonized before ultimately voting against him. Tellingly, her approval rating dropped by the year’s end in a state that President Trump won by a 20-point margin. Her opponent in this year’s election, Josh Hawley, has already released an ad saying McCaskill wants “liberals” on the Supreme Court.

As a Democrat running for reelection in a solid red state, McCaskill does not have the same freedom to oppose Kavanaugh with an election only months away.

The truth is, even if every Democrat votes against Kavanaugh, he will still be confirmed if no Republican votes against him. Democratic votes are more symbolic than necessary.

Which means that red state Democrats should vote to confirm Kavanaugh if they hope to stay in office. This is the only way Democrats maintain the ability to take back Congress.

Now more than ever, Democrats must recognize that although we are in an age of political polarization, voting across party lines might actually benefit the party itself. It is time to get behind Brett Kavanaugh and confirm his nomination to the Supreme Court.