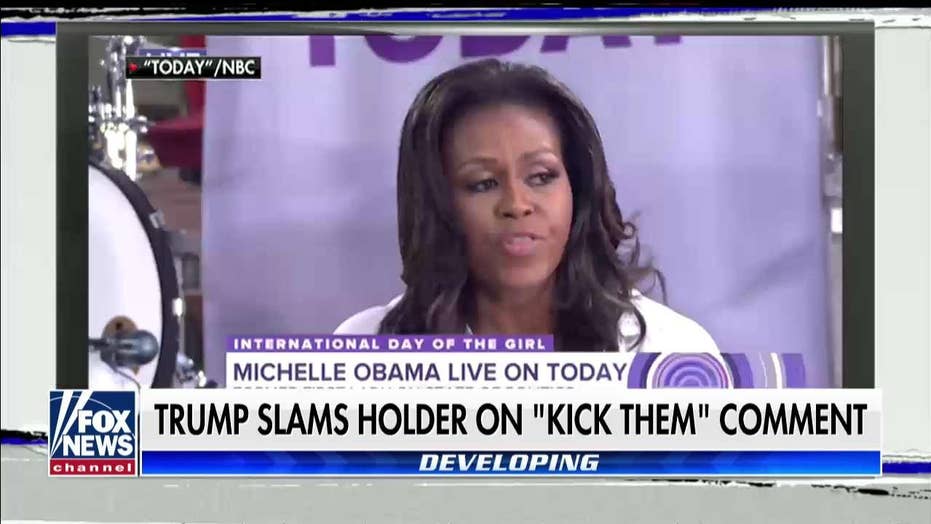 As Democrats campaign for the Nov. 6 midterm elections, they have plenty of legitimate criticisms to level at President Trump and Republicans who control the House and Senate. But Democrats were hurt in recent days by amazing and disgusting comments made by Hillary Clinton and former Attorney General Eric Holder.

As a Democrat, I want my party to win as many seats as possible in the House and Senate and to capture as many governorships and other state offices as it can. But the Clinton and Holder remarks do not advance that effort – they hurt it.

Former Secretary of State and 2016 Democratic presidential nominee Clinton said Tuesday that “you cannot be civil with” the Republican Party because it “wants to destroy what you stand for, what you care about.” She added that “if we are fortunate enough to win back the House and or the Senate, that’s when civility can start again.”

DOUG SCHOEN: IN THE AFTERMATH OF KAVANAUGH’S CONFIRMATION, DEMOCRATS WOULD BE WISE TO MOVE ON

But even worse than Clinton’s comments were those of Eric Holder, who said at a recent campaign event in Georgia that Democrats should abandon the advice of former first lady Michelle Obama, who said at the 2016 Democratic National Convention that her party and mine should respond positively to negative attacks from the GOP.

Mrs. Obama said that “when someone is cruel or acts like a bully, you don’t stoop to their level. No, our motto is, when they go low, we go high.”

Holder argued just the opposite, saying: “When they go low, we kick them. That’s what this new Democratic Party is about.” He later said he wasn’t advocating violence – not literal kicking.

There is no justification for the angry rhetoric of Clinton and Holder, which only feeds into Republican claims that Democrats are an angry mob that can’t get over Clinton’s loss to Trump two years ago.

I beg to differ with both Clinton and Holder.

The only way the Democrats can regain the majority in either or both houses of Congress is by being civil, and pointing out the differences between Democrats and Republicans on the issues.

As a centrist Democrat, the issue that strikes me most is the degree to which the national debt and the deficit are now out of control.

America faces uncertain and unstable times financially. Yet we are seeing a Republican-controlled Congress that has largely failed to do anything besides provide tax cuts for major corporations and the wealthiest individuals. This is by no means certain to have fundamentally altered the path of the economy or to provide economic growth.

Put another way, what the Trump administration has failed to do is to fix health care and cover pre-existing conditions more fundamentally; lead America in a fiscally responsible way; and pass tax cuts that help the average American. The Trump tax cuts have driven up the national debt and endangered funding for programs that benefit millions of people in our country.

Democrats have long argued the need for a centrist agenda that focuses on:

There is no justification for the angry rhetoric of Clinton and Holder, which only feeds into Republican claims that Democrats are an angry mob that can’t get over Clinton’s loss to Trump two years ago.

And Holder looks particularly bad because he was once the chief law enforcement officer of the United States, yet now sounds like he is effectively advocating what appears to be either illegal activities, or metaphorical initiatives that run counter to our traditions and our politics.

Hillary Clinton has said she won’t run for office again, but Holder has said he may run for president in 2020. Whoever the Democratic candidate turns out to be needs to be a responsible and respectable opponent –not one who calls for kicking the GOP or for incivility.

We should have learned from the Senate confirmation hearing for now-Supreme Court Justice Brett Kavanaugh that resisting for the sake of resisting doesn’t work. In fact, Democratic attacks on Kavanaugh may well have backfired, recent polls show.

The Democratic Party itself is lost now, without a message, a direction, a strategy, or agenda to confront a Republican Party that is seen as in many ways as having let the American people down.

We need change – but it must be constructive change. This Democrat believes that the comments that Eric Holder and Hillary Clinton made are wrong, counterproductive, and deserve to be rejected by the leadership of the Democratic Party.

American voters generally don’t support extremists. In 1964, Republican presidential candidate and Arizona Sen. Barry Goldwater famously said “extremism in the defense of liberty is no vice.” He won 52 electoral votes, compared to 486 for Democratic President Lyndon Johnson. While Goldwater was a conservative, Democratic extremists on the left have not and likely will not overcome the reluctance of voters to support one extreme or the other.

To be clear, I am not saying that Democrats are the radical, extremist party that President Trump describes them to be, nor do I believe they are the party of crime. I think that is just plain wrong. And GOP claims that Democrats are a bunch of radicals who will turn America into a failed state like Cuba or Venezuela are ridiculous.

However, the hostile rhetoric of Clinton and Holder goes well beyond what the president and Republicans have been saying. I think it deserves a rebuke from a Democrat to make it clear what is appropriate and what is not.