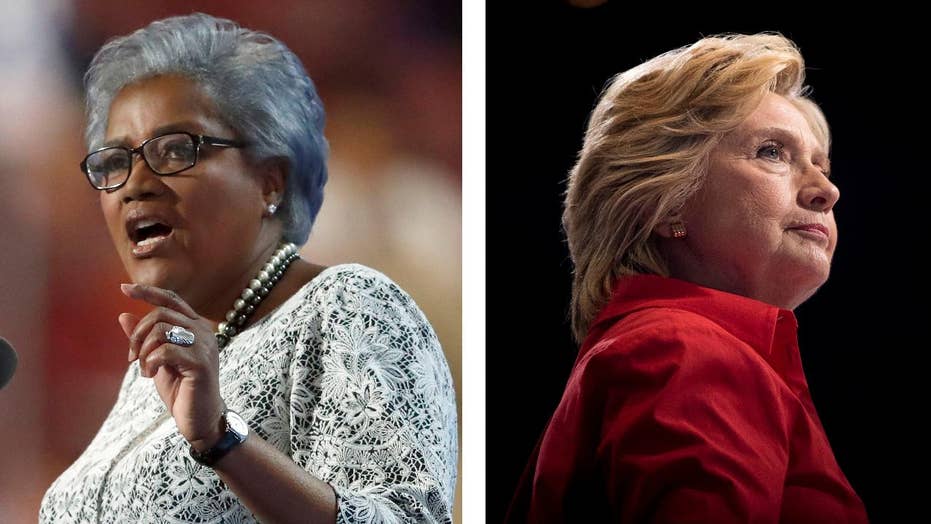 Most Democrats are publicly muting their criticism of Donna Brazile, a longtime party operative whose new tell-all book has shaken Washington with its revelations about how the Hillary Clinton campaign took control of the supposedly neutral Democratic National Committee. But privately, they are furious at Brazile’s charges that Clinton controlled the DNC and tilted the primary playing field to help her defeat Sen. Bernie Sanders of Vermont.

The book – titled “Hacks: The Inside Story of the Break-ins and Breakdown That Put Donald Trump in the White House” – came out Tuesday, but Brazille released excerpts last week and has been giving media interviews.

Brazile, a longtime Clinton ally, was tapped in mid-2016 to lead the embattled DNC after former chair Debbie Wasserman Schultz resigned in July after leaked internal emails showed key members of her staff speaking critically of Bernie Sanders in his primary fight against Clinton.

“I completed my review of the DNC and I did find the cancer,” Brazile said she admitted to Sanders in September 2016. “I explained that the cancer was [Clinton] and [she] had exerted this control of the party long before she became the nominee.”

Sen. Elizabeth Warren of Massachusetts, a leading Democratic progressive, when asked on Thursday if the DNC was rigged to favor Clinton, responded with one word: “yes.”

Rep. Tulsi Gabbard, D-Hawaii, also called the primary “rigged.” She stepped down as a Democratic Party vice chair during the primaries over her frustration with the DNC.

Brazile also said she pondered a move to replace Clinton as the Democratic nominee after the candidate contracted pneumonia, covered up the illness and then collapsed in New York at a 9/11 memorial ceremony.

Robby Mook, the former campaign manager for Clinton, says it is “laughable” that the DNC could have tilted the race to his candidate. He says the controversy should be forgotten.

A group of dozens of other Clinton campaign staffers signed an open letter saying “we do not recognize the campaign she [Brazile] portrays in the book.” The open letter added: “Finally, we are pretty tired of people who were not part of our campaign telling the world what it was like to be on the inside of our campaign and how we felt about it.”

Other staffers are privately depicting Brazile to reporters as “confused” or even “crazy” in telling her story.

Brazile isn’t taking the criticism lying down. She told ABC’s “This Week” on Sunday that her critics “can go to hell.” She added: "I'm going to tell my story. Why am I supposed to be the only person who is unable to tell my story?"

The reason why so many Democrats wish Brazile would shut up is actually quite clear. Democrats traditionally paper over any conflicts in their party, and most media outlets cooperate by downplaying tensions – while eagerly portraying any disagreements inside the GOP as a potential “civil war.”

Democrats worry that if the tensions inside their party break out into the open, their carefully constructed coalition of identity groups – from gays to environmentalists to African-Americans – will fray around the edges.

But this time, silence about internal fights isn’t likely to hold. It’s been a year since Clinton lost the presidential election to Donald Trump in a shocking upset. Clinton continues to blame everyone but herself – from Russia, to Bernie Sanders, to then-FBI Director James Comey – for her loss. So it shouldn’t be surprising that frustrated Democrats are finally returning fire.

“A lot of Democrats believe it’s past time for the party to move on beyond the Clintons, and understanding what happened in the 2016 campaign is part of a necessary conversation,” says Doug Schoen, a former adviser to the Clintons in the 1990s and currently a Fox News contributor.

I’ve known Donna Brazile for nearly 20 years, since she became the first female campaign manager for a major party nominee during Al Gore’s 2000 campaign. I have always found her forthright and a cut above traditional political hacks, who will explain away anything inconvenient in their party.

Democrats should recognize that however painful Brazile’s revelations may be in the short term, sweeping them under the rug will only mean they will reemerge in the 2020 campaign as the party’s progressive and pragmatic factions again fight over will control the party.