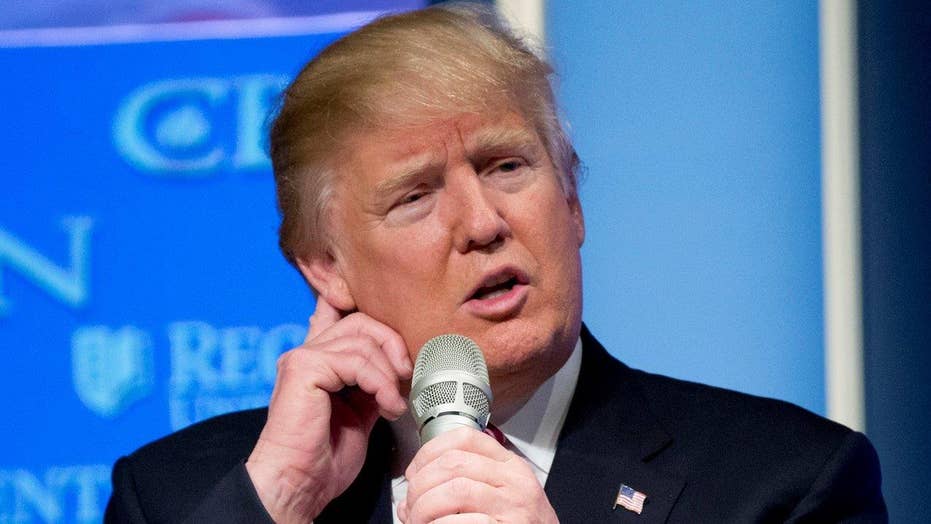 Can Marco Rubio and Ted Cruz stop the business mogul?

Donald Trump might well become the 45th president of the United States. How do you feel about that? Exhilarated? Anxious? Proud?

My guess: many of us feel mischievous, like a kid about to say his first four-letter word in public.

Supporting Trump is risky, unorthodox and could lead to completely unpredictable results.

It’s fun, until you remember that we’re talking about electing a president of the United States of America, arguably the most important job in the world.

Trump-ites would argue, how bad can he be? Look at the other clowns who have occupied the Oval Office. They might have better manners, but they sure have made a hash of the job.

Absolutely true. Still, the overwhelming anxiety is that we don’t know much about what kind of president Donald Trump would make. What kind of man is he? A good man? A bad man? A dolt born with a silver spoon in his mouth who got lucky?

For insight, we naturally turn to Rick Reilly, senior writer for Sports Illustrated. In his book "Who’s your Caddy?" subtitled “Looping for the Great, Near Great and Reprobates of Golf,” Reilly recounts carrying The Donald’s bag around the “preposterously wonderful” Trump National Golf Club in Briarcliff Manor, New York.

This took place in 2002 or thereabouts, when talk of Trump’s running for president had already surfaced once or twice, and after the Supernova explosion of the developer’s empire. Reilly and Trump are accompanied on their round by the developer’s eight-year-old daughter Tiffany and by then-girlfriend Melania whom Reilly describes as “so damn centerfold beautiful she ought to come with staples.” Score one for Trump – a family man. Sort of.

It is clear from the outset that Trump’s particular brand of braggadocio and hyperbole goes way back; Reilly writes, “Trump is mayor of Superlative City.” Everything is the “biggest”, the “best”, the “most incredible” – just like the wall Donald will build to keep out the Mexicans or the military he promises to build. Only, in 2002 he was describing the cheeseburgers at his golf course, cooked by “the best cheeseburger chef on the entire Eastern Seaboard.” He claims the construction of the course required “the largest earthmoving project in the history of Westchester County.” Score two- consistency.

His fascination with himself goes way back too. Stacked up in his office in Trump Tower are Xeroxed copies of magazine articles about himself and his golf courses. As the reporter notes, “He is not just the CEO, he is the greatest public relations agent in the world.” “He understands the value of free publicity,” notes Reilly. The sort of free publicity that thrust him ahead in the GOP race early on, throwing over all assumptions about the role of money in politics. Jeb Bush spent gazillions and got nowhere; Trump has used his celebrity to get incredible free airtime and winds up in the lead. Score three – outstanding promotional talent.

On their whirlwind round of 18, which takes only 3 hours 15 minutes thanks to Trump parking his cart wherever he feels like it (it’s his course, after all), Trump harangues and bullies groundskeepers, the general manager, brick layers and sundry others into making the course even more Trumpalicious. As a result, it is immaculate. Some Spanish-speakers from Chile do such a good job he rewards them with $100 dollar bills – just like that. His attention to minutia is startling, as is his golf. Score four – he gets results.

You get the feeling Reilly is surprised by Trump – how likeable he is. He can see why his wives remain friendly. “The man is flamboyant, creative, energetic, unpredictable, fun and nuts.” And, he doesn’t cheat (much) at golf.

On the other hand, Trump lies and exaggerates about everything. About his businesses, about himself, his accomplishments, how much people like him. Also, “everyone over the age of six can see how attention-needy he is, how full of himself…,” how he demands to be the center of attention. He loves to gamble, plays for keeps and takes huge risks, such as trying to take over American football.

As Reilly negotiated the terms of the interview, he had asked for two days. Trump looked him “square in the eye” and said “Believe me, one day of me is enough.” At the end of the round, after the limo has whisked him back to Manhattan, Reilly sums up: “Loved Trump. Loved the lies. Loved the truths…” And concludes, “One day is enough”.

Doesn’t that say it all? Will we elect Trump only to find three months in that we’re tired of the bluster, the threats, and the insults? Or will his talents make him an outstanding president? We still have no idea.