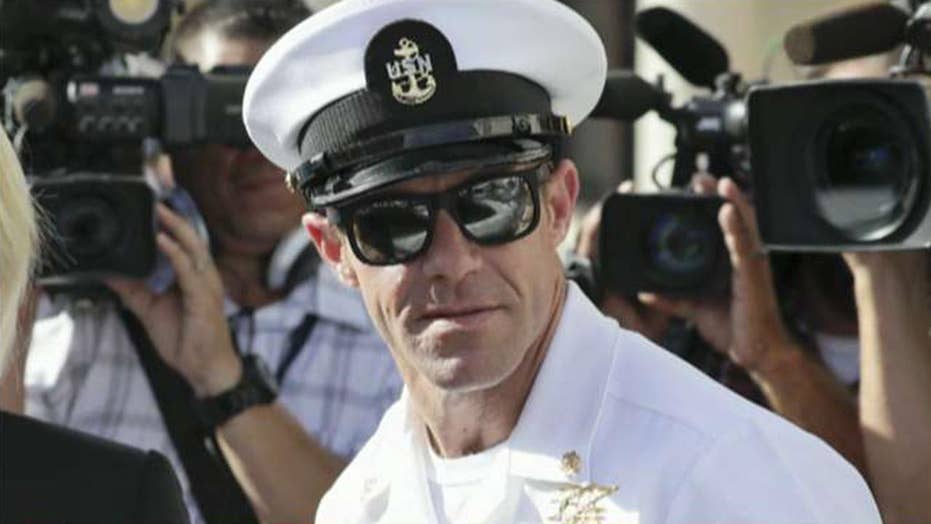 Marc Mukasey talks about what it took to win this case and next steps for the Gallagher family.

Lost in the euphoria of a U.S. Navy jury acquitting Navy SEAL Eddie Gallagher of bogus murder charges are the families of two American Army officers similarly caught up and betrayed by their country – for political reasons only.

82nd Airborne Lieutenant Clint Lorance has served nearly seven years of a 19-year sentence at Fort Leavenworth for the “murder” of two Taliban bomb-makers who his men shot and killed as they charged their platoon on a motorcycle in Afghanistan in 2012.

Major Matt Golsteyn, a Green Beret officer, had already left active duty when he was yanked back in order to prove a political point and now faces a “murder” trial at Fort Bragg for tracking down and killing a Taliban bomb-maker.

Both of these men faced prosecutions to reinforce Obama-era politically correct rules of engagement – suicidal rules that got Americans killed.

What, exactly, are these “rules of engagement?” And what, exactly, did Lorance and Golsteyn do to make the Army so hellbent on prosecuting them?

Simply stated, “rules of engagement” are the rules under which American forces can fire on the enemy. Many rules exist, and they often change, and may apply differently on the high seas, in the air, and on the ground.

But it’s the battlefield rules – where firefights erupt on the ground – that have caused the problems. Many of these rules came under the Obama administration, and two of them in particular – both of which gave the Taliban a huge advantage over American forces – are what have led to Lorance and Golsteyn being prosecuted.

The first is the “disengage upon retreat” rule.

Here’s what that means: Let’s say you are in a firefight with the Taliban. Your buddies to the left and right have been shot. But you’re giving it to the Taliban, and getting the best of them. Then, the Taliban turns tail and runs.

Under the “disengage upon retreat” rule, American forces had to disengage the enemy and let them go, even though the enemy might later return to kill them.

To put it in a nutshell, this is why the Army is mad at Golsteyn. The Green Beret Major tracked down and killed a Taliban bomb-maker who had killed Americans, and who, if left to live, would have killed more.

What? Taking action in battle to save American lives? How dare Major Golsteyn do such a thing?

But he did. And now he faces a “murder” charge.

By the way, under Obama’s “disengage upon retreat” rule, George S. Patton’s entire Third Army would potentially face “murder” charges for chasing and engaging the retreating Nazi Army back to Berlin.

And then, in Lorance’s case, we have the stupid “battlefield lawyer” rule.

The “battlefield lawyer” rule boils down to this: “Don’t fire unless fired upon first.” But if you dare fire first, you must first engage in an on-the-spot, two-fold legal analysis. First, you must ask “is there hostile intent?” If the answer is “yes,” then you move on to the second question and ask “is there a hostile act?”

If the answer to both questions is “yes,” only then could American soldiers shoot first.

Needless to say, by the time our soldiers played battlefield lawyer as a motorcycle, possibly laden with bombs, charged their position at 40 mph – BOOM! – Americans are already dead.

In war, the “battlefield lawyer” rule is about as stupid as it gets. Hesitation gets Americans killed.

This was Lorance’s unforgivable crime. He made a snap judgment, within the course of less than fifteen seconds, and ordered his troops to fire on Taliban motorcycle riders approaching his platoon in a red-hot battle zone.

The nerve of that “war criminal” Lorance! Taking action to save American lives!

In reality, what he took action against were the ridiculous Taliban-first Obama policies. And in both of these cases, corrupt Army prosecutors decided to send a message: If you mess with these (suicidal) rules of engagement (that were set up to get Americans killed) – we’re going to prosecute you for murder.

And that is exactly what they did. First Lorance. And now Golsteyn.

The same Army justice system that glorified traitor Bo Bergdahl and set him free with no time served prosecutes Lorance and Golsteyn for “murder.”

In his 4th of July speech, President Trump encouraged young Americans to join the military.

I agree. As a Navy vet, I love the military. More Americans should serve.

But join to get prosecuted for “murder?” Of the enemy?

The president must step in, set the tone, and end this national disgrace.

Trump should sign an order disapproving the findings and sentencing of Lorance’s court martial, and free him to return to active duty, immediately.

And he should order the Army to drop all charges against Golsteyn.