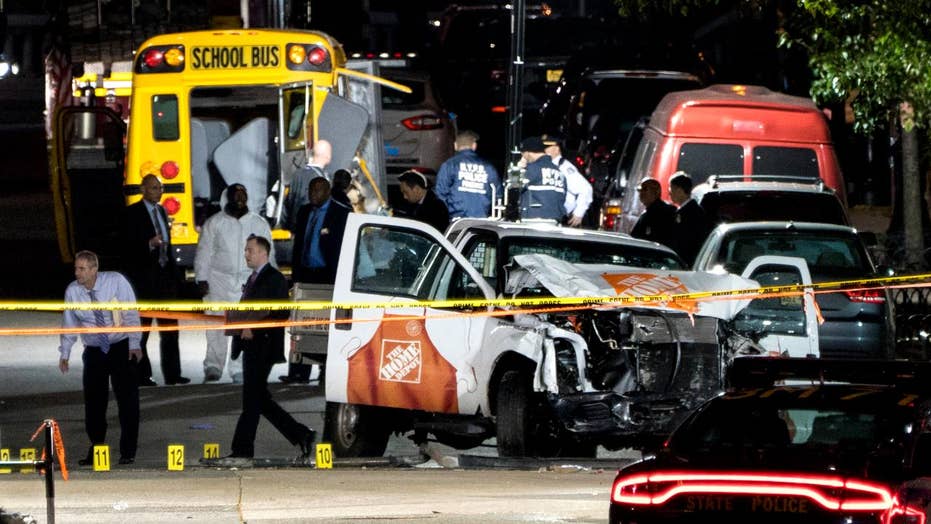 When was the NYC terror suspect radicalized and by whom?

Fox News national security and foreign affairs analyst Walid Phares discusses the questions he would like answered by law enforcement.

When you’re getting dressed in the morning, you look for a shirt in your closet – not your refrigerator. When you want to go out to dinner, you look for a restaurant – not a dentist’s office. And when you’re a cop looking for radical Islamic terrorists … well, let’s just say you don’t look in a convent, a monastery or a rabbinical seminary.

Is this politically correct? Absolutely not. Is it simple common sense? Of course it is.

There’s no question that the vast majority of Muslims in America are peaceful, law-abiding and hardworking men and women. They serve in our armed forces and police departments, teach in our schools, treat us in hospitals, and work in countless other jobs that benefit our nation. We welcome and appreciate them.

A basic principle of police work is that you use logic and common sense when searching for criminals of any kind. You can’t search for everyone everywhere, so you narrow the field of possible suspects. What does the suspected criminal look like – race, sex, height, weight, hair color and style, and so on? Where do you think the suspect might be? These and related questions hold true whether the search is for a robber, a rapist, a drug dealer or a terrorist.

Where might a radical Islamic terrorist be? Well … wild guess … mosques, other areas where Muslims get together, and Muslim neighborhoods. One thing’s for sure: you won’t find any radical Muslim terrorists who are not Muslims.

It does not take a brilliant detective like Dick Tracy or Sherlock Holmes to figure this out. Even the imbecilic film detective Inspector Clouseau could do it.

Yet in New York City last week, where a radical Islamic terrorist drove his truck into innocent people on a bike path on Halloween – killing eight and injuring a dozen – police and other law enforcement officials are being handcuffed. They are being told to ignore their common sense and training, and not focus on Muslims when looking for Muslim terrorists.

New York Gov. Andrew Cuomo has said that the Halloween terrorist – indentified by police as 29-year-old Sayfullo Saipov, a Muslim who emigrated from Uzbekistan – was radicalized here in the United States, not in his home country, which has a history of violent Islamic extremists.

If the governor is correct, than where in the U.S. did the radicalization take place? And before we jump to the convenient presumption that Saipov was “self-radicalized” or a “lone wolf,” we should realize by now that terrorists are not hatched overnight after sitting in their basements watching videos.

No one lives in a vacuum. Radicalization is a process that includes both internal and external catalysts and occurs in many environments. That principle was laid out in a report created by the New York City Police Department’s Intelligence Division in 2006 titled “Radicalization in the West: The Homegrown Threat: The NYPD Report,” authored by Mitchell D. Silber and Arvin Bhatt.

The report was a seminal tutorial on how and where the radicalization of “unremarkable” individuals occurred. It was a vital component of the NYPD’s counterterrorism program until 2016.

But last year Mayor Bill de Blasio caved in to demands from the American Civil Liberties Union and several Muslim activist organizations, including the Council on American-Islamic Relations, and ordered the counterterrorism report removed from both the NYPD’s website and its training manuals.

And if that was not enough, the mayor also ordered the police to discontinue standard police practices of surveillance and undercover operations of the group most susceptible to radical Islamic terrorists – the Muslim community of the greater New York and New Jersey metropolitan area.

De Blasio’s absurd action came in response to a 2012 lawsuit filed in Newark, New Jersey by Muslim advocates. They claimed that the NYPD was profiling them strictly on the basis of their religion and that they had suffered irreparable damages as a result of police actions.

But U.S. District Judge William J. Martini ruled in 2014 that the NYPD’s investigative practices did not violate the Constitution, nor were any damages suffered by the Muslim community. The plaintiffs appealed the decision and the case was to be reheard. Unfortunately, de Blasio then inexplicably surrendered to the demands of those suing the police department and withdrew from defending the NYPD against the lawsuit.

One of the mosques in New Jersey that claimed to have been unjustly surveilled was the Omar Mosque in Patterson. This is the same mosque attended by Sayfullo Saipov, the now-accused self-proclaimed ISIS follower who struck on Halloween.

Yet NYPD Deputy Commissioner for Intelligence and Counterterrorism John Miller stated publicly that the Saipov case has nothing to do with Islam or which mosque someone attended.  How quickly he forgets.

Perhaps Miller needs to go back and reread the 2002 book he wrote titled “The Cell: Inside the 9/11 Plot and Why the FBI and CIA Failed to Stop It.” Back then, he clearly acknowledged the obvious fact that that radical Islamic terrorists have connections with Muslim communities.

And as if to add insult to injury, New York City has agreed to an amendment to a court decision that oversees police intelligence investigations of political and religious organizations. De Blasio will now appoint a civilian monitor who will have oversight over who the police department can or cannot investigate.

Perhaps the Army will next follow suit and appoint civilian monitors to determine where and when it can fight radical Islamic terrorists in Afghanistan and Iraq. That would make as much sense as the de Blasio policy.

Here’s the bottom line: We need to spend less time worrying about being politically correct and more time worrying about how to protect the American people from bloodthirsty radical Islamic terrorists who want to kill and injure as many of us as possible.

At some point, we have to let the police be the police and investigate terrorists and other criminals – regardless of religion, ethnicity or race – based on tried and true procedures.

Good police investigative work in years past resulted in many arrests against criminal organizations like the Mafia and Colombian drug cartels, even though Italians and Colombians were disproportionately represented in these groups. It would have been as silly to search for Mafia kingpins in mosques as it would be to try hunting down ISIS terrorists at Knights of Columbus meetings.

Good police work can be effective against Islamic terrorist groups like ISIS and Al Qaeda, which often infiltrate the Muslim communities in the United States, only if police are allowed to do their jobs.

Hopefully, the NYPD under the current leadership of Commissioner James O’Neil, a career cop, will be allowed to go where the evidence leads, utilizing every tool at its disposal and not bow to political correctness when investigating potential terrorists and their hideouts. Perhaps the tool most needed in fighting radical Islamic terrorism today is a strong backbone.