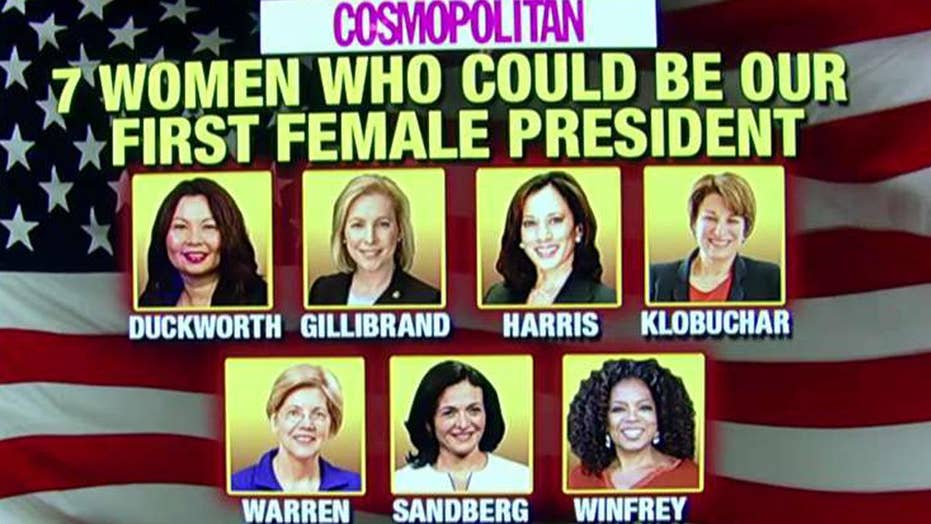 The publication is being blasted for its Democrat-only list of 'women who could be' president; reaction on 'Outnumbered'

At the White House male staffers earn more on average than female staffers. That is not news.

However, it is ammunition for those looking to take a shot at President Donald Trump using the charge that this administration doesn’t care about women. But a closer look at the White House wage gap reveals that the Trump Administration – like other recent administrations – pays women fairly.

On Friday, the White House sent its annual staff report to Congress on the 377 people working there including their names, titles, and salaries. Real estate investor Reed Cordish along with Ivanka Trump and her husband Jared Kushner earn nothing. Reince Preibus, Kellyanne Conway, Steve Bannon and almost 20 others maxed out the salary ceiling earning $179,700.

CNN decided to analyze this year’s White House salary data (a curious decision since they had not analyzed the previous administration’s staff data). They found that the average salary among male staff was nearly $104,000 compared to $83,000 for female staff. The Trump White House pays women 80 cents for every dollar they pay men. What’s worse, this is 2 cents bigger than the reported national average pay gap.

CNN leads us to the conclusion that President Trump is a bad boss for women. But he is not the first President to preside over a pay gap in his White House. Despite President Obama’s rhetoric about equal pay for equal work, he couldn’t close the 13 percent wage gap in his office for most of his term. In fact, women earned less than men on average at the White House all eight years of the Obama Presidency.

In all of these instances, and in the economy at large, men earn more than women on average. But importantly, this is not primarily due to sex-based discrimination.

Calculating averages conceals the nuances of the pay at the White House and in the workforce at large. The White House data don’t show that men and women working in the same jobs are getting unequal pay. They do show that there are more men working in higher-paying positions. An apples-to-apples comparison of positions at the Trump White House confirms what previous White Houses have said: there is equal pay for equal work.

That is an important clarification, because it demonstrates what is happening in the broader economy. The oft-cited Department of Labor statistic that women earn only 79 cents of what men make provides an incomplete picture. It compares the average salaries of all men and women with full-time jobs, but averages miss factors that can have a significant impact on the wage differences.

When the Department of Labor controlled for other factors such as occupation, the number of hours women and men work, and the time women they take off from the workforce, the difference in pay shrinks to a few cents.

This is not to say that sex-based wage discrimination never happens. But it is clear that discrimination is not the primary driver of the wage gap. Discrimination is illegal and has been since 1963, and violators should be prosecuted to the full extent of the law.

If we want to start a serious conversation about opportunity and pay for women in the workforce, including at the White House, we should stop pretending that the wage gap is evidence of discrimination. It’s not.