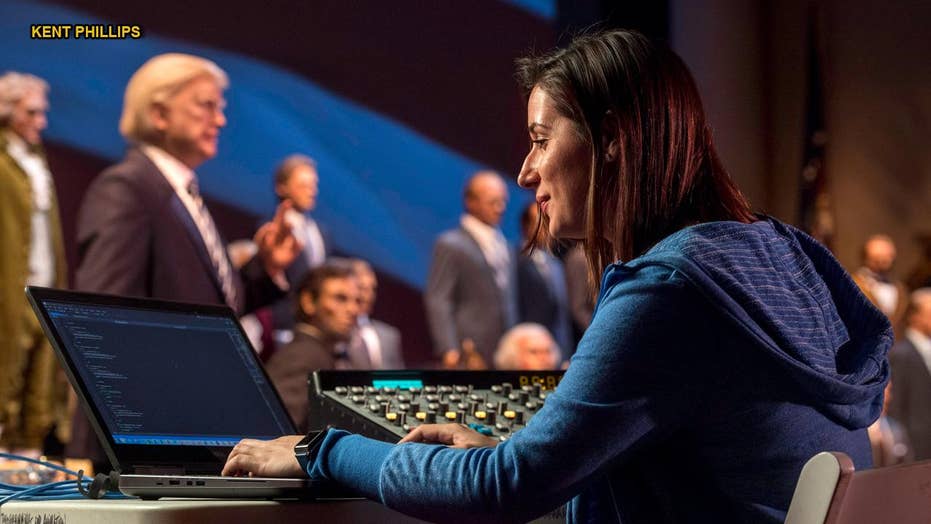 Did Disney mess up their new animatronic Trump?

Reviews are mixed on the look of the new animatronic Donald Trump in Walt Disney World's Hall of Presidents.

Is there any spot left in America where we can get away – for at least just a little while – from leftist hysteria?

It’s getting harder and harder. Even at the home of Mickey Mouse.

Disney World in Florida is a special place that attracts about 52.5 million children and adults each year for days of family fun at what it calls “the most magical place on Earth.” But the theme park was unable to offer its guests an escape last week from a truly bizarre protest against President Trump.

A man who clearly was no Trump fan started screaming “LOCK HIM UP!” over and over again when a robot portraying President Trump at the Hall of Presidents attraction began “speaking” with the recorded voice of the real President Trump.

Malsky's message is clear: even children don’t deserve a peaceful holiday if they happen to be born into “privilege.” They should have chosen more wisely when picking their parents, no doubt.

No one locked up Robot Trump. And although no Robot Secret Service Agents were around, actor and comedian Jay Malsky was apprehended by security staff members and escorted out of the attraction when he wouldn’t stop screaming.

Other audience members, presumably including children and their parents trying to enjoy their holiday vacations, had tried to get Malsky to stop ruining the performance for them, but to no avail.

Malsky helpfully recorded his protest for posterity and posted it on Twitter. Perhaps he hopes it will bring him fame and a great boost for his career, which includes sometimes performing in drag as Hillary Clinton, according to his website.

In fact, in earlier tweets, Malsky contemplated throwing an object or perhaps attacking Robot Trump in some way. Apparently, he doesn’t believe in the free speech rights of robots any more than he believes paying guests have the right to enjoy a day at a theme park.

Malsky’s response was the best part of all. In a statement to TheWrap, he said people should “check their privilege” if they are upset by his antics.

“Anyone that’s upset I disrupted a family vacation can check their privilege and consider getting mad about the thousands of children being taken away from their parents because of Trump’s racist immigration policies, or the families of the hundreds of trans Americans murdered each year by transphobic and homophobic people, or the negative impacts of the tax bill on poor and middle-income Americans,” Malsky said.

His message is clear: even children don’t deserve a peaceful holiday if they happen to be born into “privilege.” They should have chosen more wisely when picking their parents, no doubt.

While it’s easy to dismiss Malsky’s protest as just a stupid stunt, it’s worth noting that the philosophy driving Malsky’s actions is right on par with progressive thought.

For many progressives, Americans are not individuals – each unique and special in his or her own way. Your skin color, gender, sexual orientation and socioeconomic status are what’s most important. The more “privileged” you are in those domains, the less respect you are due.

So long to the days when individuals are judged by their character. In victimhood politics, all that matters is the situation you were born into.

Orlando, Florida, USA. December 27,2014. Sunny day with Cinderella's Castle at Walt Disney World. Picture was taken on one of the busiest days of the year as evidenced by the crowd of people in front of the castle. (Getty Images)

Now, more than ever, it’s important that real American patriots continue to teach the true spirit of our country: that all people are worthy of respect until they prove otherwise. If we as nation don’t recover and protect that principle, protests such as these will continue and become the norm.

As for Malsky, his 15 minutes of fame will probably pass soon enough. If he’s lucky, maybe Disney World will open a Hall of Hecklers and give him a job. Or maybe he can tour the nation, screaming “LOCK HIM UP!” at statues and monuments he doesn’t like.

Hey, but at least Malsky’s screaming match says one good thing about the greatness of America. If he tried the same stunt in Russia, Iran, China, North Korea or a lot of other nations without the freedom of speech Americans enjoy, he’d probably be spending the next several years behind bars, after a government judge ordered: “LOCK HIM UP!”