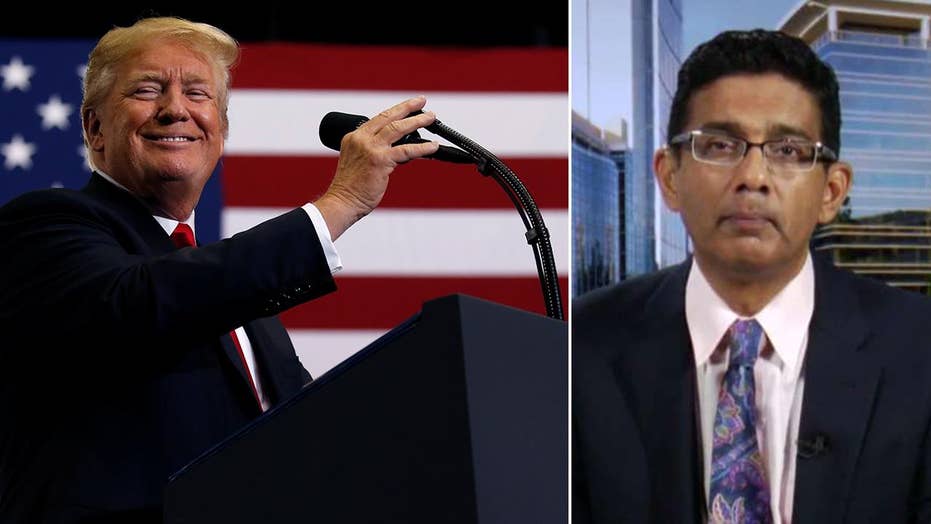 Dinesh D'Souza opens up about being pardoned by Trump

Conservative filmmaker sits down for an exclusive interview with 'Fox & Friends.' D'Souza says he is grateful to President Trump for giving him his rights back.

On Wednesday I was working in my office when the phone rang and the operator announced: “Please hold for the president of the United States.” I resisted the impulse to make a joke: “I’m in the middle of something. Can you let him know I’ll call him right back?”

President Trump came on, and told me he was sitting in the Oval Office with White House Chief of Staff John Kelly.

“You know John, don’t you?” the president said. I sheepishly said I didn’t, but of course I knew who he was. President Trump said I was a great voice for freedom and for America. Then he added: “Dinesh, I got to tell you, man to man, that you got screwed.”

President Trump said I did something that would normally get a slap on the wrist and a fine, but instead the previous administration went after me with the full force of its powers.

President Trump termed my case as an injustice, one that he was in a position to correct. And then came the words that I had to repeat to myself to fully grasp their significance. “I’ve decided to give you a full pardon.” 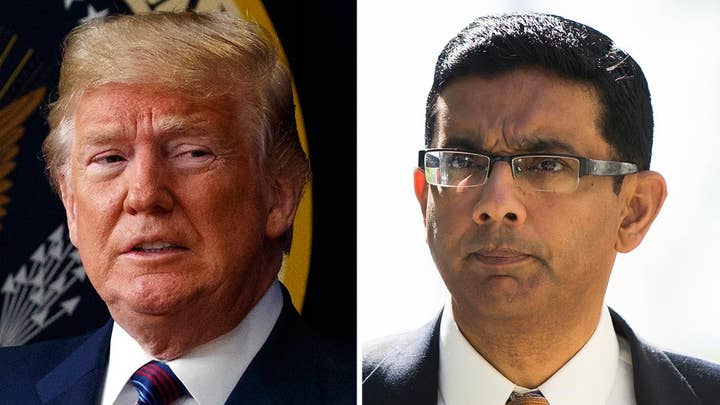 The president said this would clear my record “and now you can be an even bigger champion of freedom than before.”

I could do little more than mutter my grateful astonishment.

Later, the president told the media that he thought I was having a heart attack. Actually, I was just tongue-tied with joy. And the conversation ended with President Trump saying he would make his decision public the following morning, not with a news release but with a tweet.

For me, the pardon was the exhilarating conclusion to a five-year ordeal.

In 2012, in an attempt to help my longtime college friend Wendy Long, who was running as a Republican for the U.S. Senate in New York, I asked two of my associates to donate $10,000 apiece to her campaign. Then I reimbursed them. In doing so, I broke the law by exceeding the campaign finance limit.

Now it is an open secret that campaign finance limits are regularly transgressed just about every election season. Yet such cases are rarely prosecuted. In general, the government only goes after chronic or repeat offenders, or after those who break the law with corrupt intent, seeking to buy favors or obtain some sort of quid pro quo.

While O’Donnell’s motives were not corrupt, she certainly is a repeat offender. Consequently, there are five times more reasons to prosecute O’Donnell than there were to prosecute me.

No corruption or quid pro quo was even alleged in my case. In fact, candidate Wendy Long didn’t even know that I had contributed $30,000 instead of the allowable limit of $10,000.

How, then, did the decision to prosecute me come about?

Some clues are contained in my FBI file. A congressional oversight committee tried for well over a year to get this file. The FBI, then under since-fired Director James Comey, refused on familiar pretexts: claims that my file would reveal confidential sources, contained information that would jeopardize the bureau’s work, blah, blah, blah. Finally, the FBI relented and provided a redacted version of the file.

The file reveals that as soon as the FBI learned about my situation – how it found out is still unclear – the agency allocated $100,000 to investigate case involving $20,000 of political contributions. This by itself is odd.

The oddity, however, disappears with another revelation in the file. The FBI from the outset red-flagged me as a prominent conservative critic of the Obama administration.

Why is this information about my political views even in my file? How is it relevant? The obvious answer is that the FBI was signaling to the Obama Justice Department – in other words, to Attorney General Eric Holder – that here was a political adversary that the Obama team might want to go after.

And that’s why the FBI was so reluctant to give up the file. It didn’t want the Republicans in Congress to discover the bureau’s corrupt modus operandi.

The stage was set for my prosecution, carried out by the Department of Justice and directed by Preet Bharara, U.S. attorney for the Southern District of New York.

Bharara tweeted Thursday that while President Trump has the right to pardon anyone he wants to, the fact is that I voluntarily pleaded guilty to a felony violation. Bharara’s logic is clear: why would someone who did not intentionally break the law publicly confess that he broke the law?

Here’s why: Bharara’s prosecutors charged me with exceeding campaign finance limits. But when they learned that I might plead not guilty, they threatened to add a second charge. What, you might wonder, was this second violation?  What else did I do wrong?

The second charge I was threatened with was called filing a false document. Evidently, I did this by not revealing that I was the source of the contributions made in the name of my associates. In other words, this charge was just another way of describing the first charge.

The difference, however, is that the first charge carried a maximum of two years in federal prison, while the second charge carried up to five years. The bottom line was that the federal government was threatening me with a sentence so severe it would ruin my life.

Then members of Bharara’s team said that if I pleaded guilty to the first charge, they would drop the second. They bludgeoned me into submitting to a lesser sentence rather than risk complete professional and personal destruction.

While this is a standard tactic used by prosecutors – it is the single factor that explains why federal criminal cases have a conviction rate approaching 100 percent – it’s important to realize that the government is pressuring not only the guilty, but also the innocent to plead guilty.

I find it almost comical to see Bharara put on a straight face and present the outcome of strong-arm bullying as “voluntary” confession. One has to be utterly naive to fall for such deceit.

My only consolation is that Bharara’s whole scheme has collapsed. He tried to destroy a fellow Indian-American’s life out of naked political ambition. Then President Trump fired him and pardoned me!

Bharara is discovering the ancient Indian wisdom contained in the modern American saying that “karma is a bitch.”

My case, alas, represents a grotesque miniature of what American politics has become. It wasn’t always this way.

But with President Obama and Hillary Clinton, we’ve see a gangsterization of politics in which the organs of the state – the FBI, the Internal Revenue Service, the Justice Department and so on – are deployed against ideological adversaries.

I’m glad to be out of the clutches of these nefarious characters, including the judge appointed by President Clinton who included in my sentence mandatory psychiatric counseling. This is a man who thought he could supervise my “re-education,” which I guess would be confirmed in his mind if I went to work for the Clinton Foundation or started making regular appearances on MSNBC.

Eventually, to his dismay, the judge gave up on his little Stalinist project and confessed that I could not, by his standards, be rehabilitated.

Now I’m free. No longer does the ominous phrase, “United States of America versus Dinesh D’Souza” ring in this immigrant’s head. My American Dream and my faith in America are now fully restored.

Thank you, President Trump, for making this happen.